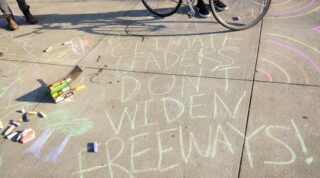 A popular mantra in Portland these days, chalked outside Tubman Middle School at a rally in April.
(Photo: J. Maus/BikePortland)

Two freeway expansion projects that were due to be approved by Metro Council at a meeting today (7/29) have been taken off the agenda and will be given their own meeting next week. The change is notable because, as we shared last week in an opinion from transportation and climate change activist Chris Smith, the items were previously on a consent agenda which meant there would be no formal vote or discussion.

The newly scheduled meeting on Tuesday at 2:00 pm (8/3) takes the controversial resolutions out of a consent agenda and they will now be discussed and voted on by Metro Council members separately. It’s not a public hearing, and public comment will still only be taken at the start of the meeting, but the move is a small win for activists who’ve flooded Metro Council with concerns about the projects.


Freeway expansion projects that will lead to more driving have become the focus of increased scrutiny from a growing number of activists who see a clear connection between transportation-related greenhouse gas emissions and climate change. As our state is engulfed in wildfires for the second year in a row and our region reels from yet another heat wave, activists have stepped up pressure on local officials to stop doing business as usual.

To give you an idea of just how much the tone has sharpened on this issue, Smith (a veteran policy wonk, founder of No More Freeways, and former member of the City of Portland Planning & Sustainability Commission) recently said Metro’s Regional Transportation Plan is a “suicide pact” because of all the projects it contains that will make it easier to drive cars and trucks. The RTP is a powerful, federally-mandated document that lists all the region’s top priority projects. Smith’s comment reflects a sense that climate change is evolving at a much faster rate than government and it’s time to re-assess previous project priority and funding decisions to reflect this new reality.

Smith has pushed agencies like Metro as well as the Oregon Department of Transportation and the Portland Bureau of Transportation to reckon with their support of highway expansion projects. In March 2017, Smith narrowly forced the Portland City Council to take a high-profile vote on the I-5 Rose Quarter project, only to have Metro Council approve $129 million for it two years later.

At the Metro Council meeting Tuesday, Smith is likely to be one of many people who testify against two more of ODOT’s freeway projects: the widening of I-217 and I-205. Youth activists with Sunrise PDX made their voices hard to ignore when these projects were approved by a Metro advisory body earlier this month.

We’ll have our eye on two of the three resolutions at next week’s Metro meeting. Both of them are changes to the Metropolitan Transportation Improvement Program (MTIP) that require Metro Council approval.

Resolution 21‐5188 is an MTIP amendment that includes an approval of ODOT’s $134 million OR-217 expansion project, that will add lanes to Highway 217 between Beaverton and Tigard (just a few miles southwest of Portland) and expand SW Hall Blvd. Metro’s vote won’t add new funding or make other substantive changes to the project. It’s largely just an administrative step the project needs to move into construction.

The other agenda item we’ll be watching is Resolution 21-5192. This amendment adds a new project worth $375 million to the MTIP that will allow ODOT to add lanes to I-205 on and around the Abernethy Bridge. This new money comes thanks to House Bill 3055, which gave ODOT the ability to spread around an existing, $30 million per year in annual funding that was previously set-aside only for the I-5 Rose Quarter project. HB 3055 also increased ODOT’s short-term borrowing authority from $100 million to $600 million and gave them more time to use project bonds. The bill passed the Oregon Legislature last month amid significant pushback from climate and transportation activists who warned it would be used as a “slush fund” by ODOT to build more and wider freeways.

Asked why these items were moved from today’s Metro Council meeting, Metro Public Affairs Specialist Nick Christensen told us they made the move because key members of council and staff — Council President Lynne Peterson, Deputy Council President Craddick (who is also chair of JPACT, a Metro transportation advisory body), and Acting Planning Director Margi Bradway — are all on vacation this week.

View meeting details and find a link to the full agenda and meeting materials at OregonMetro.gov.

Good. While this is really just a formality and a rubberstamping of what the state legislature has already passed, it is important to ask our elected officials to explain in public why they consistently vote against the goals and values they profess to have.

As the sinister neighborhood association chanted in Hot Fuzz, “It’s all for the greater good.”

I’m curiousness. What happens to the formality if they refuse to stamp the stamp?

Good question. I believe that federal money flows through the MTIP, which Metro oversees in the region and state money goes through the STIP, which ODOT oversees. The MTIP is incorporated into the STIP. Metro is being asked to amend the MTIP to include the state funding for these highway projects. This is money that will be programmed in the STIP anyway so I’m not sure if a no vote on the MTIP would really matter other than perhaps opening things up for lawsuits. That is my clear as mud, possibly incorrect answer.

Federal grant money goes into both MTIP and STEP, and numerous other programs, as do state funds, plus local city and county match for certain projects. In the very unlikely chance that Metro actually rejects certain projects and/or federal funding, the unused funds go first to other Oregon MPOs and districts for use with the same strings attached; any remaining unused funds are then available for other states to use (like California or Maine.) There are always some states that really do reject a portion of their federal funding for various complex reasons, but there’s always many other states eager for more federal grants than they are normally authorized to get.

Well, like that Exxon Mobile executive said recently, “Of course we support efforts to reduce fossil fuel dependency because we know it will never happen.”

Vote Up0Vote Down  Reply
« Oregon has a new plan for the legendary Coast Bike Route
Happy Birthday to us! BikePortland is 16 years old today »