Oregon has a new plan for the legendary Coast Bike Route 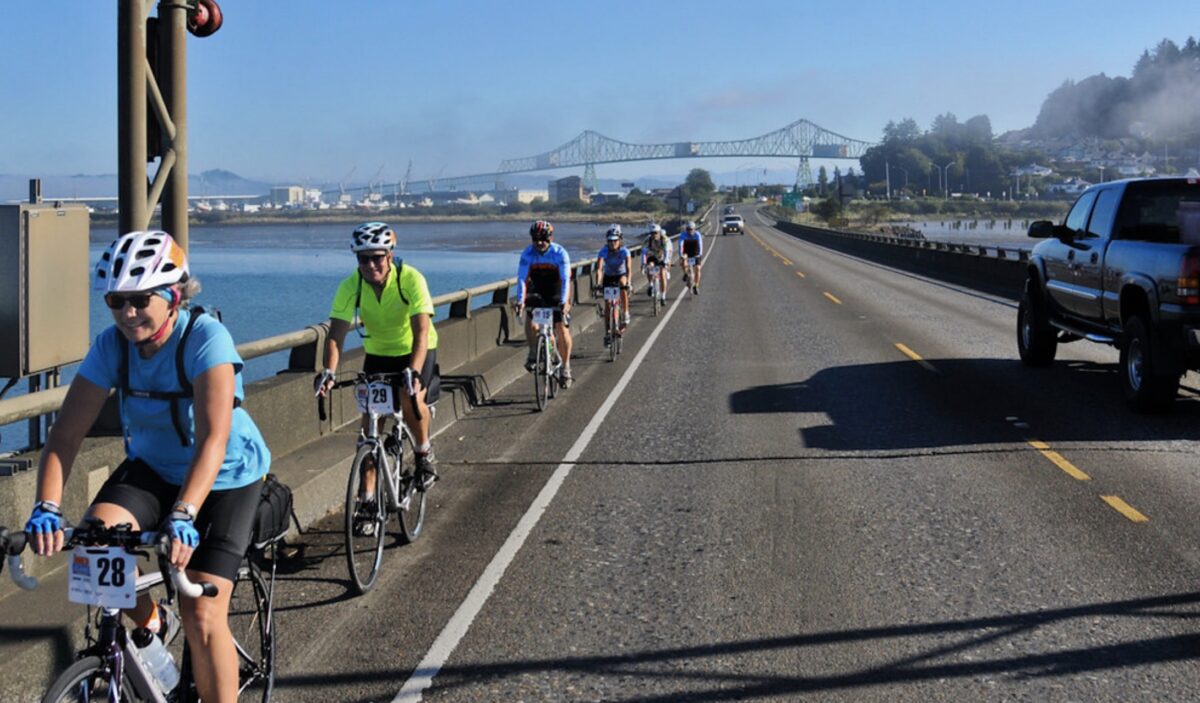 Riding across the New Youngs Bay Bridge in Astoria. The plan designates an alternate route to avoid it.
(Photo: J. Maus/BikePortland) 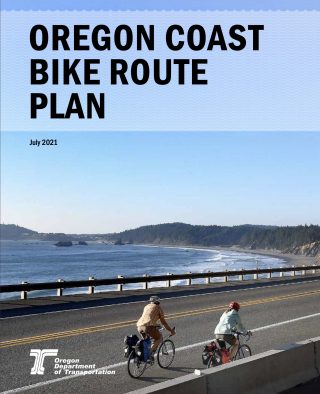 After years of planning and outreach, the Oregon Department of Transportation has completed the Oregon Coast Bike Route Plan. It’s the first ever comprehensive update to this legendary, 370-mile route and it includes new policy, route and design recommendations, as well as an accompanying bike safety marketing campaign.

Officially designated in 1982, the Oregon Coast Bike Route (OCBR) currently welcomes between 6,00 and 10,000 riders each year. While it’s a memorable, bucket-list route for many, it’s also known to be severely lacking as a safe facility that’s suitable for all types of riders (I shared the good, bad, and ugly of the route in 2013). The OCBR aims to change all that. 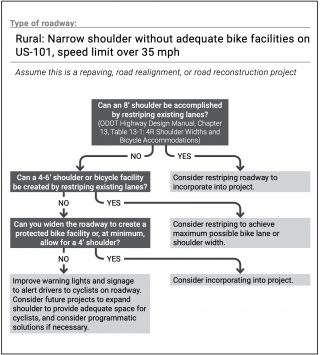 The 31-page plan and its seven appendices lay out a road map for how local and state officials can improve the route and capitalize on its potential as a corridor for human-powered transportation and tourism. The three main parts of the plan include; a list of reroutes and alternate routes, a list of 35 critical needs, and a guide to roadway designs that would vastly improve the cycling experience.

ODOT staff and their consultants have identified 13 new or alternate routes that will make the OCBR more fun and less stressful. A new recommendation going south from Astoria for example, uses two inland roads instead of Highway 101 so riders can avoid the busy traffic and narrow shoulders on the New Youngs Bay Bridge (in photo, above). Another new change puts the official OCBR onto the historic pedestrian promenade in Seaside, instead of the busy highway.

To help ODOT engineers, planners, and local officials decide how best to update roads on the OCBR, the plan includes a Decision Making Framework for four different roadway scenarios (one example at right). This framework takes policymakers, “through the considerations needed to improve places to bike and meet current standards.”

As part of this plan update, ODOT also worked with a consultant team to create an OCBR Safety Education Campaign. Through a series of graphics and images on billboards, posters, and other media, the campaign hopes to encourage considerate interactions between drivers and bikers during peak riding season.

Throughout the plan, ODOT staff took time to point out that this route isn’t just for tourists. “Improvements will yield dividends beyond the economic development impacts from bike tourism,” the plan states. “Including providing local residents safe ways to get around without needing to drive and the public health benefits that comes with increased physical activity.”

And while this plan is a strong first step, implementation always comes down to local political conditions and ODOT’s ability to push the right projects through. Case in point is a major setback last week from the city of Depoe Bay (about halfway between Lincoln City and Newport). As reported by the Newport News-Times, local officials killed a long-awaited ODOT project that would have updated a popular section of Highway 101 near whale watching and shopping destinations with sidewalks and bike lanes because they feared economic impacts of less auto parking.

Perhaps a copy of this plan could be sent to the four members of the Depoe Bay City Council who voted against the project?

The plan is currently in draft form and is expected to be officially adopted by the Oregon Transportation Commissioner later this year. You can download it at the bottom of this page.

That’s really too bad about Depoe Bay. It’s a nice town and would be even nicer with bike lanes. My recollection is that the parking is all diagonal, so there should be plenty of space even with parallel parking or parking on one side.

Looks like this may add some significant hills to an already hilly route. Still, if there are safer route options this could be a net positive

The Coast Route is always going to have deficiencies, they really can’t make the road much wider, it’s full of RVs and other vacationers not to mention the tunnels and the usual local Oregon traffic like log trucks, contractors, etc. Any detours are likely to involve less traffic (but not none) and more hills.

The detours will almost certainly be longer also. IMO they can designate alternate ‘scenic’ routes, but the main through-route should continue to be accessible to and maintained for cyclists. But ODOT’s recent move to install rumble strips on many primary routes is not a good sign.

I agree, there are many scary stretches where there’s no shoulder at all and you have to ride the fog line while being passed by RVs. Even a guaranteed two feet of shoulder the whole length of the route would be a huge improvement. Hat tip to the professional truck drivers, who were cautious and considerate on my trip down the coast.

I like ODOT’s Oregon Coast Bike Route Plan brochure. Pristine view of road without a car in sight. How’d they do that?

There are parts of the coast with high poverty and have staggering challenges in transportation and few local services. Increasing bike friendliness can bring a big improvement in quality of life for those folks. Hope it all comes into being!

Hm… I wonder if this is even remotely plausible.
Tourism is inherently hierarchical, unequal, and rarely benefits the locals.
I note (and not for the first time here) that the willingness to invest in biking-for-tourists seems in certain bureaucracies frustratingly easier than investing in biking-for-folks-trying-to-get-somewhere.
$$ for tourists (and the $$ they are anticipated to spend) is a far cry from taking cycling seriously and investing in it *as transportation*.