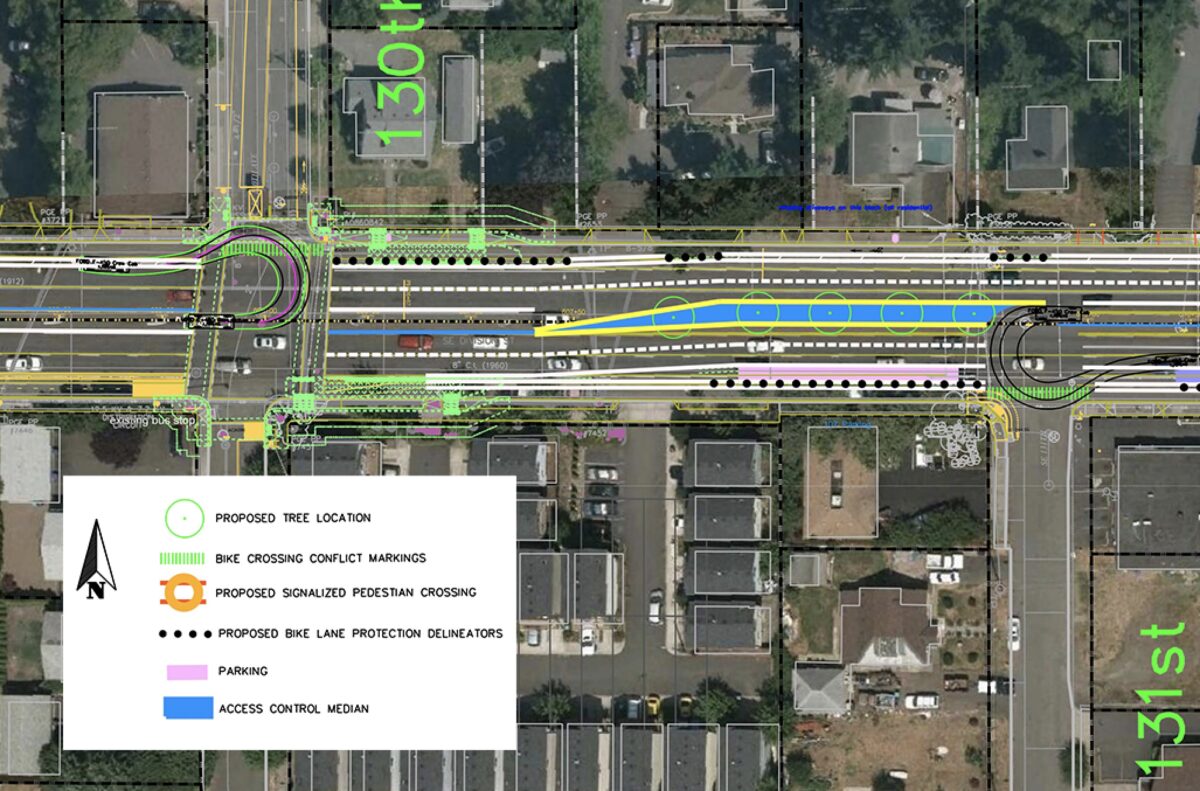 After years of preventable death and destruction and countless hours of advocacy and planning, the Portland Bureau of Transportation announced this week that the completion of the Outer Division Multimodal Safety Project is imminent. PBOT says construction has begun and will continue through summer 2022. The project will reconfigure lanes and add safety measures on 4.6 miles of Division Street between 82nd and 174th (city limits).

The project will maintain two through general purpose lanes in each direction and will widen and add intermittent protection to the existing bike lane by removing space for on-street parking. The new bike lane will be curbside (except for intersections) and will be protected by a combination of paint, buffer space, plastic bollards, and/or parked cars (initial plans included no on-street parking, but PBOT added back some parking in response to public feedback). The most prominent feature of the project will be the planted and raised center median islands that will be installed to control driver movements.

When combined with the Division Transit Project (which TriMet says is at 70% completion and is due to open in Fall 2022) and an Oregon Department of Transportation project at the I-205 interchange, we might finally tame traffic on one of the most notorious arterials in the region. PBOT data shows that 1,000 people are involved in crashes annually within the project boundary. “If you lined up all the cars that have been crashed on Division [in this section] in the past five years, they’d stretch from Portland City Hall to downtown Gresham… That’s almost three people every day whose lives are changed as a result of this dangerous street,” states a PBOT document from 2016.

When this project first materialized in 2016, it was billed as a demonstration of PBOT’s commitment to Vision Zero. PBOT was under extreme pressure from the community to improve safety that year due to a spate of deaths and injuries on Division. In December 2016, road safety activist group Bike Loud PDX held an event on Division near SE 86th where people stood in the busy street and placed hay bales in the lanes to force drivers to slow down. Two months later, PBOT responded with an apology and a plan to do something about it.

We last checked in on this project in 2018 and reported the changes would be on the ground by the end of 2019. The years of delay likely came due to a necessity for coordination with TriMet and their major Division Transit Project.

Yesterday PBOT shared a new video (above) about the project and said it would be done by summer 2022.

In addition to protected bike lanes and raised center medians, the project will include: major signal upgrades, sidewalks, street lighting, and more.

As you can see in the video, the new medians will require drivers to make a lot more u-turns to access destinations. During design of this project, the turning radius of drivers was flagged as a concern. This is because u-turns will lead to some drivers — especially those with large trucks and SUVs — to encroach into the bike lane. PBOT staff has been aware of the concern for a long time. In 2017 PBOT said they’d use special pavement markings to warn people of the turning hazard. This u-turn encroachment is clearly shown in official plan drawings, but is not shown in the video above (see GIF).

Unfortunately the image at the top, showing five trees in the median, is not what’s going to be built. Due to the presence of sewers main in the middle of the street there won’t be any trees in the median, except for one block between 84th and 85th. Everywhere else the median will just be concrete. That will create a safety benefit to be sure, but not a streetscape that’s much more pleasant than what previously existed.

Ugh. That’s terrible to hear. We really need all the visual changes we can muster to make these wide arterials feel different and more welcoming. Fingers crossed that this and the other projects combine for a real impact. Maybe this can be somewhat of a template for how TriMet/PBOT approach 82nd?

Unlike 82nd or 122nd, there is a huge water main (aqueduct) down the center of outer Division, unfiltered water from Bull Run. We did suggest PBOT put trees in the parking lanes on Division, but that’s apparently too innovative for PBOT to consider.

Could they at least put some ferns in the median or something? Even that would be way more appealing and welcoming than a concrete median. A lot of cities in the southwest like Tucson and Albuquerque do this with desert plants in the median and it makes the streets seem so much nicer and inviting for active use even though it’s no functional difference at all.

Very disappointing that PBOT would try to blatantly mislead us like this.

I can totally understand why BES wouldn’t want trees planted on top of their infrastructure, but I’d have thought that low grasses, ferns, shrubs or something would have been fine.

Container shrubs or small trees could work maybe? They’d need to be concrete containers so they still act as anchors/barriers to minor traffic incidents, but not so awkward that they cannot be easily moved with a forklift or a backhoe with a hook and chain. Just spitballing.

I applied for a street tree permit in 2016, the city marked spots, then an engineer called to say they couldn’t be planted due to a new regulation: No trees within 10’ of major water mains. We’ve got one 8’ away in the street. He said it was an unfortunate ruling that affected thousands of properties and potential future tree locations. I always wonder about that regulation whilst envisioning streets lined with newly planted trees.

Obviously an ideal regulation for limiting future maintenance issues, but not ideal for the decades of living before roots grow that far and become an issue. Was also silly in our case as we had a power line above, so we were just planning to plant smaller trees, not sequoias. But, we could plant those a few feet further away, in our front yard.

There’s already some amount of center median, “protected” intersections, and lots of paving and striping done in the eastern section of this project. What parts exactly are PBOT or TriMet is not something I know. Areas currently under construction don’t appear to have much in the way of accommodations for anyone not driving and are sometimes confusing even when driving. The bike lanes are packed with parked cars around 130th-140th Ave or so. The effectiveness of the protected intersections is only as high as the willingness of drivers to obey “no turn on red” (see also Steel bridge on-ramp and Better Naito).

I’m still looking forward to the overall improvement. Even just smooth pavement and fresh paint between 82nd and I-205 would be amazing compared to the “explosives testing ground” look it’s currently going for. There are a lot of sketchy bike lanes I’ll ride in and Division usually isn’t one of them in its current state. Also hoping that some of those center medians will make cutting through side streets slow enough that map apps stop telling people to do that.

This is a culmination of a process started in 2010 when we got some sidewalk infill on Division between 148th and 174th thanks to Sam Adams and EPAP. In 2012 we got funding to fill in the rest of the sidewalks and add buffered bike lanes, and then we got 9 years of excuses from PBOT on why those very modest improvements were being delayed. Meanwhile bucolic Gresham banned all parking on their portions of Division and added buffered bike lanes.

Questions–starting at 2:38, the video describes how the median will be cut open to create a “legal unmarked crossing” for pedestrians. Is it really legal? And whether it is or isn’t, is it safe?

The crossing is between a corner at the top of the video to mid-block at the south. Clearly, by law it would be a legal unmarked crossing if it were from a corner to a corner at a standard intersection. But is this even an “intersection”?

Mid-block crossings (which this is at one side) appear to be legal crossings “only when marked with painted white lines”:
https://www.oregon.gov/odot/Safety/Documents/OregonCrosswalkLawsENG.pdf

So I don’t think it’s clear at all that it’s a “legal unmarked intersection”. A break in the median certainly doesn’t establish one.

But even if it IS legal, who’d know that? The video shows someone starting to cross at the top, where there’s a corner, so that’s clear to people driving on Division heading from right to left. But if someone was crossing the other direction, starting midblock at the bottom, all a driver heading right (east?) would see is someone stepping off the curb at mid-block. Who’s going to stop for that pedestrian? What I imaging is a pedestrian standing in the bike lane, waiting and waiting for a driver to stop, then when they start to walk across, the next driver will swerve around the stopped on and kill the pedestrian.

This unmarked midblock crossing seems possibly not a legal crossing, but definitely a dangerous one.