It’s nice to be back in Portland after a family vacation in Florida! Huge thanks to BP team members Lisa Caballero and Maritza Arango, and contributor Ryan Packer for keeping things together while I was away.

Even though my focus was on family and I tried my hardest not to think about work, I couldn’t help but point my camera in the direction of bikes while on walks and excursions. Documenting people riding bikes and bike culture in general in other cities is one of my passions — and there was plenty of it to document in Miami and Key West.

So, in the tradition of past trips we’ve shared to places like New York City, Colombia, Copenhagen, La Paz, Guadalajara, and Amsterdam, here are some photos and thoughts from my trip…

Everywhere we went in Miami, I was pleasantly surprised by how many people I saw riding bikes (This was my first time on Florida’s east coast. I’ve been on the Gulf side several times.) Given Florida’s terrible reputation for road safety, its preponderance of massive highways, high-speed arterials, and general lack of protected biking space, I expected urban riders (as opposed to beach cruisers) to be few and far between. I was wrong! There’s a strong and very diverse bike culture in and around Miami. I saw a thriving fixed-gear/messenger scene; lots of speedy, spandex-clad, racer-types; lots of tourists on bikes; wheelie kids (for lack of a better term); and the biggest group of all: regular folks just getting around on two wheels. 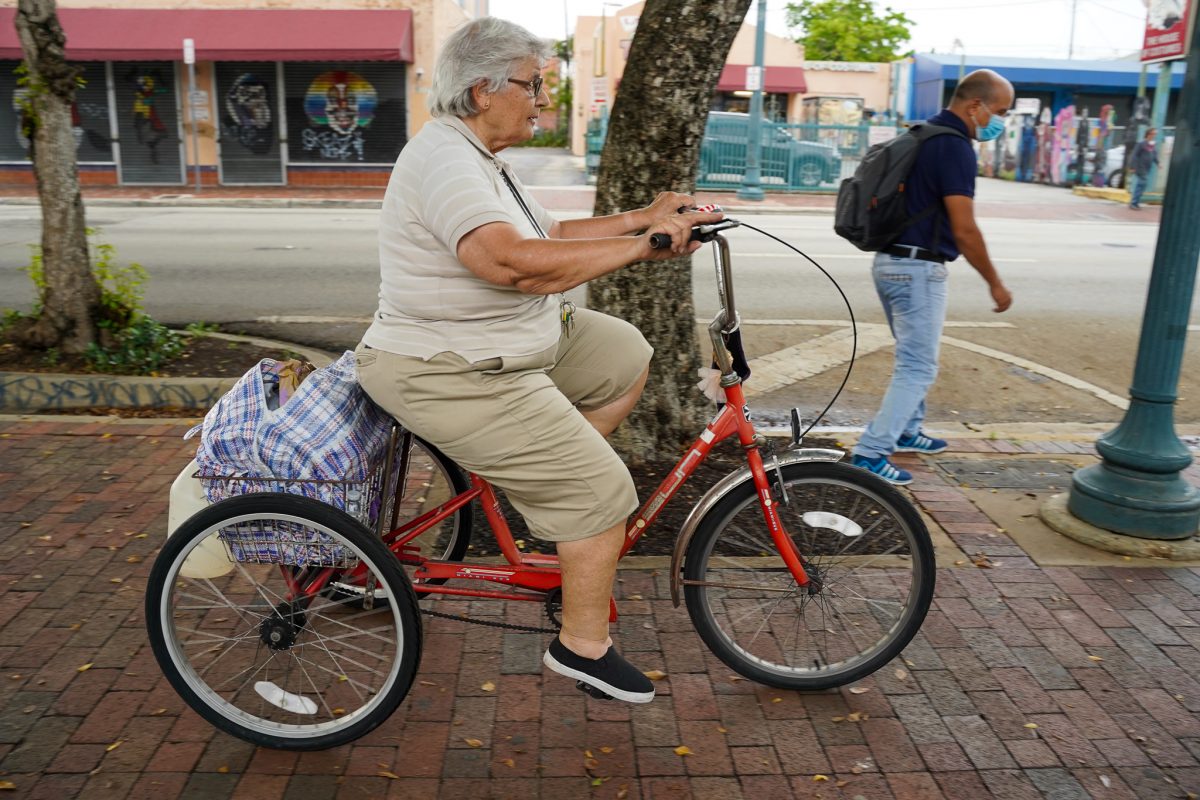 I loved walking 8th Street in Little Havana. Known as “Calle Ocho,” this area teems with Cuban influence. And like everywhere I went in Miami, art was everywhere. I saw several representations of bicycles on the art that hung in the Cubaocho Museum and Performing Arts Center. Cuban senior citizens biked to play dominoes at a special park set aside for the traditional game. A Citibike Miami station adjacent to a Goodwill Store sat in front of an entire wall painted with abstract and artistic portraits.

We stayed in Wynwood for several days and I fell in love with the place. Once known as “El Barrio” by many Puerto Rican immigrants in the 1950s, this neighborhood about five miles west of Miami Beach and the Atlantic Ocean, is an epicenter of street art. About 10 years ago it was a mostly forgotten industrial zone full of graffiti. Then a visionary developer named Tony Goldman created the “Wynwood Walls” to preserve and promote the murals, and the rest is history. In the past five years or so, Wynwood has boomed into a billion-dollar attraction for tourists and real estate investors. Every night of the week, its main drag NW 2nd Ave, fills with people. Artists and art-lovers fill the sidewalks and cruisers of all types fill the street. And everything is painted. Stay tuned for a movie about what it’s like to ride the amazing, multi-colored streets.

With a huge park, perfect beach, and a carfree street, South Beach is a great place to party and people-watch. I saw a fun mix of bike riders that included lots of folks exercising, tourists on rental bikes, locals cruising the strip, and folks just getting to work.

I was told by several people to stay away from this neighborhood. Overtown shares a border with Wynwood, but it does not share any of its boutiques, high-rise condos, new money, or tourists. It does however have a high crime rate and very low average income. Part of its story has to do with the two interstate freeways that cut right through it. The area is mostly government-subsidized housing and boarded-up apartment complexes and businesses. When I met Malik and John (pictured), they warned me to not go any further past their tents on the sidewalk. “You go over to that corner” John warned, “And they might hassle you for your camera.” When I took their photo, they flashed the “305” sign for the Miami area code.

The southernmost point in the continental United States has a bustling bike vibe. With a network of old and narrow streets lined with shops and bars, pedal-power is the most popular way of getting around for tourists and locals alike. There were tons of e-bikes in Key West, likely owing to the relative high wealth and age of its residents. I loved the customizations I saw. Big chopper bars were popular, as were cup holders and bluetooth speakers. Trikes were a big thing in Key West too. One guy carried his dog in the back of one, another women carried her kid in a baby seat that was covered with a large awning to provide shade. Besides the historic Queen Anne/southern architecture and bikey-ness, I didn’t really like Key West that much.

I loved Miami and hope to spend more time there in the future. I also hope these images gave you a little taste of the local bike vibe. Stay tuned for two videos from my trip: A ride with gators and other critters in Everglades National Park, and an introduction to Wynwood Walls.

Great photos, love the colors! It’s nice to see such a large range of normal bikes that the rest of the country rides rather than the (relatively more expensive) bike-shop quality bikes all over Portland.

Yyeeess! I saw one dude with a hi-viz jacket and panniers and was like, “look! A portland-style rider!”

Not only the bikes, the riders too. A comical difference between these pix and the one gracing your Weekend Events Guide.

David,
Many of us have switched to Walmart bikes in Portland. Too much theft and no recourse for better bikes. Did this after the PPB Bike Theft Task Force was axed due to police budget cuts. Hopefully it’s better in North Carolina! 🙂

Jonathan – welcome back home (and away from the CV19 hotspot of FLA). Does Maimi still have Lime Bikes in service? (Or did your camera shoot an image of a feral Lime Bike with rider in the wild?)

Hotspot? If that were the case CNN would be all over it.

I can’t say for sure but I have a very strong hunch that bike was feral.

Geez! Even when on vacation you take the greatest pictures and report on the culture so well Jonathan. Thanks for your stellar contributions to this world!

Dorothy, we’re not in Portland anymore.

So many tricycles, and I love them with the canopy!

Only two helmets in the whole bunch! It’s like suns out, buns out for craniums.