Tomorrow is a big day for bicycling in Portland. At around 11:00 am we’ll be able to roll across the Flanders Crossing Bridge over I-405. It might seem like just another new bridge, but this project has been over two decades in the making.

It was the year 2000 when city planners and downtown advocates began talks to rebuild Burnside into a world-class boulevard that offered Portlanders more than just a bunch of lanes for driving. Those talks led to an $80 million proposal to add streetcar to the street and create a couplet with Couch (one block over). There was a lot to like in the Burnside – Couch Couplet Plan for sustainable city and transportation advocates, but there were no bike lanes. Because everyone knew Portland was Bike City USA, a promise was made to create a bike boulevard on Flanders that would include a new crossing of I-405. In 2005, city council set aside $3.65 million to establish Flanders as the main, east-west bikeway.

Just three years later, Portland almost made good on that promise when former Mayor Sam Adams (then commissioner) hatched a plan to re-use the old Sauvie Island Bridge span at Flanders. Adams had broad community support. “We can’t afford to wait. We should act now,” said Bicycle Transportation Alliance (now The Street Trust) leaders Scott Bricker (now at Travel Oregon) and Catherine Ciarlo (now at PBOT) in an op-ed published by The Oregonian on April 22nd, 2018.

But that project was not meant to be. In the middle of a mayoral race and with fears about funding (using the old span would be more expensive than building a new one) and equity (Adams’ competition, Sho Dozono, said it was unfair to spend money on a new bike bridge downtown when people in east Portland didn’t have sidewalks), the plan was scrapped at the last minute.

13 years later we finally got it done. Along with the bridge, Portlanders will get the bikeway they’ve long deserved and will be able to ride from Waterfront Park to the shopping district of NW 23rd on a low-traffic, (mostly) low-stress “neighborhood greenway”.

There are two rides planned that will end at the opening ceremony:

I’ll be doing a live interview on KGW tomorrow morning at 6:45 am or so. Tune in and/or I’ll see you on the bridge later!

UPDATE: Reader Reza F says the history of a bridge on Flanders goes back even further, to the 1972 Downtown Plan! 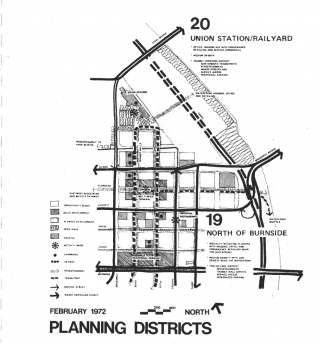 Looks like a great place for Breakfast On a [new] Bridge!

Though I cannot wait until the ODOT/ PBOT bridge standards set out a ‘Breakfast Belvedere’ space so that ‘Timo et al’ can set up safety and securely without obstructing bike traffic, esp. with tasty snacks and coffee. 😉

Every time I look at that lone, dinky little bollard in the middle, I wonder why there aren’t more robust structures to block motor vehicle access. I guarantee we will see burnout marks from car tires all over that bridge before too long.

I’d imagine because one selling point to building it was having an earthquake-proof bridge in case of of emergencies so it needs to be accessible to emergency vehicles in case of natural or manmade disasters? But I agree a second bollard would be nice if it could be done so that a large cargo bike could still make it through two bollards without also having to angle to make the curb cuts.

The answer to that is bollards that can be unlocked by those emergency vehicles. Pretty standard. Never mind the retracting ones all over Europe

This I-405 cap looks very tiny! And there’s no green space!

I actually lol’d. thanks for that!

Cool. Anyone know the planned opening date for the other Portland bike and pedestrian bridge (Sullivan’s crossing)?

I’ve heard anecdotally that it won’t be until next year. PBOT’s website still says that the bridge is going to be moved across the freeway in Spring 2021, and while it might technically still be spring they’d have announced the date of the freeway closure if it was going to happen any time soon.

Unconfirmed is that PBOT is waiting for sign offs from ODOT and UPRR to do the span installation and the bridge will be open to the public early 2022.

That’s a disappointingly long wait. The bridge has just been sitting there for months.

This will make drop off and pick up at the Emerson School and Metropolitan Learning Center SO MUCH BETTER.