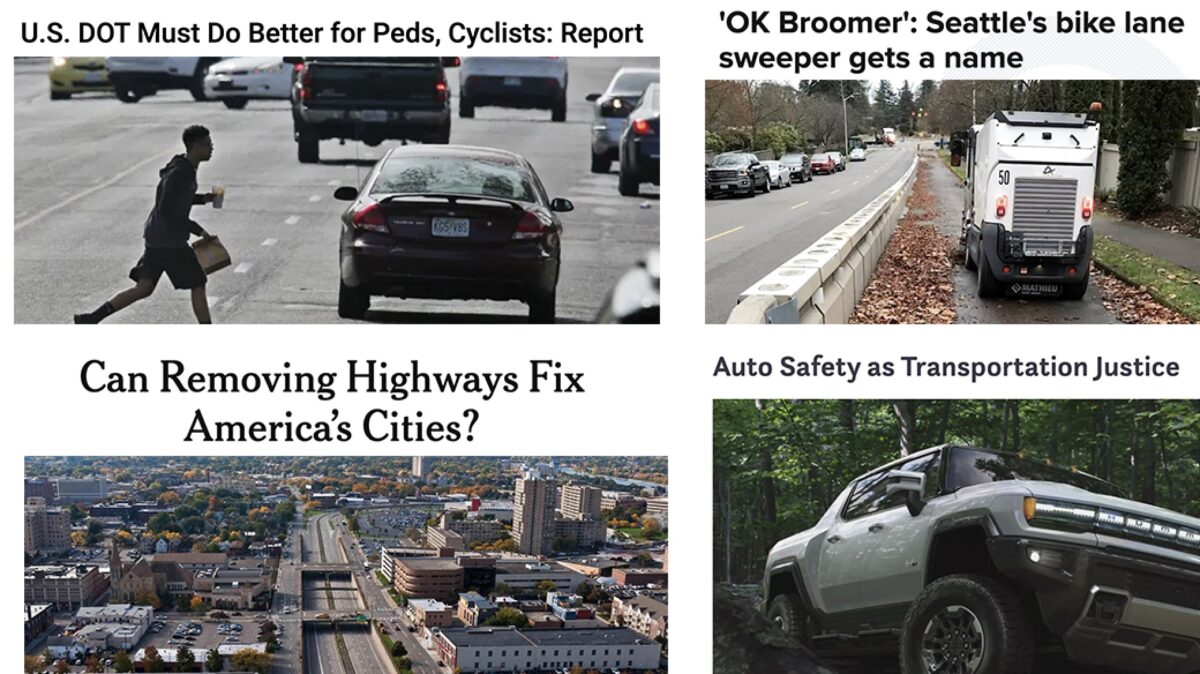 Welcome to the week. Hope you enjoyed the extra-long, extra-sunny weekend!

Freeway removal momentum: The growing nationwide chorus singing the same tune about freeway removal is one of the most hopeful things in America today. With a focus on an inspiring project in Rochester, the NY Times takes a deep dive in how cities across the U.S. are working to reclaim space gobbled up by interstates.

Low-speed streets 101: Child in the City shares a convenient primer on how to design and implement slow streets in urban areas.

What works, what doesn’t: Streetsblog has the details about a new U.S. government report that chides the USDOT for not doing more to track effective traffic safety programs.

PPS sees the Albina Vision: Portland Public Schools has cemented their support for the Albina Vision project by giving the nonprofit first right of refusal on any future development of their sizable headquarters parcel in lower Albina.

Name that sweeper: Seattle’s DOT got a cool mini bike lane sweeper (Portland has one too) and after the votes were tallied from an online poll it will henceforth be named, “OK, Broomer”.

WT-F150: When Ford unleashed their high-profile new electric F150, they could have redesigned the body so that it was much less likely to kill other road users. They chose not too.

Vehicular violence: A woman intentionally drove her SUV at a high speed through a vaccination tent in Tennessee in a fit of rage fueled by her opposition to the shot.

Traffic enforcement narrative: The Governors Highway Safety Association, the group that once pushed the “distracted pedestrian” narrative is now sounding the alarm that the “Defund police” movement is to blame for a steep drop in traffic citations (and resulting fatal crashes) nationwide.

BP Forums: Don’t miss the latest posts in our Forums.

I wish the NY Times wouldn’t use bicycles to push vanity and rampant consumerism.

No matter what your politics, it is plain that the NYT has become the news source who’s purpose is to disseminate and reinforce the official narrative of the establishment. It’s secondary purpose is to keep its “comfortable class” readers feeling good about themselves and their prospects in the world. The term “Newspaper of Record” is out of date and self important. A more accurate one would be ” Pravda on Hudson”.

ok bikeninja.. FWIW I used that term because of the size/reach of NYT (the outlet most commonly referred as such BTW) more than any desire to make a value judgment about their work.

Sorry Jonathan,
I wasn’t intending to argue with your use of newspaper of record as I realize it is a useful identifier in reporting what they write. I don’t have any problems with the inclusion of this story or its place in the monday roundup. I was more trying to point out to Paul ( from my point of view) why it is par for the course for the NYT to push vanity and rampant consumerism.

I’d love some transparency regarding the paid product placements /affiliate links. They look tacked on after the fact by some intern. Some may not have paid but quite a few are running click tracking.

Regardless, it’s nice to see what people are wearing and riding. It makes me miss Bill Cunningham’s street fashion pieces.

There are a few where the ads match the picture, but more often than not, the ads are for a different product than anything in the picture, which I find… odd. They even advertise an ankle strap in a picture where the cyclist isn’t using one. They must have had a list of things to advertise, and a series of pictures, then just shoe-horned the ads into whatever picture seemed closest.

Meanwhile, I’m bemused that the very first photo has a very recognizable product in it, but no ad. I guess Brett over at Efficient Velo Tools didn’t pay to put in an ad for his very handy Safe Zone Helmet Mirror, but I’ll mention it here as a satisfied user.

Curious how @nytimes goofed and lists Interstate 5 in Portland as a proposed removal plan. Maybe they read ODOT’s Rose Quarter Improvement Project .org website and were swept away by the hype?

“Oh look, America’s newspaper of record just did a BikePortland-esque” – LOL 🙂 looks like they are hoping to keep their record.

Well what a PITA from the NYT. I’m a subscriber, and I still couldn’t avoid their ads.

I hope “OK Broomer” lasts at least as long as the name makes sense to people.