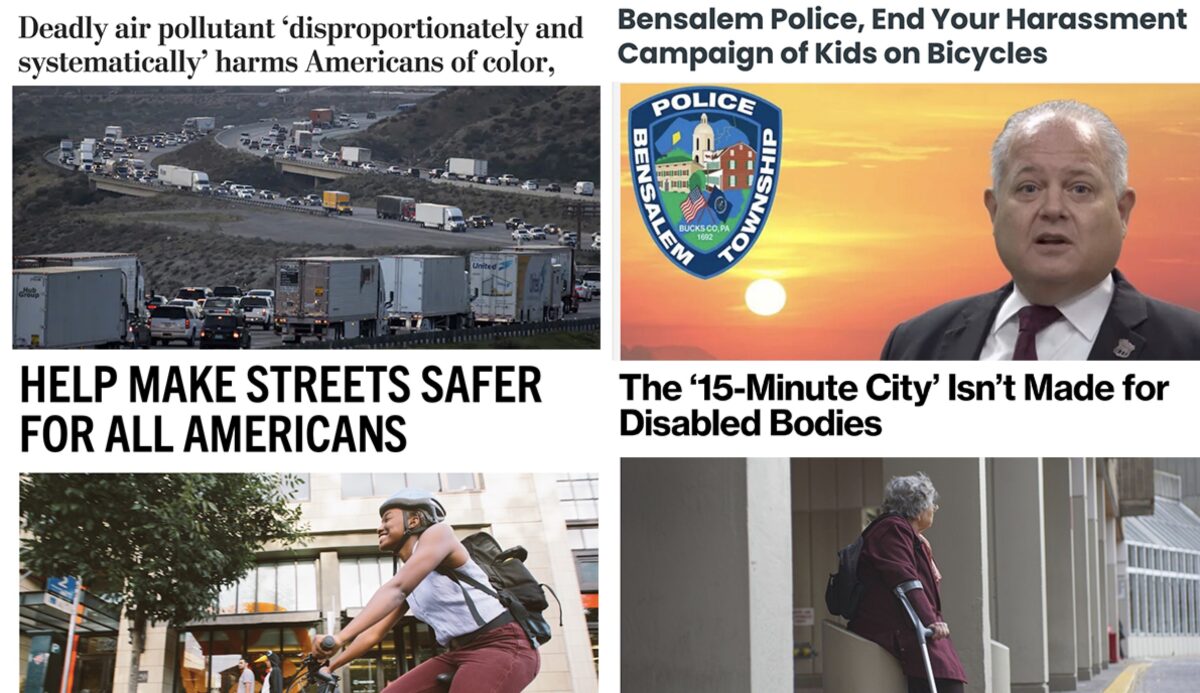 Here are the most noteworthy items BikePortland readers and editors came across in the past seven days.

15 minutes for whomst?: Disability rights activist Anna Zivarts says any commitment to “15 minute cities” must come with full understanding that many people who rely on paratransit or other services cannot afford such luxuries.

Rider harassment campaign: After a police department in Philadelphia asked for the public’s help to crackdown on bicycle riders “causing traffic issues,” a local advocacy group called them out for targeting kids and wheelie riders.

Scrapers go mainstream: In 2010 we said the world needs more scraper bikes. That’s why I was so happy to see the news that Berkeley, California-based Original Scraper Bike Team has launched an after school program for fourth to seventh graders. Let’s do this Portland!

Racist emissions: New research hardens the case that vehicle emissions and other car and truck-borne pollutants have a much greater negative impact on Black, Indigenous and people of color. Oregon Senator Jeff Merkley, chair of a key Senate environmental committee, tweeted this article and said, “I am committed to tackling this issue head-on.”

Cop lied about traffic stop: University of Oregon has sued a former campus cop who allegedly lied about an altercation with a bicycle rider that appears to have been a pretext/profiling traffic stop.

The PBA Way: The Portland Business Alliance, a staunch critic of many progressive cycling plans, was found to have violated lobbying rules 25 times, according to a City of Portland audit.

Feds don’t be freds: There’s a national call-to-action to encourage the Federal Highway Administration to “reframe and revise” the all-powerful Manual on Uniform Traffic Control Devices as it’s going through a major update.

“We Should All Be More Afraid of Driving”: This article in The Atlantic is a personal and poignant look at the mental impacts of traffic violence where the author comes to the conclusion that much of our road carnage is simply an “accident” and there’s nothing we can do about it.

Video of the Week: An informative primer to “How the Auto Industry Hijacked the American Dream”…

The Carjack video is awesome! Everyone should do themselves a favor and watch it.

The PBA Way: When I was advocating for East Portland 2009-15, I worked with many community groups and neighborhood associations who regularly violated the “8 hours over 3 months” rule – up until now I didn’t even know it existed. IMO, it’s a dumb rule given Portland’s form of government and obviously unworkable.

In “We Should All Be More Afraid of Driving”, the writer – a journalist- consistently uses “accident” instead of crash. Even when describing his own crash where someone cut him off and he evaded contact by going into oncoming traffic – clearly someone at fault here.
Some would say an inappropriate response, but with microseconds to react, we can’t think through the best options.
Words really matter, and for this understanding I credit Jonathan.

I would submit that it is helpful for drivers to consider crash scenarios and think ahead about how you should react. I do this all the time – call it paranoia – but I hope that I would have created some ‘mental memory’ such that an instinctive reaction tends to be more appropriate. In the author’s case, that would be to hold the centerline as sacrosanct. Of course, all situations are unique but I do think we can train ourselves to a small degree for better reactions. It may save a life, or a whole lotta hurt.

Thanks Bill. Yes, language is important, and any vehicle operator who has not foreseen the possibility of violent traffic encounters and is not working to avoid them cannot be said to be taking care. They are being careless in the true sense of the word.

Root causes of traffic violence go beyond individual choices. Our primary means of personal transportation has the potential to leave any nearby person crushed, pinned, bleeding, dead. A person doesn’t need to be ‘at fault’ to suffer. They might be just taking a break on the sidewalk outside their work and our need for motorized transport knocks them dead.

When you look at the video of the shooting of Eliborio Rodrigues Jr., and how respectful he was. It is clear that he is used to being harassed by the Eugene police dept. Especially with what is now known from the the previous altercation in which the cop was fired for fabricating evidence and using force illegally, I have a difficult time believing that his bodycam fell to the ground and somehow turned itself off… Why didn’t the guy simply call his sergeant? https://youtu.be/vKsiU6e33HE

It’s not Eugene PD, Wake – it’s U of O PD. Yes, the U of O (and Portland State U, and OSU, and other public universities and colleges) employ their own police dep’ts that have sworn officers who carry firearms and exercise the power of life and death over everyone else.

I’ve spent a lot of my life on university and college campuses, and in my experience, many of the men and women who choose to work in these environments do so for the wrong reason: so they can wield absolute power over others. Troy Phillips sounds like exactly that kind of person. He should never have been elevated to such a position.

Hey Fred, he was killed by Eugene Police Dept, but I agree with you regarding some campus officers.

For whatever reason, the above link is the wrong video. Here is the correct one. https://youtu.be/MtQzBdnYUIY

The Eugene police killing of someone recycling while Hispanic needs much more investigation. Why wasn’t there any deescalation? Why was he stopped for walking on the side of the road on a quiet dead-end street where numerous other people walk all the time? Was the officer aware of the previous complaint/lawsuit with the UO police? Did the ruggedized, drop resistant camera actually break? Did the manufacturer examine the camera to determine why? Why wasn’t the cruiser camera on? Was there any fingerprint evidence on the camera or taser? The state AG and/or FBI needs to get involved. The local investigation lacked credibility.