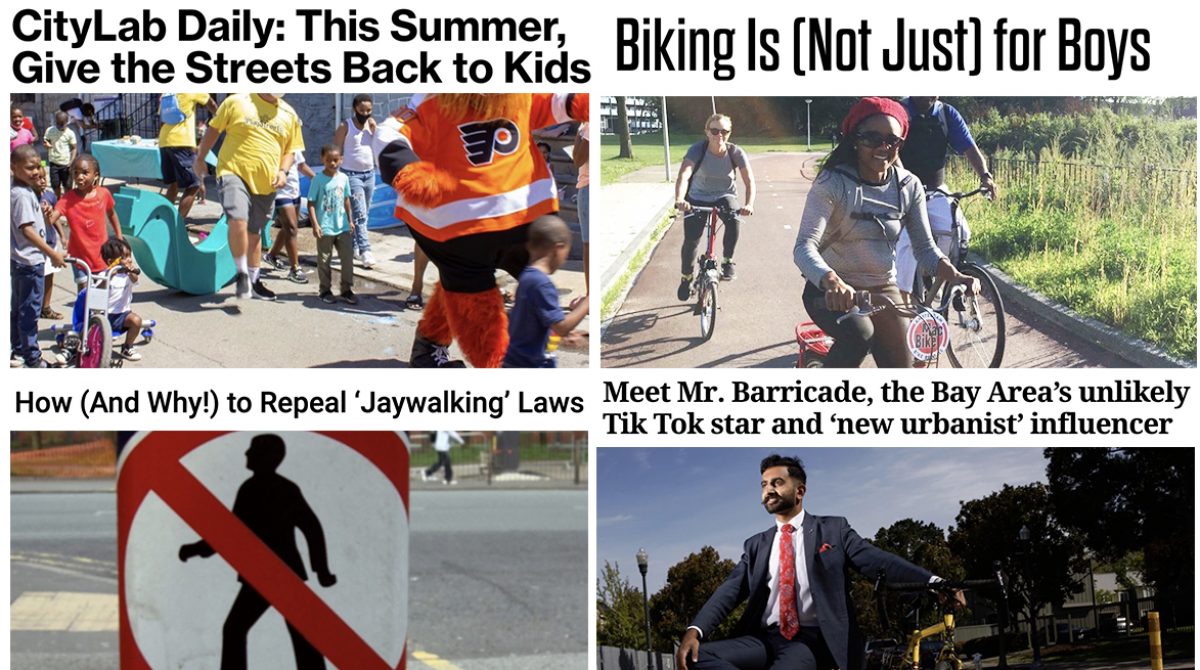 Welcome to what is going to be another stellar week!

End the fantasy: The New Republic says cities should stop fawning over autonomous cars and invest in the stuff that is actually real and ready and working today like buses, bike lanes and sidewalks.

Let the kids play in the streets: Closed playgrounds and no more recess during the pandemic have hurts kids’ hearts and minds, so we need more policies like “Playdays on the parkways“.

Food by bike: Not to be outdone by the Community Cycling Center in Portland, Seattle’s Cascade Bicycle Club has delivered 240,000 pounds of food by bike in a pandemic-inspired program they want to help replicate nationwide.

Secretary Pete gets it: In a new and relatively juicy interview from The Verge, US DOT Secretary Pete Buttigieg once again hits many of the right notes when it comes to the future of transportation in America.

5-5-5: City Observatory has created a handy mnemonic device for understanding the CRC 2.0 project. Despite DOT propaganda that it’s just a bridge replacement, it’s actually a $5 billion megaproject that will widen five miles of freeways that will come with $5 in tolls for users.

Zooming while driving: Before you wag a finger at this Ohio state senator who got caught driving while in an online meeting, consider that the same thing happened at a City of Portland meeting last week (thankfully the staffer was reprimanded).

The wonderful Mr. Barricade: Vignesh Swaminathan is a star on Tik Tok where fans gobble up his engaging videos on everything from why protected intersections are so great to why redlining is so bad.

‘Jaywalking’ should not be a crime: Streetsblog USA has the latest on the growing national movement to decriminalize crossing laws — laws that were created by the automobile lobby and uphold a driving-centered street system that harms people of color and other groups commonly hassled by police.

Listen to Peatonito: Mexico City’s “urbanist legend” and masked defender of safe streets “Peatonito” (“little pedestrian” in Spanish), is enrolled in graduate school at UCLA where he could help foment a pedestrian revolution.

Throw the book away: Venerable journalist, author and rabble-rouser Angie Schmitt lays out a very strong case for why serious reform of the federal MUTCD is so badly needed.

Famed architect killed while biking: Noted Chicago architect Helmut Jahn died in a collision with two drivers while he biked on a rural road 20 miles outside of Chicago.

I don’t have any particular opinion about jaywalking laws. I see no issue with crossing a street like Clinton mid-block, but I do see problems with crossing Powell, so maybe a full repeal is not the best answer. All it would take for me to support a specific proposal would be to show how it would improve outcomes. (Specifically, in this case, will fewer people be hurt if they can cross anywhere? Or would an increase in convenience be worth a decrease in safety?)

It doesn’t seem practical to repeal every law the police might use to hassle a person. Better to change policing policy to eliminate the use of laws as a pretext for something else, especially if there is no data to support that pretext stops improve outcomes.

Finally, in software development, an antipattern is a common but bad approach to solving a problem. Arguing against a law because of the imputed intent of supporters a century ago is an antipattern. It doesn’t matter what they thought, and it undermines stronger arguments for change by making your motives look suspect. All that matters is whether any proposal for change would improve things in today’s context.

PS I think referring to people as “tech bros” is demeaning and reductive.

I think referring to people as “tech bros” is demeaning and reductive.

Yes I agree. Sorry for that. I deleted it and won’t use it anymore.

Where is jaywalking enforced?

I hear gunfire so often I could never keep track of it — a couple weeks ago, I heard three bursts from an automatic weapon. From what I can tell, property crime, street racing, and a whole slew of very dangerous/damaging things aren’t enforced, so I’m wondering how resources are being found to accomplish nothing.

In any case, why encourage jaywalking if the consistent message here is that too many people are getting hit? There’s no way that having people cross at less predictable/visible locations is not going to result in more tragedies.

It depends on how you cross a street, how you were raised to do so, and if you value your life or not. In Europe, residents often cross midblock with the flow of traffic, especially in Italy and any country with very little signalization. Roundabouts and rotaries work much the same way. I’ve been nearly hit far more often at a signalized intersection than midblock, as motorists everywhere are only looking for other cars (and presumably other drivers), not for pedestrians and cyclists. I cross where and when it is safe, not necessarily where and when it is legal, but then that’s an advantage of white privilege, isn’t it?

1) Jaywalking is a term that does not exist in Oregon law.

2) It’s entirely legal for people to cross midblock if they are a modest distance from a designated pedestrian crossing.

And from a personal perspective, every crosswalk near my house on Hawthorne is a mid-block crosswalk on on one side or on both sides. The near total unwillingness of most drivers to stop at these intersections illustrates how many drivers view pedestrians with legal right of way* as nothing more than dirty jaywalkers. Perhaps this general disdain for the rights of pedestrians might of something to do with the CARnage caused by drivers in our city.

*Many, if not most, people walking do cautiously indicate their desire to cross in a legal manner but are still ignored by speeding cage drivers.

Jaywalking laws are enforced in Seattle. At least they were – heavily – when I lived there.

I second this, the only time I’ve ever been stopped for jaywalking was in Seattle while on vacation.

From the Zoom call article: “there’s nothing inherently dangerous about calling from a vehicle, as long as you’re not actually driving and fiddling with your phone the entire time.” Um, sorry, nope. That’s not true.

That Bloomberg article on the MUTCD is really good. Share that link widely.