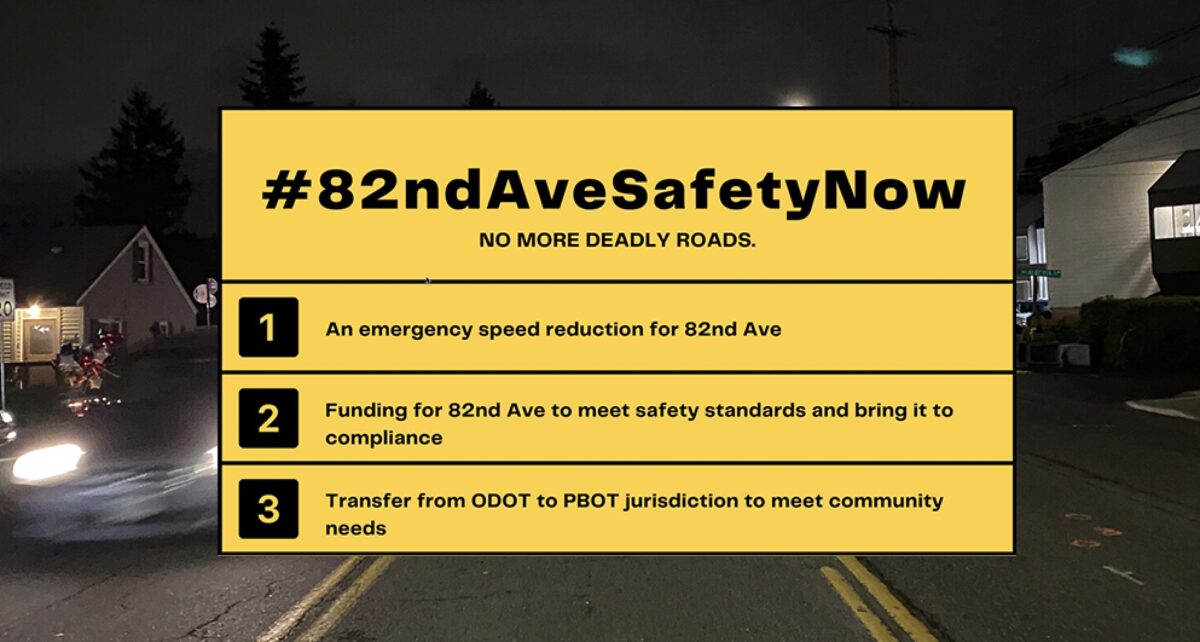 After two people were killed in a two week span at the same intersection of Northeast 82nd Avenue last month, nonprofit Oregon Walks organized a high profile rally Friday. With a broad coalition of support that includes State Representative (and former east Portland activist) Khanh Pham, State Senator Michael Dembrow, PBOT Commissioner Jo Ann Hardesty, and other elected officials and community leaders, a list of demands had been circulated for the past week or so.

One of those demands was met by ODOT just a few hours before the rally was set to start.

In a statement released today just after noon, ODOT announced they will reduce the speed limit on 82nd Avenue from 35 to 30 mph for a nine-mile stretch between NE Killingsworth and SE Clatsop. “Portland Police will enforce the new speed limit as soon as the signs are fabricated and installed,” ODOT said.

While the announcement was a surprise, the speed reduction idea was far from it. The City of Portland filed a formal request for this reduction nearly one year ago and ODOT had failed to act until just before the rally.

In addition to the speed limit change, ODOT says they’ll ask the Oregon Transportation Commission at their meeting May 13th for $3.35 million in safety upgrades on 82nd Avenue (and $10 million total for pedestrian safety infrastructure statewide):

ODOT says the projects will be completed by fall of this year.

For more on today’s announcement see the coverage in The Oregonian.

Stay tuned for a recap of today’s rally on Monday.

I really wish that ODOT didn’t wait for a couple of high-profile deaths and public outrage to spur them to do the correct thing. I sure wish they would install speed cameras instead of flashing speed notification signs. I also wish that police and the courts didn’t interpret a 30 MPH speed limit to mean that you can do 39 MPH without any fear of enforcement.

Griping aside. Woo hoo! This is good news. 82nd needs a complete design overhaul, not a stop gap. But this is a definite step in the right direction.

I hear you @Taylor Getz. Speed reductions are not sufficient. But here’s why I believe they are necessary. Many engineering changes conducive to lower actual speed are only possible where the design speed (typically 5 over posted) is slower. It is a chicken-and-egg problem that, unless solved by community outpouring/ outrage, assures inaction. I hope PBOT and ODOT will put out speed tubes to measure speeds before and after the -5 change. I predict we’ll see a reduction of about 2-3MPH, mostly coming at the top end (where it matters most). Because most ppl get uncomfortable when they’re driving more than 10 over. There are some studies that embolden people to disparage a “signs alone” approach and that approach is never preferred (see rally demands #s 2 & 3 above). OTOH PBOT went 25 to 20 on 70% of its network a few years ago and the study results (written up on BP) did show reduced top end speeding. Here’s hoping for 82nd and beyond.

I understand the chicken-egg problem you describe but frankly I have little faith that changing the speed limit will help. Anecdotally, I haven’t seem any change in auto speeds on neighborhood streets that are now 20mph (despite what the study you site says). Almost daily I get passed by someone exceeding the speed limit (I have a bike computer so know I’m riding at about 18-20mph) even where speed bumps are present (like today on SE Clinton). AND, I even get harassed by drivers if I’m not yielding to them as they try to pass me at 25-40mph (on narrow, posted 20 mph, neighborhood streets). I’m frustrated and saddened by the quantity of drivers who choose to speed and/or drive recklessly around others. I don’t expect it to change until we have a bigger societal shift. Just look at all of the car advertisements that glorify going fast in urban and rural settings. Anyway, back to topic: I agree it must be more than speed limit reductions!

I have similar experiences when biking on greenways. Even if I’m going downhill and doing 20+, people in cars will accelerate dangerously and pass in very tight quarters rather than wait.

In Bend, many of our busiest streets (e.g. Franlin, Greenwood, Penn, etc etc) have had speed limits lowered by 10 mph the past two years. The effect has been absolutely zero, I mean zero, on the speed of cars. Generally speaking 35 in a 20 or 25, 45 in a 35 are the average speeds, with faster cars frequent. I walk all these roads, and I have never, I mean never, seen cars being stopped for speeding. Bend, on average, has two traffic enforcement officers on duty during daylight hours in a city of 100,000. You can mock traffic enforcement all you want, but drivers know if they are being watched (or not).

LOL! How will the Portland Police enforce the new speed limit? All the traffic officers were eliminated due to police budget cuts. Just like the Bike Theft Task Force. 🙁

You make it sound like the officers lost their jobs. I know that the department has staffing challenges, but I have seen police motorcycles on the street since the story about traffic officers came out.

Well – per PPB traffic enforcement officers having been defunded…this is a ‘win win’ for the PPB: they cut traffic safety enforcement (so they could focus on their “core” responsibilities?!) and then get more grant funds to do overtime work doing what they just gave up doing.

When ODOT has a “safety project”, they mean improved safety for car drivers, by repaving the street, eliminating potholes, and re-marking the stripes. Probably not the meaning you are thinking of…

Can we please just have more speed cameras with an income based ticketing structure?! It seems like less work than continually adjusting signage that relies on drivers to self police their own speed.

Give people fines for speeding. And make it hurt!

Oddly (unless I missed it) the linked Oregonian article never mentions ODOT. The headlines says, “Oregon”. The article mentions the “Oregon Transportation Commission”, “transportation officials”, “the state agency”, and the “state” but never ODOT. The article overall seems good.

From the traffic, I never would have guessed the speed limit in E82nd was only 35mph – I expect that the design speed when it was built must have been higher. I can’t really see anyone expecting a 5 mph change in the speed limit affecting motorists’ behavior.