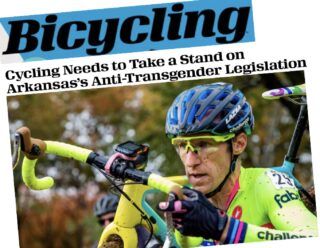 Anti-transgender legislation proposed in many states across the country has spurred local cycling leaders to step up, speak out, and fight back.

Arkansas is one of the states leading the charge. It’s also slated to host the 2022 UCI Cyclocross World Championships. In addition to this high-profile event that’s likely to draw many racers from the Portland region, Arkansas has become a cycling mecca in recent years. That’s because it’s home to Walmart, whose young heirs’ love of cycling has led to massive investments to attract bike companies and riders seeking fun trails.

But anti-trans legislation is hurting that polished brand. It’s also hurting athletes who are stuck in the middle of a Republican culture war.

And now some major Portland bike advocates have put Arkansas on notice. 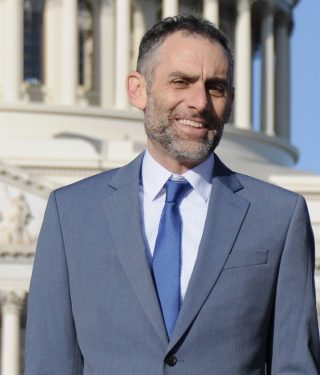 Chris DiStefano has worked in marketing and public affairs roles in the bike industry for over three decades with stints at Shimano America, Rapha, Chrome and others. He’s met with Obama Administration officials and attended several National Bike Summits to lobby congress on a variety of issues. He’s also the parent of a 20-year-old transgender woman.

DiStefano took to Instagram last week to urge the UCI (cycling international governing body), USA Cycling, and all bike-related businesses and events based in Arkansas to, “be at the front of the fight against discrimination.”

“A few dollars here and there as the standard ‘bikewash’ has historically been all it takes for the bike community to be pacified and if that’s the plan in NW Arkansas then we have to finally take a stand,” DiStefano wrote. “If the huge money behind the great trails and bike infrastructure cannot also stand in opposition to hatred and discrimination then I guess they can keep their trails for themselves.”

DiStefano says in the past few days other high-profile industry executives and athletes with transgender kids or relatives have reached out in solidarity. His activism has also been boosted by cycling publication VeloNews.

Portlander Molly Cameron, an elite-level transgender athlete who’s faced the industry head-on about this issue in the past, has also spoken out about the anti-trans legislation. In an article published by Bicycling April 2nd, she said, “I don’t feel bad for the businesses. I ache for the young people who will be affected by these laws, who won’t be able to access critical healthcare or know the joy of playing sports and being welcome and accepted into an athletic community.”

So far, USA Cycling CEO Rob DeMartini has downplayed calls for an Arkansas boycott and said national team athletes would not be harmed by the laws.

As of Thursday, DiStefano wasn’t having it. “It’s going to take a lot more than an apology in response to your weak, unprincipled and privileged statements,” he posted to Instagram. “Policy > podiums”.

This is a really important issue nationally, and it’s been heartbreaking to see state governments target trans youth in particular. These are some of our most vulnerable kids. Cheers to all the folks, trans and cis, taking on this issue.

I grew up in Bentonville, AR and I have a trans nephew living there today. Growing up gay was rough but we didn’t even know trans people existed until my senior year in 2010. The LGBTQ community is not safe anywhere in Arkansas. After the elections my nephew’s life was threatened and the new legislation had only added fuel to the bigots fire.

Chris DiStefano, Molly Cameron and others are on the right side of history.

USA Cycling CEO Rob DeMartini, and the anti-trans bigots who are likely to chime in on the comments section are on the wrong side of history.

If you are not fighting against racism, homophobia, and transphobia, then you are showing acceptance for the status quo.

Vote Up5Vote Down  Reply
« Job: Bike Mechanic – Bike Works Seattle
The bike lane in the middle of a Portland freeway »