An exciting new project in Central Oregon would connect the popular vacation destination of Sunriver to Bend with a carfree path. 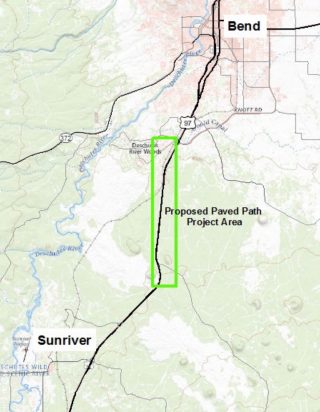 Today the Oregon Department of Transportation opened a public comment period and online open house for the I-97 Multiuse Path (Bend to Lava Butte) project. The proposed path would be about six miles long. It would start south of Bend, wind through high desert forests and lava flows adjacent to Highway 97 and connect to an existing path at the Lava Lands Visitor Center. At the visitor center, riders could connect to another path that goes directly to Sunriver.

This would be a huge deal because there’s currently no safe, easy-to-ride, paved route between Bend and Sunriver. The riding around here is also really interesting and fun. There are dynamic rivers, huge lava flows, forests, mountains, and more! I’ve biked in the area a lot and it would be a game-changer if folks staying in Sunriver could get to Bend without ever riding on a highway. The path would also create more connections to the hundreds of miles of unpaved/gravel roads in this area.

And of course it’s worth keeping in mind that Sunriver is a major destination for Portlanders and already boasts the best bicycle network in North America. 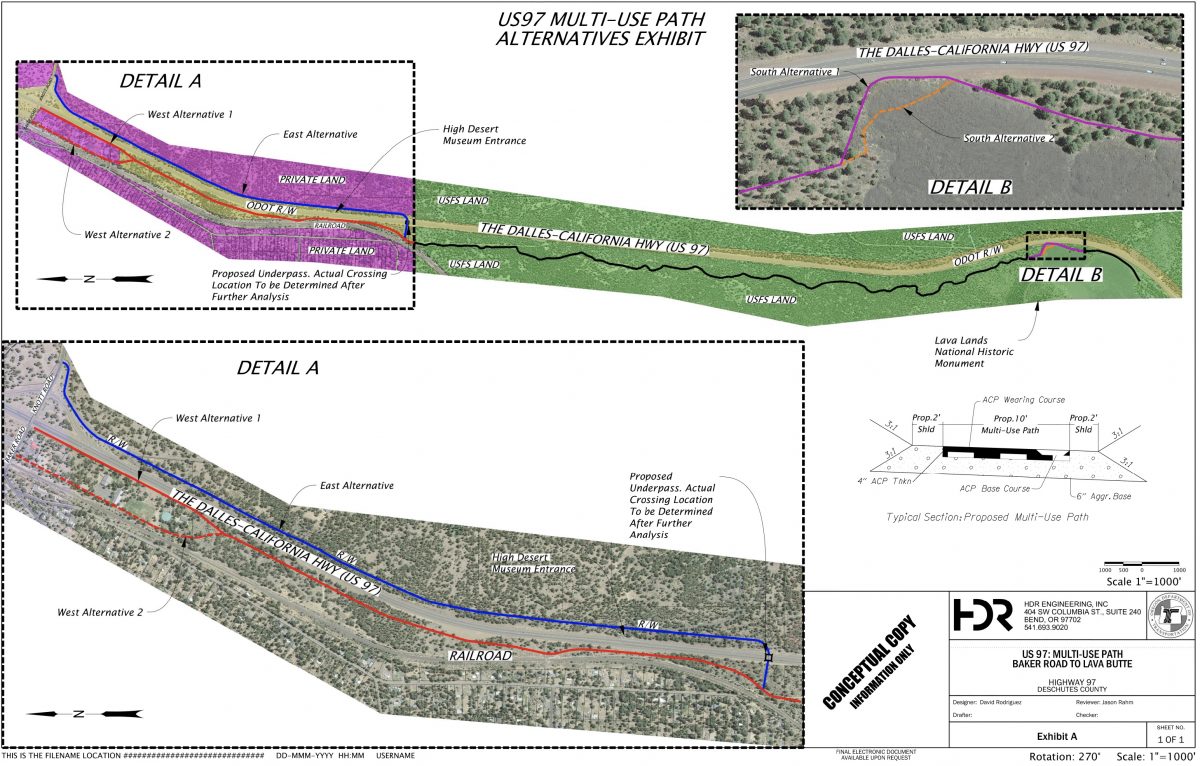 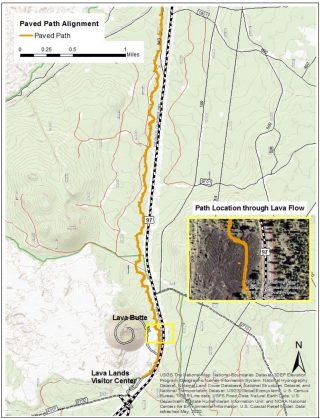 ODOT is still in planning stages for the path and wants to get your feedback for which alignment to build.

An initial analysis revealed that a path on the east side of I-97 received the highest score. This alignment would provide direct access to the High Desert Museum and would come with a tunnel under I-97 at the boundary of the US Forest Service and City of Bend land. The path would continue on a winding route on an existing unpaved forest road to Lava Lands Visitor Center with the final section taking riders directly through a lava flow in order to “create a unique experience for trail users.” (ODOT completed a 5.5-mile path between Sunriver and Lava Lands Visitor Center in 2014.)

The path would be 10-feet wide with a two-foot gravel shoulder on each side.

This project is funded with a $5.8 million Federal Lands Access Program grant and is expected to begin construction in 2023. Check out the online open house to learn more and share feedback. The open house will accept comments through April 30th.

I think ODOT needs to get a Ridewithgps or Strava subscription and turn on some heatmaps..
seems to me there are plenty of routes out there already, further away from 97 (pave some of those).. no one wants to ride close to a highway..

Interesting perspective. You might want to consider that not everyone rides like you do and that perhaps ODOT wants to create a path that is the flattest, most direct route possible. Budget is likely also an issue.

There’s a reason 97 is in this location. Because it’s direct and flat. If you consider that this path is for people waking, in mobility devices, families, and so on, you’ll see there’s value in the route.

Cue the complaints. Evidence that ODOT is considering the needs of other transportation modes.

I see people riding ON highways, so there must be some interest for a project like this. I think it has great potential.

Correct, there are current routes, but these are either single track MTB/trail running routes or high traffic hiking paths along or towards the Deschutes river. An additional, relatively flat and straightforward paved path would add a low barrier bicycle connection between the two communities without ‘disrupting’ the current trail system and taking away of the other ways to get around in that area.

Another Engineer
Reply to  Glenn F

Somewhat unrelated but ODOT has access to Strava data through Strava Metro. The data is helpful but the subset of cyclists who use it isn’t representative of all cyclists.

eawriste
Reply to  Another Engineer

Exactly. I’m willing to trek through a hikabike section few of my friends would rarely even consider.

Chris I
Reply to  Glenn F

So instead of building a new path that all users can ride on, you’d rather have them pave one of the existing (and fantastic) gravel routes?

IMO, I’d prefer to see this parallel the railroad line, since that does take it away from the highway. The issue is probably construction through the lava flows.

Does Sunriver still prohibit bikes on the roads? The paths are nice for families with children and walkers but if this doesn’t fit your situation, riding on the 20 MPH roads would be nice.

The idea that bike paths are there to keep bikes out of the way of drivers is counter to an inclusive world where people share the road as humans not 6 ton vehicles.

Chris I
Reply to  Tim

I think they do, but I’ve never been pulled over on early-morning “go fast” rides.

Some perspective from a former Bendite.

Hwy 97 is about as sketchy as it gets in this state for bike-riding, even though locals are used to seeing cyclists. Freeway speeds and cinder in the bike lanes nearly year-round. It’s as bad as some sections of 101 and the pass highways (26, 22, and 20).

I would be surprised if there was ever a cyclist fatality between Bend and Sunriver because its rarely ridden. If you see anything on the strava heat map there’s a good chance it’s just a GPS unit that didn’t get turned off. I agree with Gerben and Jonathan – I’m not aware of a current N-S paved bike route through this corridor, and it would be a good connection serving both transportation and recreation cyclists.

You are spot on. For work I drive back & forth between Bend/SR several times a week & for many years now. Rarely do I see a cyclist. In fact I can’t remember the last time I saw one. Just drove to Lapine & back to Bend today & I saw a couple of cyclists. They were in their Subaru with bikes on the back.

Sounds amazing. How many miles would this be?

It’s about six miles long Donna. 4 miles in the USFS land south of Lava Lands, then another 2 miles to Bend.

Sunriver prohibits Skateboards, Scooters, Rollerskates, and e-bikes on their paths.
The state should not be using taxpayer money for this project unless Sunriver is prepared to allow a wider range of users on their network of paths.

eBikes are fine, in fact you can rent them there.

That must be relatively new. I avoid the place because they don’t want ‘my kind’

That road to the west of Deschuted isn’t paved?

It is only paved to the turn off to Benham Falls.

That path along 97 looks a bit twisty, but not nearly as twisty as riding the Deschutes River Trail from Bend to Sunriver…

The ‘scalies’ on that cover image had me scared this was going to be like 5′ wide….and culverts 5′ tall. Some poor ODOT/HDR intern missed a factor or something…

Woohoo! Yet another great ODOT project. They’re really pulling their own weight with these off-road trails like this and the HCRH.

It would be super cool if one got built along Highway 26 from Portland to Madras too. Think of being able to easily bike all the way from Portland to Bend along either low-traffic roads or off-street paths!

Agreed _. ODOT’s mandate priority should be projects similar to this, filling relatively short gaps between relatively ridable/walkable areas. The I5/99 corridor, with the highest population in the state, would be the most effective route choice to increase the number of people, but 26 would be amazing as well.

I-5 would be good for sure; nice and flat and peaceful through the various farms and vineyards. One along the Highway 35 corridor would be fun too. I’m just imagining a low-stress paved loop from Troutdale to Hood River to Government Camp and back to Troutdale. What an amazing ride that would be.

They grow them big down in Bend, that woman looks like she’ll hit her head on the ceiling!

Chris I
Reply to  AB

What is this? A path for ants?!

This explains all of the work going on along 97. Clearing out alot of trees.

Huh? They haven’t figured out the alignment yet. The tree removal must be for some other project.