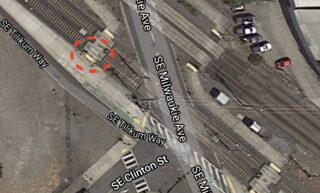 The Multnomah County Sheriff’s Department says there was a fatal collision between a TriMet MAX train operator and a person on foot Wednesday around 7:00 pm.

According to Multnomah County Sheriff’s Office Communications Director Chris Liedle, the case is being treated as a suicide. “The adult male stepped in front of the train. The man did not survive. The individual’s name is being withheld until next of kin is notified. He was in his 60s,” Liedle shared with BikePortland today.

The specific location of the collision was the southernmost tracks adjacent to the pedestrian crossing west of the SE Milwaukie Ave/SE Clinton intersection (see map at right). Liedle says the man approached the swing gates next to the bike path and sidewalk off SE Tilikum Way. This is a well-known location for many bike riders since this is a popular bikeway between the Eastbank Esplanade and the Hosford Abernethy neighborhood.

Liedle says all railroad warning systems were functioning correctly. He said the person opened the gates, walked onto the tracks and turned into the direction of an eastbound MAX trail which was traveling east toward the Clinton St/SE 12th Ave MAX station.

These gates were the focus of intense scrutiny when they were installed in 2015. Advocates — including the Portland Bicycle Advisory Committee — opposed them because of concerns with accessibility. The gates are difficult to use for people on cargo bikes, pulling trailers, and people using personal mobility devices.

What ever the conclusion ends up being, this is tragic.

Sadness…for the family of the dead man AND the train operator (and any passengers / witnesses).

The research reports: It will take a long time for the train operator to process this tragic event…even one that is a ‘death by train’ event, as in not their fault, if they can ever successfully do – PTSD, etc.

That is a stunning photograph Betsy Reese took.

This intersection is vying for the title of worst in the Portland area (with strong competition from 6th/Broadway or Scholls Ferry/Beaverton-Hillsdale). Confusing and frustrating regardless of whether you’re biking, walking, driving, or taking public transit. They really should’ve grade-separated the tracks when redesigning it to accommodate the Orange Line a few years ago.

And my condolences to the person’s family, the MAX operator and passengers, and bystanders. We really really need a better and de-stigmatized mental health system in the US to prevent tragedies like this.

Metro, the City, and Trimet should have worked with Union Pacific to bury the rails in a trench through this area when the Orange line was built. It would have been major work for all parties, and would have involved lowering the rail line by a few feet, and building up the surrounding streets to achieve proper clearances. The end result would have been significantly safer and more efficient for everyone.

Rode by this interesection over the weekend and was thinking about how tragic this was, for the deceased but also for the driver of the MAX train. Read an article awhile ago about traumatic – and, sadly, how common – this experience is for train drivers. Almost half of America’s engineers have operated a train that killed someone on the tracks, many of them suicide deaths, and drivers report being haunted at the prospect of becoming an unwilling participant in the killing of another person.

My heart goes out to the families of both people involved and I wish them healing.