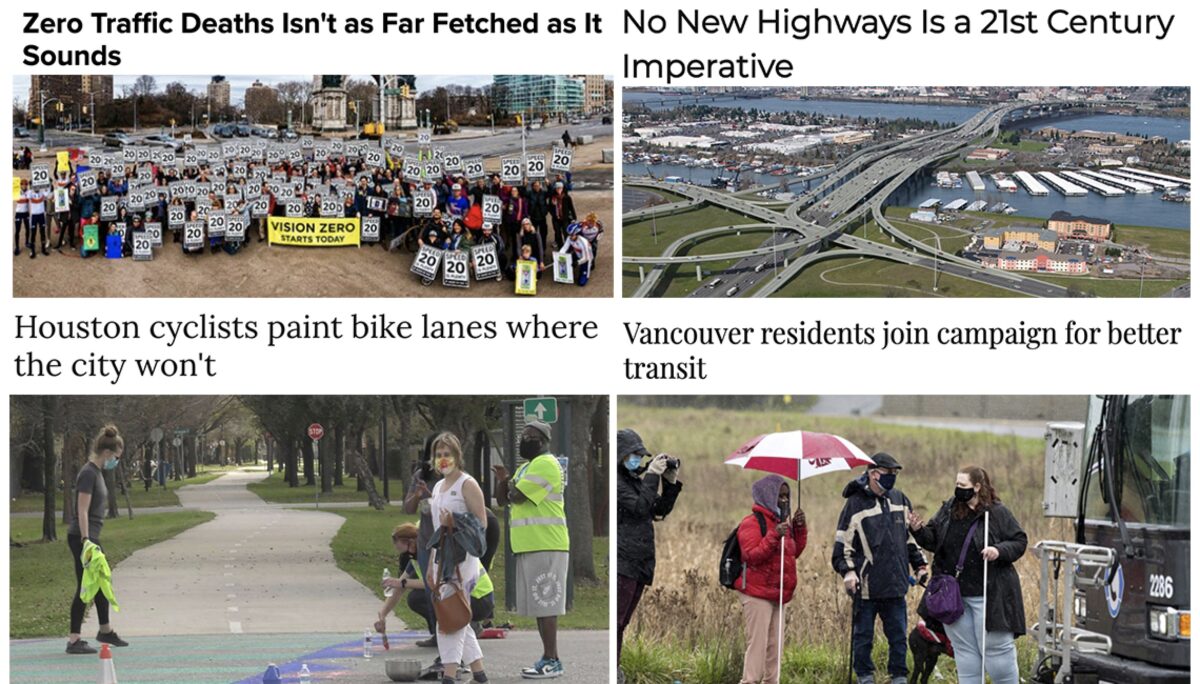 Did you know this? The Economist shares that the precursor to the modern bicycle was inspired by the need for transportation in the aftermath a volcano that wiped out a population of horses.

Shelter for all: We’re keeping a close eye on Portland’s latest housing policy proposal that will make it easier to build tiny shelter villages, allow people to live in cars, and so on.

Federal e-bike bill: The text of the E-BIKE Act is now available. The legislation would create a refundable tax credit of up to $1,500 toward the purchase of an electric-assist bike.

Buttigieg update: The USDOT Sec totally gets it. “Public transportation is part of public health. You can’t separate the two,” is how he justified funding for transit orgs in the American Rescue Plan in this PBS interview. Expect a similar approach as he works toward a major infrastructure funding bill.

Make bikes here: This op-ed in America’s #1 bike industry trade magazine pushes the idea that we should be making more bikes in the U.S.

DIY in TX: Bicycling advocates in Houston are tired of waiting for bike lane gaps to be filled so they’re taking matters into their own hands.

NBA player’s ‘accident’: Many in the cycling world were shocked and appalled that not only did a 7-foot, 6-inch former NBA player become paralyzed after being hit from behind while riding his bicycle; but that the media maddeningly framed the entire thing as an “accident”.

21st century priorities: The editorial board of The Urbanist says an effort by the Washington legislature to fund transportation should not include any new highways.

Nascent fight: While lawmakers talk up highway mega-projects, a plucky group of activists from Disability Rights Washington and Front and Centered garnered headlines of their own last week with a rally and press conference in Vancouver calling for more sidewalks and better transit access.

No good deed: A man spent weeks shoveling sand off a bike path in an English coastal town, only to have local maintenance workers shovel it back.

A big thumbs up for the article about making more Bikes in the USA. We have gotten to the point where Taiwan is a first world country with a standard of living similar to ours, so there is no longer a good reason not to fix this. Of course they have the supply chains in place for this industry, but this current break in the international supply chains of all kinds should give us the motivation we need. When I was a kid, middle class workers in Chicago built bikes that middle class families in Oregon could afford to buy, so there is nothing but laziness, bad monetary policy and bad trade policy in our way. Bikes for the masses can be built in high volume automated factories if we put our minds ( and wallets) to it. Just because it is built in the USA does not mean it has to be built by hand like a Vanilla, and we need to stop thinking that way. If we really want to save the world lets build bikes not self driving Teslas.

Agreed – if you look at how comparatively small firms like Guerrilla Gravity use innovation to manufacture cost-competitive frames domestically, this is an attainable goal with the additional advantages of reduced shipping, supply chain control and marketing goodwill.

Most of the “foreign” car manufacturing in the USA tends to be in the Southern states where wages are low, unions are outlawed, and regulations are lax. I’d be ashamed to buy a bike from such a manufacturer, but then we buy our Surly frames from China, our Shimano hubs from Malaysia, and those Taiwan frame-makers long ago have been outsourcing to India and rural China, areas with even lower wages and fewer regulations.

The idea that a major manufacturer like Trek or Specialized will ever again base their primary manufacturing in the USA is a pipe dream.

I prefer Taiwan by an enormous degree because Taiwan, unlike the USA, is a pluralisitic democracy that has some measure of respect for basic human and civil rights. Taiwan is also a welfare state with universal healthcare, free post-secondary education, and a strong and growing labor movement.

A moratorium on building highways is great… if you want to get blown away by shifting political winds. Banning unfunded maintenance instead changes the conversation from “the rules say no” to “we can’t afford it.”

The frequent use of the term, accident, in the media to refer to avoidable collisions is problematic. I think the article about Shawn Bradley laid out the reasoning for why it shouldn’t be used in cases where people driving cars run into people who are riding bicycles. But the thinking is broadly applicable. Accident should never be used in headlines or leading paragraphs of any article that is describing a vehicle collision.

Another good example of inappropriate use of the term accident to describe vehicle collisions that are the result of reckless behavior was in an interview that was conducted by Scott Simon on NPR’s Weekend Edition on Saturday, March 20: https://www.npr.org/2021/03/20/979491437/despite-reduced-traffic-accidents-have-increased

From the no new freeways article:

For example, while the Columbia River Crossing has been presented as an earthquake readiness project this time around, it in fact remains a sprawl-inducing supersizing of I-5 in Clark County with some greenwashing elements. The era of letting highway expansion megaprojects slide in exchange for a new sidewalk, trail, or park should be over.

Federal e-bike bill: For vehicles (including mopeds) of up to $8,000 and up to 750 watts, a $1,500 deduction for those who itemize. Yet another upper-middle-class (rich) tax break that none of us poor standard-deduction saps can possibly afford to take advantage of.

Its a tax credit, can be taken in addition to the standard deduction, and is fully refundable meaning if you owe $0 in taxes the Government pays you the money.

“The E-BIKE Act tax incentive covers 30 per cent of the e-bike’s cost, up to the value of $1,500, and would either offset the purchaser’s taxes owed or be added to their tax refund for the year in which it was purchased.”

Damn, sounds like Buttigieg has been lurking in some of this town’s discussions:

So, if you have a community where a highway was sent right through a neighborhood, often a neighborhood where there were minoritized residents who were politically considered, literally, the path of least resistance. Sometimes that highway still needs to happen, but it ought to be underground.

It’s basically the story of highway construction in America writ large. Communities of color, low income neighborhoods and neighborhoods with significant immigrant populations were sliced and diced by the Eisenhower freeway system and other infrastructure projects. Sometimes it was systematic and planned destruction of ‘blighted’ neighborhoods, sometimes it was just the path of least resistance because the people didn’t have a seat at the table with the decision makers and elected officials the way that ‘connected’ residents of wealthy neighborhoods did.

Portland is a microcosm of this phenomenon, but it was repeated time and time again in New York, Detroit, Chicago, St Louis, Los Angeles, and almost every major metro area in the US.

And not just “major” metro areas. Vital neighborhoods in the town in Texas I lived in for too long were also sliced through with an interstate highway. And that town’s a 200K suburb without a city attached.

Only 13.7% of the tax filing population were wealthy enough to itemize in 2019 so Blumenauer’s e-bike credit effectively redistributes the taxes of poor and/or working class people upwards to the rich.

While I do think a flat tax break would increase low end adoption and be less regressive I read this current tax credit can be redeemed without itemizing and could be redeemed even if you don’t owe any taxes.

From the text of the bill:

“In the case of an individual, there shall be allowed as a credit against the tax imposed by this subtitle* for any taxable year an amount equal to 30 percent of the cost of any qualified electric bicycle placed in service by the taxpayer during such taxable year.”