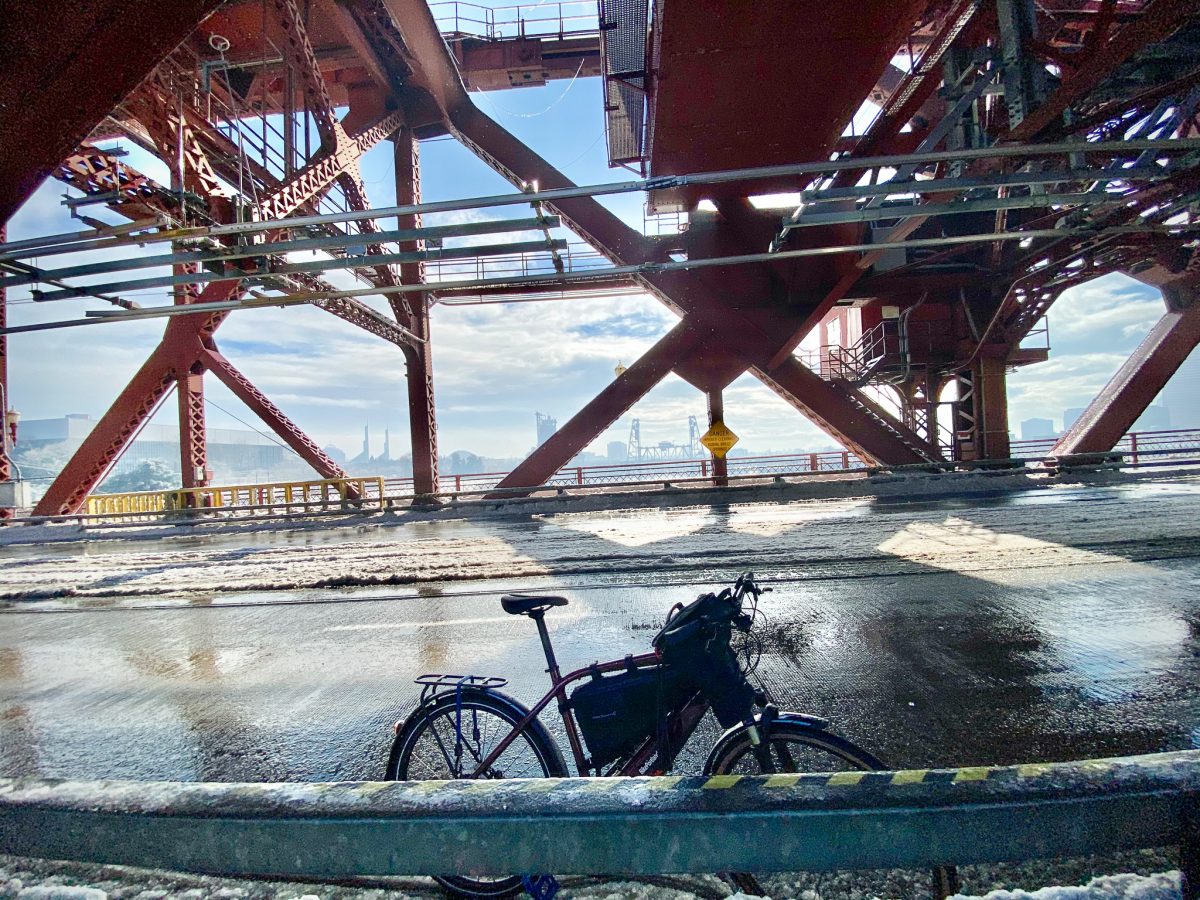 On the main deck of the Broadway Bridge as the sun finally peaked out Monday morning.
(Photos: Jonathan Maus/BikePortland)

Before I share some pics and a recap from the weekend, I want to send virtual hugs and good vibes to everyone who is still without power and/or has gone through a rough few days. There was widespread damage from this storm and not everyone experienced it as a fun frolic. Hang in there friends! If BikePortland can do anything to help, please let me know. 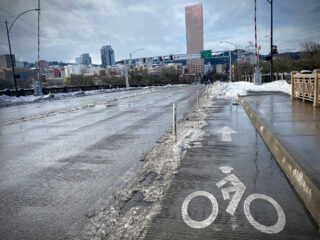 Burnside Bridge around noon on Monday.

It was fun when it started huh? That calm and quiet where neighbors come out in droves and there’s a collective light-bulb moment where people realize how wonderful our roads and public spaces can be without the presence of cars and trucks and buses.

After a solid amount of snow fell Friday, Portland woke up to a winter wonderland Saturday. Sledding, skiing and smiling ensued for some. Then as snow turned to drizzle Sunday night, the city froze. Monday was anything but fun as trees and their limbs came crashing down under the weight of ice citywide. Coupled with widespread power outages and service closures, the storm turned from friend to foe.

And we’re still not out of the woods yet. Not only is there lots of snow and slush still on streets and sidewalks; but walkers, bike riders and other rollers likely have many days of debris and gravel in their future.

For the past four days I’ve biked and walked around quite a bit. I had my share of fun, misadventures, and hair-raising experiences trying to navigate snow-stricken streets.

At first I stayed close to home. I installed spiked tires on my e-bike, grabbed some sleds and headed to Peninsula Park. I had a blast pulling kids up and down North Albina.

Saturday night I headed out for a bigger adventure and decided to check out the last night of the Portland Winter Light Festival. I was several miles from home on NE Alberta Street when I noticed something wrong with my front tire. Unable to fix it and unable to push the bike with the tire/tube installed, I opted to remove them both and just ride the rim. It worked great! It damaged my rim a bit, but the rim still works and it was well worth it. 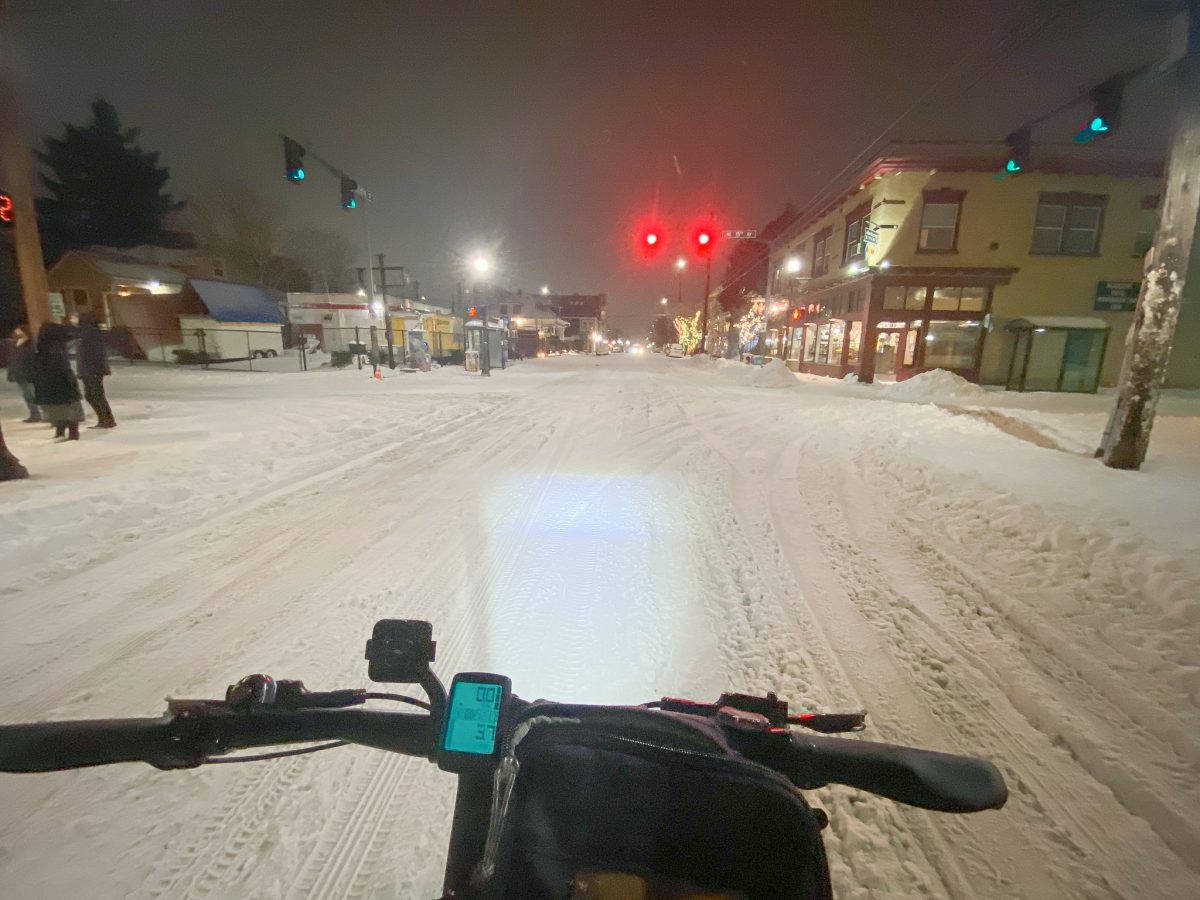 Everything changed Monday morning. The freeze was on and countless tree limbs blocked roads everywhere. I gave the warmer temps a few hours to melt off the ice, then headed out to do some reconnaissance. Conditions were tough. Bike lanes and shoulders were piled high with snow, so I had to share roads with car, truck, and bus drivers. I got into a sticky situation on the NW Lovejoy ramp and rode a streetcar rail/snowbank gauntlet down to 9th. Side streets were even worse. Most were either impassable due to soft snow or they had only one track. On NW 11th I played a game of chicken with someone in a nice Audi.

Over on West Burnside, the lack of space for biking and walking was pronounced. People walked on the busy road as drivers sped by at 30-plus miles an hour. I was riding eastbound near 14th and got splashed when a driver flew by and hit puddles. Of course he acted like nothing happened when we met at the next red light.

As I rolled down SW Madison toward the Hawthorne Bridge I was very pleased to see that Multnomah County had plowed the bikeways leading to and on the bridge. It was a first-class welcome. Unfortunately the snow returned on the viaduct and I was once again sharing the roads.

Hawthorne was reduced to one main track. With side streets not an option, I was very grateful to have an e-bike so I could keep up with drivers. Conditions worsened as I approached SE 60th, but the view was nice.

I looped back toward the central city on Stark, then 28th, then Sandy, eventually crossing the Burnside Bridge just for fun. I headed back up to north Portland via Grand and Williams Avenue.

There’s a lot of snow and slush on the roads, lots of folks without power (including most of downtown), and we are still far from being out of this mess. I hope you’ve managed OK. Let’s all be patient and kind to each other as we get through this.

Here’s a short video with a few clips from my rides:

Front Page
Riding in the Snow

It was awesome playing in the street all weekend. My block in SE is just loaded with kids (and rambunctious adults), and the entire street became our arena for hockey and snow fort building and RC cars and sledding with complete abandon. It was kind of amazing to realize how much of the open space on our block is normally off-limits for the kids. Basically 1/3 of the area between the rows of homes.

Wow, that is indeed a dicey situation you encountered on the Lovejoy ramp.

Is that ramp under PBOT or MultCo jurisdiction? Seems like it would be worth an email to whichever of them it is, since that’s incredibly unsafe.

I’ve heard of tubeless and running low pressures, but tireless and no pressure! WOW!
Also, I noticed that mini-plow on the Hawthorne bridge and the clear bike lane on the Tilikum Bridge (I think). They plow the bridge sidewalks?! Is that a new thing, I don’t remember that from when I was commuting.

Yes, Friday and Saturday closer to home was enjoyable. Was able to ride on street, and around the PCC campus and parking lots. Few cars, light and dry snow, and 27.5 x 2.6 treaded tires. Sunday/Monday I didn’t bother riding. Today, I made a trip to the main PO on Hoyt. No waiting in line at the PO, but getting there was no fun. Most of the Vancouver/Williams bike lane was clear, but not to the left of the diverts on N Williams. Forced into traffic. Flint had a downed power line, and the north part of N Flint was closed. The curb cuts and approaches on the Broadway bridge were not cleared, but the walkway on the Bridge was clear. In general, I found drivers to be impatient, not giving enough room, and as JM says “bully”-ing to pass me. Drivers would white line on the bike lane, rather than move a little into the slushy, wet snow on their right. PBOT made some effort to clear the lanes I rode, but for the most part, the lane or bikeways are not a priority, and that’s pretty obvious.

One thing I’ve noticed more this year is snow being cleared from streets for driving, at the expense of people walking or biking. For instance, streets plowed with all the snow dumped onto the adjacent sidewalks or bike lanes. Or having to wade through dams of plowed, piled snow at each end of sidewalks.

One business near me (non-profit known for environmental consciousness) carefully spend hours clearing its long driveway so its employees could drive snow-free into its parking garage (so they didn’t have to park on the surface lots) while leaving snow piled up on all the public sidewalks around their buildings. Other businesses plowed their parking lots and driveways, piling the snow onto the sidewalks.

I don’t mind snow that’s fallen on sidewalks or in bike lanes, but having snow 2′ or 3′ deep piled on them so people can drive and park snow-free gets tiresome, especially knowing it will still be there days from now.

This. Went for a run yesterday and then tried a short ride this morning to see how the trails are that make up the first part of my commute from Gresham -> SE PDX. The Gresham-Fairview and Springwater trails were very inconsistent, with some parts completely bare and others still with 3-4 inches of ice/snow/slush. A lot of areas fully unable to ride without a fat bike. Tried staying on the road as much as possible during my run but when a car came by I had to do some crazy high knees to get up and over the drifts created by the plows. Good workout but would hate it if I was actually trying to get somewhere.

Left the Springwater this morning to go up Towle/SE 223rd, and at the intersection of Powell the snow had been pushed up to as much as 4+ feet on the sidewalk, pretty much impossible for someone to get by on foot. The bike lanes go from about 18″ to nothing at all or even a foot into the driving lane. I work from home most days but go into the office tomorrow, not sure if I want to try it by bike with how inhospitable the roads are to anyone not in a car (even compared to how bad it normally is).

Did you ever figure out what was wrong with your front tire? As a mechanic, I’m very curious.

No! I didn’t. It’s a super-nice Schwalbe winter tire. The bead just seems to have expanded for some reason. Maybe the cold deformed it. Wish I knew

Traded my wheels for skis/skins this weekend. Alpine Touring gear was ideal for the mixed snow/ice we saw over the weekend. Definitely not as fast as a bike, but it was a fun change of pace. Some of the protected bike lanes are still completely blocked. The lane on Beaverton-Hillsdale Highway looks like it might take a week to melt out.

I’m going to miss the shade from the trees. Sunburns are not a nice thing.