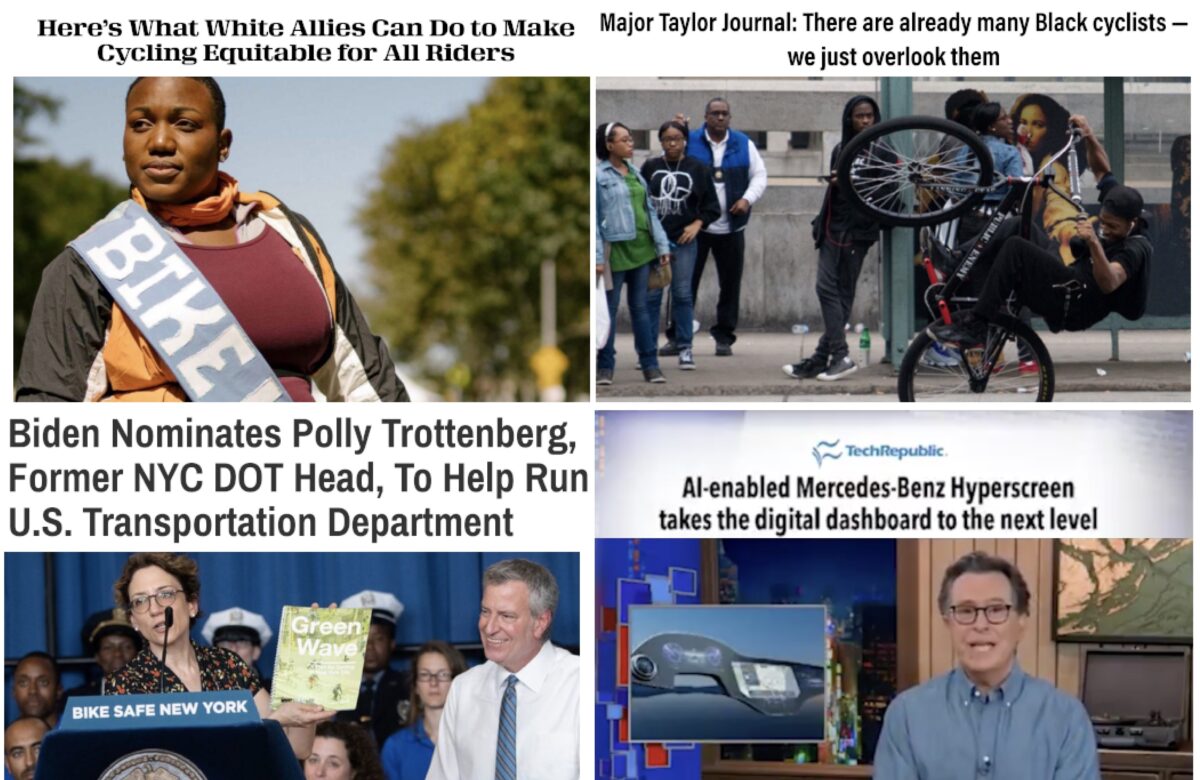 Welcome to the week. Here are the most noteworthy items we came across in the past eight days.

Sign of the times: One of many ripple effects of the bike boom in London is that their transport agency has announced a $1.4 million investment in quality bike parking spaces.

When the Mayor speaks: New York City Bike Mayor Courtney Williams shares important insights into how and why white allies (organizations, advocates, and so on) need to think and act differently in order to level the cycling playing field.

Opposite of the war on cars: US transportation policy is seriously broken when the Federal Transit Agency requests $70 million worth of car parking for a bus rapid transit project.

Dutch mobility webinars: The Dutch Cycling Embassy will host three “digital workshops” for U.S. planners and advocates, with one focused specifically on the Pacific Northwest on February 3rd.

Diversion expanded: A new law in California allows judges to offer diversion for nearly all misdemeanors — including DUI and vehicular manslaughter. Mothers Against Drunk Driving opposed the bill.

Who bikes?: These observations about not seeing Black bike riders are based in New York City but can and should be applied to Portland.

Tweet/video of the Week: We shared a link to the absurd new Mercedes-Benz touchscreen last week so it was fun to see Stephen Colbert rip it apart on his show:

As ever, Colbert is on point, this time about @MercedesBenzUSA / @MercedesBenz and their new monster screen so you can watch TV instead of looking at the road. #RoadSafety #alateshow pic.twitter.com/fS9PmKdaGE

At some point [now, please] we’re going to need to limit vehicle dashboard screens to keep the focus on the road. Really hoping this next administration will make some changes to prevent ever-increasing distracted driving and to improve vehicle design for the safety of people outside the car.

Until cell phones are outlawed to be turned on while in a moving vehicle then distracted driving will always be there.

The original comment was in regards to being a distracted driver and I was trying to indicate that to truly be not distracted would require extreme measures. Heck even eating or talking with a passenger could be distracted driving as well.
I don’t claim to have a solution, but I expect there may never be a full proof one.

I haven’t been to Japan since before Fukushima so maybe things have changed but they could watch TV while driving. Cars could get broadcast TV signals on the front screen available to the driver and drivers would often use these in traffic. Yet Japanese traffic is very orderly and I never witnessed an accident there. Compared to the complete mess in other Asian countries, Japan is the Germany of the east.

Dutch Mobility Webminars: We had the live in-person version back in 2018 here in the Piedmont Triad of NC, same Mobycon team from the Netherlands. It was definitely worth the money I paid to attend (I was the only non-government person there, everyone else got the fees paid through their employers). You learn the current Dutch traffic calming techniques, see pictures of the complete-street laying machines (no joke, they are real, lays pre-fabricated pavement, sidewalks, and crosswalks all at once as a single unit, like fabric); Painted roundabouts; And the concept of the “shared street” where car drivers are guests. Lots of group exercises.

Re: the “who bikes” story, the SEbikes phenomenon is off the hook in NY, LA, and a few other cities across US. Brad Simms was the 2020 readers choice BMX rider of the year. I grew up riding with BIPOC, had a team of young BIPOC mtbers that crushed the white suburban kids when I was doing an urban bike club thang. We don’t need to contrive a race-specific initiative to increase BIPOC ridership. It’s happening, just maybe not to the degree and speed to alleviate white guilt.

It has everything to do with it being BMX street riding and somewhat “outlaw” in the same way skateboarding is. Anytime you’re using public architecture and street as your personal skatepark someone is going to get mad, and the cycling commuters and many of the athletes still don’t consider the skill and dedication it takes.

“Being an ally means recognizing that wealthy, majority-white neighborhoods already have a proliferation of protected bike lanes. And it means advocating to pause the work being done there and pivot to typically overlooked communities.”

I think this suggests that we should pause active transportation infrastructure projects in wealthier areas of Portland and focus on underserved and infrastructure-poor communities.

Agreed, Soren. This was some of what I was trying to do when we worked on Safer Clinton. It’s a greenway that is a “safe route” for 7 (iirc) schools. Focus on the schools and getting the kids there safely all across the region. This will naturally build new generations of riders and there’s no reason political equity shouldn’t support kids being safe. I’ve signed up for the webinar and am hoping to learn more about how we can make our greenway safer out east.

I regret my role in these projects.

Either-or thinking. We need to do both.