(A few of the different lane types in the central city. Photos: Jonathan Maus/BikePortland)

Doing more with what you have is a fitting mantra for the Portland Bureau of Transportation these days — and I’m not just talking about their pandemic-ravaged budget.

As the agency grapples with the need to move more people in different types of vehicles on the same amount of road space, they’ve undertaken a dizzying array of lane restriping projects. On larger streets in neighborhoods outside downtown (like SE 162nd Avenue) they’re doing road diets. In the central city where road widths are narrower, there’s been a big push in the past three years to make dedicated lanes for bus and transit vehicles.

Since the grassroots Portland Bus Lane Project effort got off the ground in 2017 (followed by the Rose Lane Project launched one year ago this week), PBOT has added several new types of lanes into the mix. There’s “Bus Only”, “LRT Bus Only”, “Bike Bus Only”, “BAT” lanes and even “FAT” lanes.

What do all these mean? Can you ride a bike in them? If you’re confused, you’re not alone. Below is my attempt at a user guide for Portland’s new lanes. 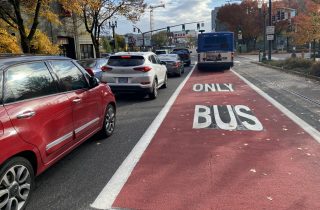 New lane on Martin Luther King Jr. Blvd next to the Convention Center.

When the new “Bus Only” lanes were installed on the Martin Luther King Jr. Blvd and Grand couplet a few weeks ago, I was excited but also a bit disappointed. MLK/Grand is a vital north-south corridor and cycling advocates have been dreaming for a bike lane on them for years (decades?). We missed a huge opportunity when the eastside streetcar was built in 2012. And now another opportunity has passed us by.

The new (often colored red) Bus Only lanes on MLK/Grand are meant only for bus operators. No bike riders allowed. Same with the red lanes on SW Main and 1st entering downtown: stay out of them (at least in that situation there’s an adjacent bike lane).

I’d say about 98% of the population doesn’t know that “LRT” stands for light rail transit. PBOT knows it’s a puzzling acronym, but they’re bound by approved federal guidelines when it comes to markings they can use. You’ll see the LRT marking on sections of the new MLK/Grand lanes where the streetcar tracks and bus lane merge into one. And no, you can’t bike in these either. 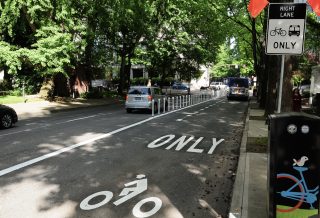 This marking has been in Portland for many years. It’s pretty self explanatory and communicated with either the word “Bike” or the bike symbol. As the name suggests, they’re intended to be shared by TriMet and bicycle operators. A good example of one can be found on North Vancouver Avenue just south of Broadway. PBOT made a slight change to the bike/bus lane style on SW Madison between 4th and the Hawthorne Bridge. That’s a shared bus/bike lane with a special carve-out for a bike lane to create room for bike riders to pass a bus. 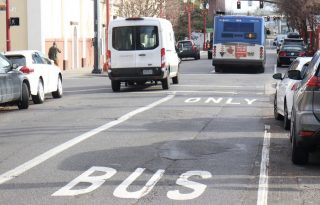 It’s kind of shame this fun acronym with superhero vibes has been reserved for planning discussions and (to my knowledge) hasn’t been used in actual markings. It stands for Business Access & Transit. PBOT says, “BAT lanes are designed to prioritize transit while still allowing people driving or people biking to use them to turn and access side streets.” A good example of BAT lanes were installed on NW Everett in August 2019.

I first saw these mentioned at the November 5th PBOT Freight Advisory Committee meeting. It stands for freight and turn. I include this one partly for fun, because it likely won’t ever be official. Not only would no one know what it stands for, but there are obvious connotations that would get PBOT in a spot of bother politically-speaking. On a more serious note, it’s interesting to see how PBOT feels the need to cater to freight truck operator needs as they roll out these bus priority projects. Definitely something to watch as things move forward. 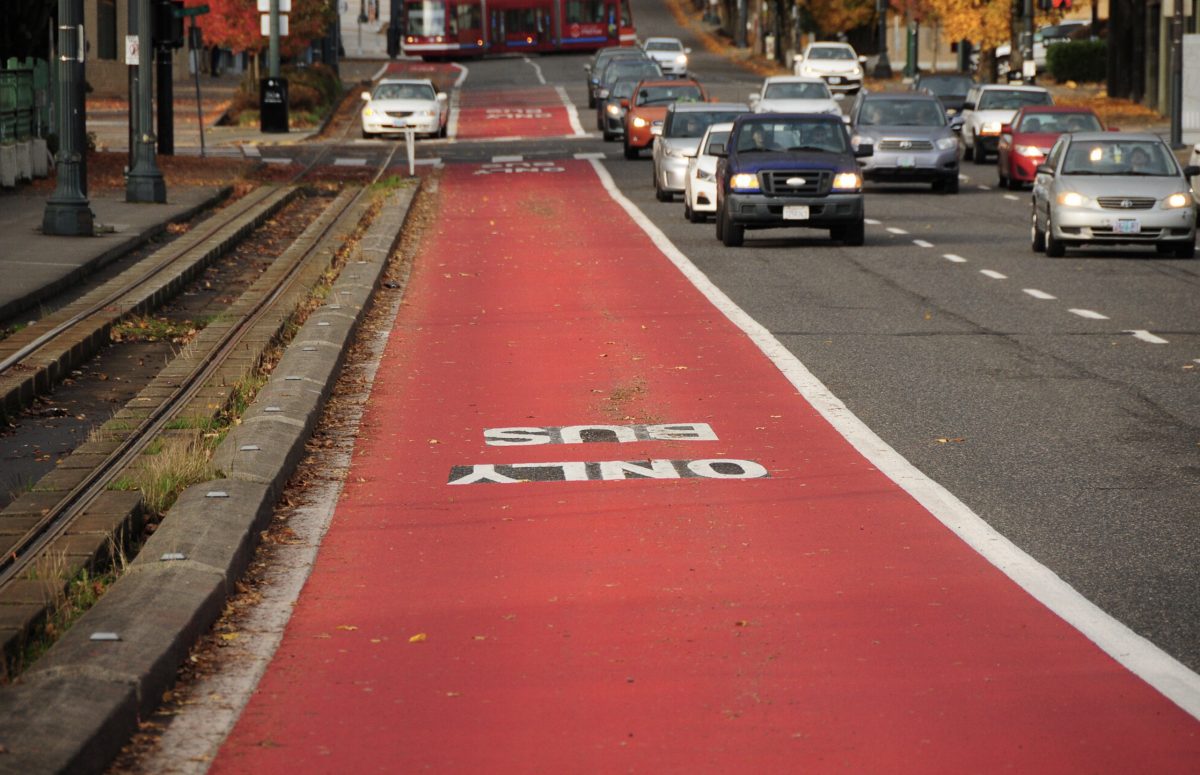 I share all this to make sure you understand what these new lanes are all about. But there are other reasons to remain vigilant as PBOT rolls more of these projects out.

We should be wary not only of how these lanes take over precious roadway space, but also how the highly non-standardized treatments might introduce confusion (PBOT is also very inconsistent when it comes to bike lane designs) for all road users. Confusion is not good when it comes to road design — especially for vulnerable people like bicycle users.

It’s also worth noting that PBOT’s Bicycle Advisory Committee shares some of my concerns. In January of this year they wrote a letter to Portland City Council that said, “While we do not believe that shared bus/bike lanes are a good design, we want to make it clear that people on bicycles should be allowed to ride in bus lanes, at least until protected bicycle lanes are provided on a corridor.”

If PBOT took that advice there are key sections of the new MLK/Grand bus lanes where bicycles should be explicitly allowed — like south of Holladay to Davis.

PBOT says they’re creating a system where bus and bike operators both have plenty of room — just not on the same streets. “Much of the Central City in Motion plan was centered on prioritizing certain streets for certain uses, since not all streets are created equal,” said Capital Projects Communications Coordinator Hannah Schafer when I asked her about the new bus lanes on MLK/Grand, “In some cases, bikes and buses sharing a lane makes sense. But in other cases, like on MLK and Grand between the streetcar tracks, it doesn’t.”

as someone who’s been bicycling downhill on MLK a lot since March, I can say the new paint is a welcome improvement. ‘BUS ONLY’ feels like a message to cars, not to bikes

Yes. I agree! And have been riding it too.

MLK southbound has always been fine up to Broadway, but the bus lane extends it even farther. I’m glad we can come out of the closet about that.

Surely it isn’t for everyone, but not having to zigzag your ride around MLK instead of just riding it is… if you’ll pardon the expression… a dream for those who can. It stung most of all three years ago, knowing there was a straight shot to Salem for the eclipse.

Go for it! In reality there is an extremely low chance you would ever be ticketed for riding in a bus lane. And if you’re riding downhill, you don’t need to feel bad about delaying the bus.

And of course there are Gores (hatched areas or islands that ban all traffic), HOV lanes, pedestrian lanes (on outer Powell and somewhere in SW), bike boxes, shared bike and turn lanes, and so on.

I always enjoy how you keep us up-to-date on road and access changes. My approach would be to stay out of anything painted red no matter how it is rated. In terms of streets like MLK and Hawthorne being redesigned for biking I see that as a long-term and almost futile goal. Those streets are so heavily traveled and so close to very useful parallel streets that I do not think it is worth the time and effort to try and make them more bike accessible.

MLK and Hawthorne are “heavily traveled [by cars]” because they are designed for cars with zero protected infrastructure. If they had protected bike lanes, they would be heavily traveled by people on bikes. If we removed the sidewalks on Hawthorne and added two cars lanes, people could walk on useful parallel streets as well. Our streets reflect our priorities and modal share.

I propose a new type of lane for wide 3 lane one-way streets (e.g. Grand/MLK): Freight and Auto Rapid Transit. ONE dedicated lane for large trucks and personal automobiles, just for them. Buses, bikes, scooters, etc. are relegated to the remaining 2 lanes and have to just get by with those 2 dedicated lanes. Finally, cars can have their own lane and not have to “share” the road with those Others. Bring on the FART lane!

Perhaps we could color these special lanes dark grey?

And miss an opportunity to color the FART lane brown?

Are you thinking a shade similar to that of bare asphalt?

dang you beat me to it

The signage posted alongside the BAT lane is what tells you that right turns and bikes are allowed.

Interesting for a nation that almost always only builds LRTs to not know what LRT is.

Given that the streetcar is on a track and can’t really decide which lane it picks, simply marking it “BUS ONLY” would be sufficient.

Perhaps “NO CARS OR TRUCKS, YOU A-HOLES” would be more effective anyway?

I hope we can get some FART lanes soon

Eh… it’s still fun as hell to shred up and down the middle of the tracks on MLK/Grand. Especially in the off-peak hours

What the heck is shredding??
Yours truly, Fred