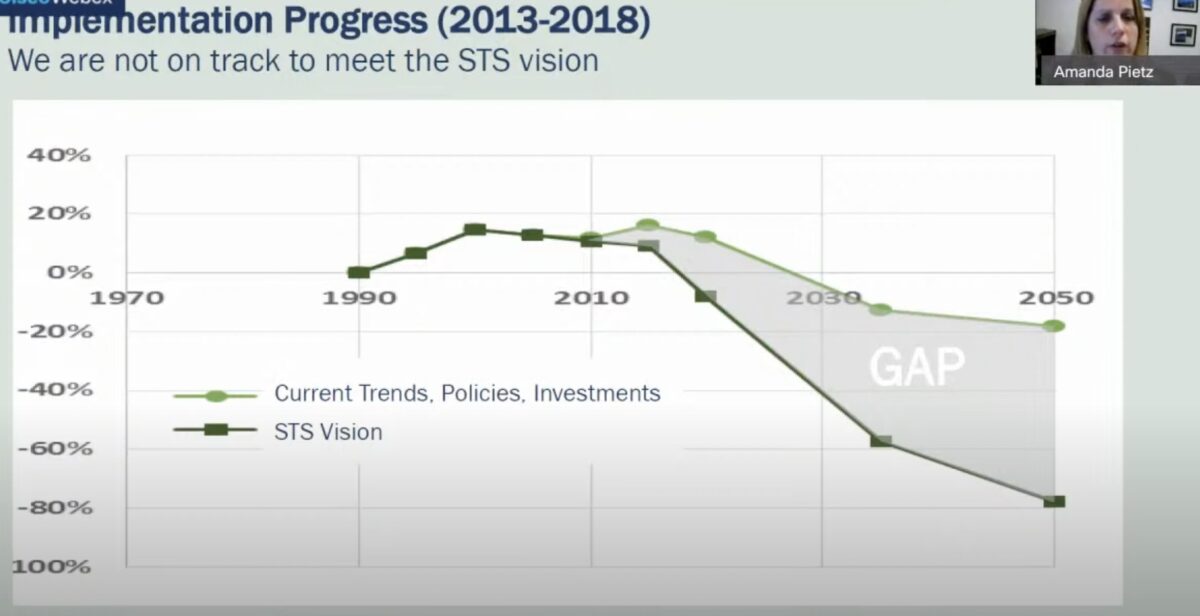 “We have a significant gap between where we are likely to go and where we need to go.”
— Amanda Pietz, ODOT Climate Office

The Oregon Department of Transportation isn’t moving fast enough to meet greenhouse gas (GHG) reduction goals. That’s according to ODOT Climate Office Director Amanda Pietz, who served up the bad news at a meeting of the Oregon Transportation Commission yesterday.

During a presentation to the OTC that included a chart on a slide with the word “Gap” between current trends and Oregon’s reduction goals, Pietz said, “We’ve developed a statewide transportation options program, we were able to secure multimodal funding thanks to the legislature — so there’s some positive in there. But those are outweighed unfortunately by the negative people driving more, people holding on to their cars longer, and a lot of fuel inefficient cars on the road. So that’s resulted in an increase in emissions. So, we’re moving in the complete wrong direction… We have a significant gap between where we are likely to go and where we need to go.”

Meredith Connolly, Oregon director for nonprofit advocacy group Climate Solutions, was encouraged to hear this rare bit of candor from an ODOT staffer. “The first step to fixing a problem is admitting you have one,” Connolly shared with BikePortland. “So it’s encouraging to hear an admission from within ODOT’s ranks that they need to step it up on climate. Now we need to see them actually do something about it!”

To that end, Pietz presented OTC members with more about how ODOT plans to close the emissions gap. Or as she put it yesterday: “We’re looking to help turn the ODOT ship… integrating climate means shifting the heart of our practices.” 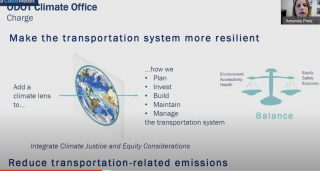 ODOT’s Climate Office was formed this past spring and currently has seven full-time staffers. As a first order of business, Pietz said they’re adding a “climate lens” to everything ODOT does, including how they invest, build, and manage our transportation system.

But she added a caveat: “I’m purposeful in adding the word ‘lens’ to that, because climate will be one factor among many to influence our decisions, and will need to be balanced for safety, equity and other key outcomes.”

The most promising use of this lens will come as ODOT — for the first time ever — will apply it to all projects in its Statewide Transportation Improvement Program (STIP, the list projects must be on before they get funded and built). The 2024-2027 STIP process is just getting underway and it gives ODOT a golden opportunity to make good on climate promises.

Beyond the STIP, the work of the Climate Office has three main parts: mitigation (reducing GHG emissions from the transportation sector), adaptation (creating a system more resilient to floods, fires, evacuation needs, coastal erosion, and so on), and sustainability (initiatives like solar highways, which Pietz said have fallen off the priority list due to other more pressing needs). Pietz said they see the most immediate potential in switching to electric vehicles and encouraging the use of cleaner fuels and she made a point to say EVs stand for more than just cars. “Think of micromobility options like electric scooters, electric bikes, but also on the heavy side like freight and buses.”

Chart on left is ODOT’s assessment of the impact various actions will have on closing GHG emissions gap.

ODOT also sees a silver lining in the Covid-19 crisis. Pietz pointed out that the viability of telecommuting has “been proven” thanks to the pandemic and that the reduction in trips is a positive outcome. “We as an agency really want to support those kind of transitions and we also want to capture the benefits of [telecommuting].” 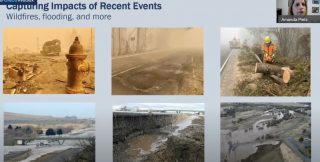 ODOT will take an increasing role in climate disaster preparation and response.

One transition that’s much less positive for ODOT (and everyone else) is how we’ve quickly gone from climate change prevention, to climate change adaptation. In coming years we’ll be hearing much more from ODOT about their role in dealing with climate change related disasters like fires, floods, and rising sea levels. Today, ODOT Director Kris Strickler will go in front of the State Emergency Board to support a $50 million wildfire cleanup project the agency will carry out. The work would go beyond the right-of-way and represents a new direction for ODOT if we assume “climate fires” (which is how new OTC member Maurice Henderson referred to them in the meeting yesterday) will become the future norm. It also which sets up a conflict of interest because ODOT’s failure to reduce GHG emissions and their car-centric planning are directly related to the intensity and of the recent fires and Strickler himself believes widening highways leads to lower emissions.

Investing more in “transportation options” (not driving) is a part of ODOT’s strategy (see chart), but it remains to be seen whether they can steer their ship far enough away from the sirens of auto capacity to move the needle for bicycling, transit, and micromobility.

Pietz is optimistic: “The Governor’s executive order was a recognition that we need to get back on track. The good news is that we can catch up. That gap is achievable.”

Let’s start with the Rose Quarter project (and the other regional highway expansions they’re doing that are getting far less attention).

One has to wonder if ODOT couldn’t be a better environmental steward of the land next to roads. Carbon sequestration may not be the solution, but it is part of the solution. Even “greenwashing” our roadsides would add to the betterment.

It’s not just local transportation options though. I often wonder how the money we throw at our freeway budget would go on things like double-tracking the Portland-Eugene mainline that Amtrak takes, and working with WSDOT to do the same to Seattle. Frequency, more than speed, is the reason I’ve not been able to take the train to Salem/Eugene for a number of my last trips, and frequency is the WHOLE reason my buddy (who works for Facebook up in Seattle) isn’t able to just Amtrak it up there & back. He’d far rather work on the train and not have to drive, but one daily train each way basically assures that he’ll never have a train that works with his schedule.

Everyone wants to talk about high speed rail, and I get that, but double-track & electrify the current corridor (which is already good for 80mph+ most of the way) and that opens up a ton of flexibility to offer usable transportation options for mid-distance intercity travel that could get a lot of cars off the road.

I can’t see how ODOT is set up to achieve climate goals. Their focus is roadbuilding…

ODOT should be required to apply the “climate lens” on existing projects, starting with next years budget instead of future projects (2024-2027)

How ironic to see the headline, “Leader of ODOT Climate Office: ‘We’re moving in the complete wrong direction’”, then scroll down and see the first “Related Posts” headline: “Oregon Senate confirms ODOT director who says freeway widening is a climate change strategy”.

Amanda Pietz is a left over employee of Matt Garret hires. I observed her at previous OTC meetings. She oversaw the bike program and reported to the OTC in 2019 that her office only put down 1 lane of cycle mile per year between 2009 and 2019. She wasn’t hired to be successful. She was hired to fill a role and in my observations this was a cushy job for her to manufacture consent that ODOT was doing something for cyclists, but actually never did much.

I’m not really surprised she got this ‘promotion’. For Strickland, just getting someone hired in a new office was the goal. Getting people who will actually get the job done is a whole other story. I didn’t watch the meeting but unless they are talking about actually removing lane space for cyclists and protected bike lanes, this is all just window coverings on an agency that doesn’t really care about protecting cyclists.

Wow, the thought of a state DOT with a climate office is like a Klan chapter with an African-American outreach office!