It’s not every day a project that’s a top priority for an entire quadrant gets authorized for construction — much less one that local activists have been pushing on for 30 years. That’s why Portland City Council’s support of the Southwest Capitol Highway project yesterday was such a big deal. 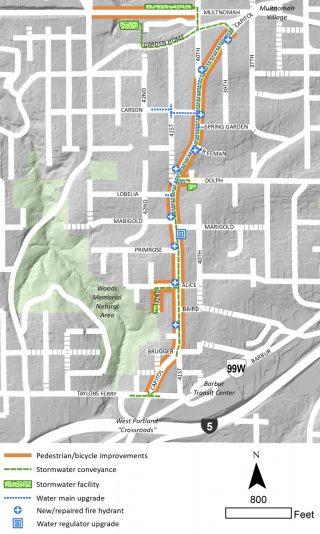 You might recall how we took a closer look at this project in 2015. SW Neighborhoods Inc (SWNI, the local neighborhood coalition) volunteer Roger Averbeck and I rode in unpaved shoulders as drivers flew by us with just inches to spare. “Here in southwest,” Averbeck shared. “You can walk your dog around the block, but people aren’t able to actually get to any destinations. So we’re trying to fix that.”

After decades of promises, the City of Portland finally has the funding and plans assembled to rebuild about one mile of SW Capitol Highway between Multnomah Village and Taylors Ferry Road. A major reason for the delay were the cost-prohibitive stormwater management, topography, and right-of-way challenges that plague many infrastructure projects in southwest Portland. To get this project across the finish line the Portland Bureau of Transportation had to visit 60 property owners and negotiate 90 right-of-way easements and property acquisitions.

Another reason for the delay was the need to cobble funding from many sources including three different city bureaus. In the end, the $26.1 million budget is split between the bureaus of transportation ($11.5 million split between Fixing Our Streets program and system development charges), environmental services ($10.6 million), and water ($2 million). An additional $2 million comes from Oregon Lottery funds.

Here are the highlights of what will be built with this money:
– A six-foot wide sidewalk and six-foot wide, raised, curb-protected bike lane on the east side of Capitol Highway.
– A 12-foot wide multi-use path on the west side with a six-foot bike path.
– A 300-foot long, 10-foot wide multi-use path on north side of SW Multnomah west of 40th.
– A protected bikeway and walkway on both sides of Multnomah between 40th and 45th avenues.
– Reconstruction of all four corners of Multnomah and 40th.
– Four major stormwater treatment and retention basins that will manage runoff from a 50-acre area.
– Four new crossing updates that will line up with consolidated bus stop locations.

In an email on Monday, Multnomah Neighborhood Association SW Capitol Highway Subcommittee Chair Chris Lyons encouraged local residents to contact City Hall to support the project in its entirety. “Building the entire project is vital to this corridor. [We] do not want to see any scope reductions,” read a list of suggested talking points. “The neighborhood has been waiting for this project for nearly three decades and has been deeply involved in the planning process. We are thrilled that the project is almost a reality and so excited to see it completed.”

It was just another hurdle cleared for the many dedicated people who’ve worked on this project over the years. Thank you!

If all goes according to plan construction will begin in February of 2021 and be completed by mid-2022.

The stretch on the north side of Multnomah between 40th and 45th is going to be tricky. There’s a pretty steep drop-off into a ravine on that side, and I can’t believe there’s 10 feet of level ground on that side of the street.

Isn’t the dropoff on the south side of Multnomah?

The grass field by 40th doesn’t have as steep of a drop off until west of there by where Vermont creek crosses multnomah.

If major commercial streets in Portland were redesigned like this with protected cycletracks or PBLs, the modal share would skyrocket. Thanks PBOT!

This is basically what the Metro bond measure would do throughout the region – not every commercial street, but many of the big ones like TV Hwy, 82nd, McLoughlin, and others.

It is what we hope it will do should it pass. There are very few actual plans for PBLs or cycle tracks in the document. Please correct me if I’m mistaken. My worry is that it will, as is often the case, go toward ODOT’s “safety improvements” which sidestep the bike bill (ORS 366.514), for example, expanding shoulders, creating grossly impractical switchback crossings etc). As an aside I hope a representative proposes an amendment to the bike bill which explicitly requires physically separated infrastructure. Anyone at bikeloud or oregonwalks working on this?

Earwriste is right. The Metro 2020 transport package ‘media’ says it will include bike lanes, but they aren’t listed in the package. Which means we will have to fight for each cycle lane individually. Merely adding buzzwords at the last stage of an unequal consultation processes is nice but not enough and we should be wary of voting for new taxes without express cycle lanes in them. This is exactly what happened with HB2017. They added the freeway projects at the end of the bill. HB 2017 was supposed to be an Equity Plan from 2014, drafted by Leslie who sits on the Street (no)Trust Board.

This Equity plan failed and instead we got HB2017. The Street (no) Trust rolls over for ODOT every step of the way. We are under no obligation to vote for them. They just gave their Alice awards to the next DOT with a $$ocial equity hand out. In my opinion Lee Beyer has been the unsung hero for transport advocacy for the state of Oregon on the top committee delivering SB 1601. Instead Street Trust gave their awards to paid bureaucrats who are about to hand out another round of funding to the Street Trust. How convenient.

All of those broken promises must be the ‘negotiations’ that Kate Brown was referring to. She is manufacturing consent herself. HB2017 was a scam for advocates because it included the same highway projects we’ve been protesting against for a LONG time. Same for Metro 2020 all of the road projects in west Portland magically get funding.

Kate Brown showed all the other politicians how to screw over cyclists. And ODOT has been doing it ever since.

The problem with bonds in general is how easily politicians can legally redirect the funding to projects that have nothing to do with the original intent. I’ve seen transportation bonds redirected to pay for university buildings and prisons. I’m curious, how does Oregon law restrict their actual use versus what is printed on the ballot?

That’s not true. The Metro bond only funds unprotected gutter bike lanes outside of the SW Corridor.

Thats not true either. There is zero concrete plans except for the SW Corridor. This is a funding arm that can and will allow pbot to built rpbls.

Does anyone reading this post use Capitol Hwy? I’m using Barbur, which has less climbing and (mostly) wider bike lanes. What has your experience been?

Occasionally if I’ve just come up through River View Cemetery, I’ll take Terwilliger to Taylors Ferry to Capitol Hwy. But more often, I peel off of Taylors Ferry at 26th then zig zag along and pop out on Multnomah by the food carts and such.

Would you suggest SW Taylors Ferry as a commute route? Seems a bit out of the way for my uses, but still good to know.

The two roads serve different functions. Capitol is more of a minor family-oriented local “main street” while Barbur is more a regional expressway, faster and more gradual on climbs, but much faster traffic and facilities designed for fearless cyclists.

I wouldn’t say I’m fearless. But I’d rather use a wide fast road than a narrow winding road.

Your assessment is astute. Which is why I prefer the fast direct route that Barbur offers. I use it as a bike highway to get to Lake Oswego. If my destination was somewhere in the hills I might ride Cptl Hwy.

I ride it all the time, but I live in the Crestwood neighborhood just south of Taylor’s Ferry. One of the problems with SW Portland is the lack of safe north/south connectivity to points beyond your immediate neighborhood. Barbur works in some situations, however it’s pretty far out of direction in many others. For relatively direct north/south routes, we have SW 80th, SW 62nd, SW 45th, and Capitol HWY but none of them safely accommodate road users other than drivers. Other low-volume options are difficult due to topography and/or circuitous routes.

East-West, too. Taylors Ferry, for example, is not safe for biking: steep climbs, no shoulder, poor speed limit compliance, heavy traffic, and no real side-street options because of terrain.

Crestwood is where I pick up Barbur, ironically. From there it’s all downhill (on the way home). The hill coming out of Multnomah Village and Hillsdale would be bummers.

SW hills are definitely under served. I suppose part of the problem is, where do you start? 99% of the roads have very little pavement outside the lines and the shoulders are gravel and dirt, if they exits. I imagine when that area was settled, the design principles didn’t include bicycle commuters. Although, there were probably a lot more pedestrians and public transit. I am just guessing that the SW hills are mostly post-war.

I prefer side streets. Using the rebuilt trail where SW 4th Ave meets SW Woods Street by Barbur. I walk on that trail that connects to Terwilliger. Then, I take side streets. But, with the smooth surface of Multnomah (east of 45th) and Capitol and repaving and this stuff, why not take Capitol? Barbur is a river of water in rain.

The short answer is, Capitol Hhwy is a narrow winding road through the hills.

Barbur in the rain is pretty damn bad. More so because of the debris, I feel. I saw a PBOT scout truck run up there one morning after the first big rain. The debris improved after that, but it’s still there.

As far as Capitol Hwy goes, it’s got more climbing – steeper to boot, it’s much narrower than Barbur, and overall feels indirect for my purposes. Maybe some of that will change with the improvements? But the hills I think would still be hard to get over (pun intended).

I took a speculative ride home on Terwilliger from Barbur to SW 6th Ave. It was a bit scary with the blind curves and again much debris.

Barbur is hair raising, but the risk is very clear and predictable. For me the worst spots are headed into town; the car wash at Terwilliger, and the last stretch from Capitol Hwy to Nato.

It looks a lot like the design for outer Powell.

It’s amazing how incredibly bad the current conditions for walking or biking are in that photo.

Par the course for the majority of Southwest Portland. This is far from the worst spot.