“My hope is that this book takes a bit of the sting out of the loss of racing and further provides some inspiration for the future.”
— Drew Coleman

Love of cyclocross runs deep in Portland. The pain of loss over a season cancelled due to coronavirus concerns has been made more acute as toxic air has robbed us of even training rides — which themselves were a poor substitute for the competition, camaraderie, and blissful chaos that defines the sport.

Now, just as your muscle memory twitches for the start of ‘cross season, a new book will have to suffice. Portland-based photographer Drew Coleman (whose work has been featured on BikePortland several times) just released Of Crank and Chain: Cyclocross, a book he calls a “240 page photographic and written express of domestic cyclocross.” The book’s editor and co-author is Bend resident, poet and former professional ‘cross racer Laura Winberry.

The book features compelling scenes selected from tens of thousands of images in a culling process that took Coleman nearly four months. The images were all taken in 2019, but don’t expect the book to deliver a recap of the season. In fact, there are no captions and only superfans will know which racers they’re looking at.

Captured locally in the Pacific Northwest as well as at UCI events around the nation, the book is not organized by the events themselves, but rather by parts of a race day from the events spanning the season, blended together and presented as one continuous event. Mixing black and white along with color, none of the images contain captions of the who and the where, because, in a way, a season is a singular event and also features images of amateurs and professionals and doesn’t draw a distinction between them. In the United States, all racers suffer on the same track on any given day. In that respect, American cyclocross paints amateurs and pros with essentially the same brush. The book is about what it is to race cyclocross and what goes into it, as opposed to a year in review. 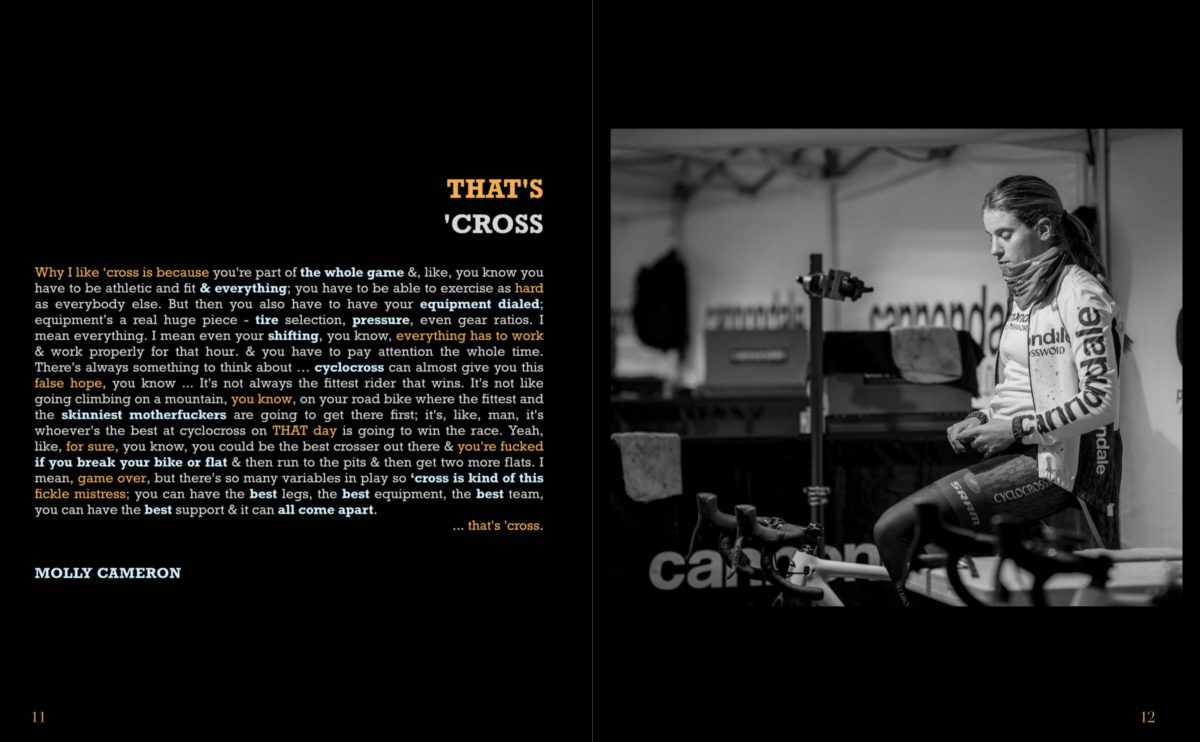 To create context for the images, Coleman and Winberry (who published a collection of poems about cyclocross in 2018) included essays from notable ‘cross figures like Portland’s Molly Cameron, and National Champions Gage Hecht, Clara Honsinger, and Stephen Hyde.

“My hope is that this book takes a bit of the sting out of the loss of racing and further provides some inspiration for the future,” Coleman says.

There are two versions of the book available via Blurb for $65 or $115.

Excellent presentation of the book, Jonathan! Many thanks.

Drew, lovely work. I’m clicking back and forth between the two versions and can’t spot the difference. Both look 8×10 softcover, high-gloss.

Thanks! They are the same in terms of content. The difference lies in overall quality of presentation – Image & color representation, satin finish (as opposed to matte), thicker paper, opens more flat when looking at full page images. That’s really it. That said, the Trade Book is great!

“Cross is kinda this fickle mistress…” Ain’t that the truth. Can’t wait to thumb through a copy in person.We are so lucky to have a slew of talented photographers, racers, and promoters here in Oregon. I miss my cross family dearly.

Truth. I’m missing all the faces! Oregon certainly is great place to be a cross racer / fan / creative

Thanks so much! The project kept me on the rails during these interesting times.