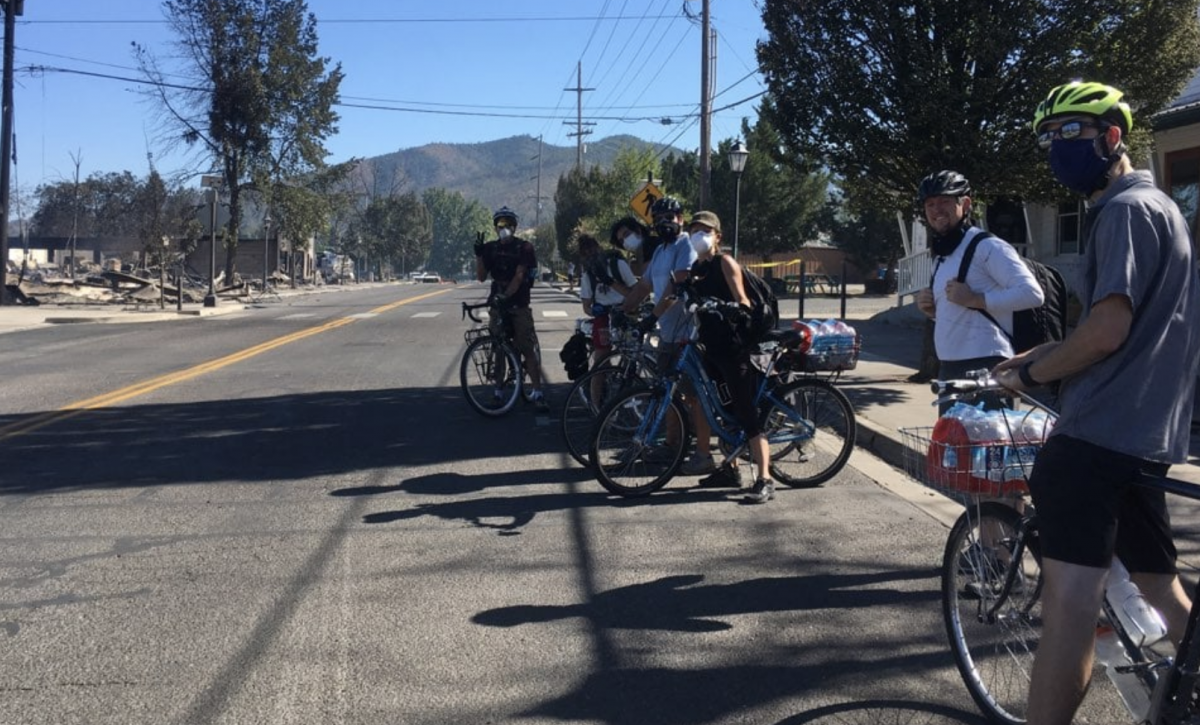 Several towns in southern Oregon have been devastated by wildfire. Among the ashes, people are coming together to support one another. 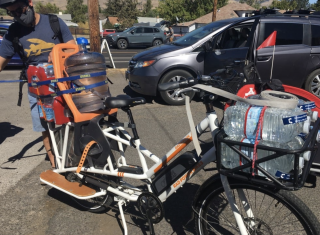 Today I heard about the Ashland Bike Brigade, a group of people who are using their bikes to deliver supplies to victims of the Almeda Fire who’ve stayed in their homes despite evacuation orders.

Roadblocks are keeping cars out of evacuation zones near the Almeda Fire in Jackson County, but cyclists can still get in. So a group of cyclists is delivering resources to people stranded in their homes.

It didn’t matter that the skies were filling with smoke for this group of cyclists in Ashland, because they had a mission: to bring food and water to people in Talent and Phoenix who are running low.

Local officials aren’t allowing any cars into those nearby towns, even residents, because of gas leaks and downed power lines. The Almeda Fire first started in Ashland on Tuesday, but strong winds pushed it north where it destroyed hundreds of homes in nearby communities. Many people are still living there and they don’t have electricity or potable water.

According to JPR, about 100 people have stepped up to volunteer with the brigade. There’s a Google Spreadsheet where they post their contact info, what type of help they can offer, and when they’re available to make deliveries.

Bike Brigade volunteer Donnie Maclurcan posted yesterday on Facebook that they delivered over 50 gallons of water by bike to stranded residents of Talent. “Some of the people we encountered were in a bad way, dehydrated and in desperate need of connection and hope.” In addition to water and food they also snapped photos of properties to share with evacuees who had no way of knowing if their homes survived.

Sarah Davidson-Homewood with Bravo Outings, an Ashland-based transportation and tour company, says she’s partnered with the group to help with supply distribution and communication.

The effort reminds me of the Disaster Relief Trials, an event that demonstrated the value of cargo bikes to take care of our community during emergencies.

It’s amazing and inspiring to see these principles being put to use in a real-life disaster.

For more on the Ashland Bike Brigade, see the story from Jefferson Public Radio.

“amazing and inspiring” isn’t how I would describe people ignoring evacuation orders and going into areas they’re explicitly told not to go into. Seems like a good way to further spread thin fire and law enforcement resources.

Some people are stranded. A passenger train last operated in 1956 in Medford, Oregon.

There are many US cities far larger than Medford without passenger rail service (Nashville TN for example). But Medford still has commercial intercity bus and air service, and taxis to nearby Amtrak stations in Eugene, Klamath Falls, & Dunsmuir.

Sounds to me like those first responder resources are already ignoring the people in the evacuated zones; otherwise these stranded people wouldn’t be dying of thirst.

Don’t make the perfect into the enemy of the good.

Have you ever had to work in an evacuation zone? It’s hard enough as it is without a large group of unprepared people coming in. And your bike will not outrun flames.

Talent is right by major roads as well as water sources and is within walking distance of a significant city, yet somehow people there are stranded and desperate for water. However, a bunch of people on heavily loaded bikes can enter but people who live there can’t.

If there is a real need for supplies and water, this is why trucks exist — a single person can haul far more than a swarm of bikes. But it would still make much more sense to evacuate the people. And has been mentioned, any such operation really should be coordinated with the authorities.

I’m purely asking out of curiosity, but are there places nearby that are safer than where they are right now? My understanding from the air quality maps is that evacuation may not be much of an option on much of the west coast. If their community has already burned down, and the whole West Coast is more polluted than Delhi India, how is it any worse just staying put?

The air is only one problem and as big a deal as people make of it, I think it’s relatively low on the list of things for most people to worry about. Obviously it’s very serious for the vulnerable, but a healthy person’s lungs will return to normal after awhile.

Some places are truly destroyed and major supply routes are disrupted. In addition, there might be no services for a long way. We don’t know exactly what’s left, but no gas or groceries for literally 100 miles is a real possibility. Then there’s utilities, communications, etc.

But yes, your basic point being that there’s not really anywhere to evacuate to is basically correct. Going east makes no sense — there’s nothing out there and what little there is would be very quickly overwhelmed by not many people who would then find themselves stranded in high desert. The few viable roads north and south don’t have the capacity for everyone to be on them and basically only go parallel to the problem which gets you little to nothing.

What this experience has taught me is there is no reasonable way to do a large scale evacuation of the West Coast. If this were truly a life or death situation, my gut reaction would be to make for the ocean, set up camp, and fish off the coast as practically no one can do that without dino juice so there’d actually be something to eat.

That is in fact what they did during the Australia wildfires last year, evacuate residents down to the beaches where the air was still filthy, but slightly less so, and they could gradually move residents by sea to safer harbors.

Here in hurricane country (the Deep South) the authorities have a network of designated inland temporary shelters for the millions of evacuees every year. It still rains, but flooding is less of an issue for the inland industrial cities, and there are plenty of hotels for those who can afford them, and schools for those who can’t. But I agree, the geography out here is completely different than it is for the West Coast, with narrow heavily-populated valleys surrounded by high mountains, and everything east being desert. I can’t imagine moving 2 million people out of Portland to Bend, or 4 million out of Seattle to Pasco and Ellensburg. Not enough water, nor housing, nor much of anything. And your coasts can barely support the small communities that are already there.

I applaud their efforts but I hope they are coordinating with the authorities to have a backup plan if one of them needs help, or if one of the people they are contacting needs further assistance.

The Internet has made everyone an expert. Fascinating…
Can’t wait ‘til Gore’s creation can create a forest overnight.

Spreading long debunked misinformation (Gore & the Internet Claims) is a hallmark of modern internet users. Congratulations in doing your part!

The Oregon fire Marshall was fired for doing something like this.
Apparently people in charge know how stupid and dangerous this is…..

That fire marshall prolly crawled back to its cage he purchased with our tax money. Thousands in southern Oregon no longer have a cage to lock themselves up in to cry in place. Lotsa douchebag details become meaningless to those people with winter approaching. THOUSANDS outside cuz someone pitched a butt out a window on SB I5.

He also had responsibility to lead the fire response. That’s dereliction of duty, on top of the offense of entering a closed zone. Hopefully no one died because he failed to do his job while looking for friends in a closed zone.