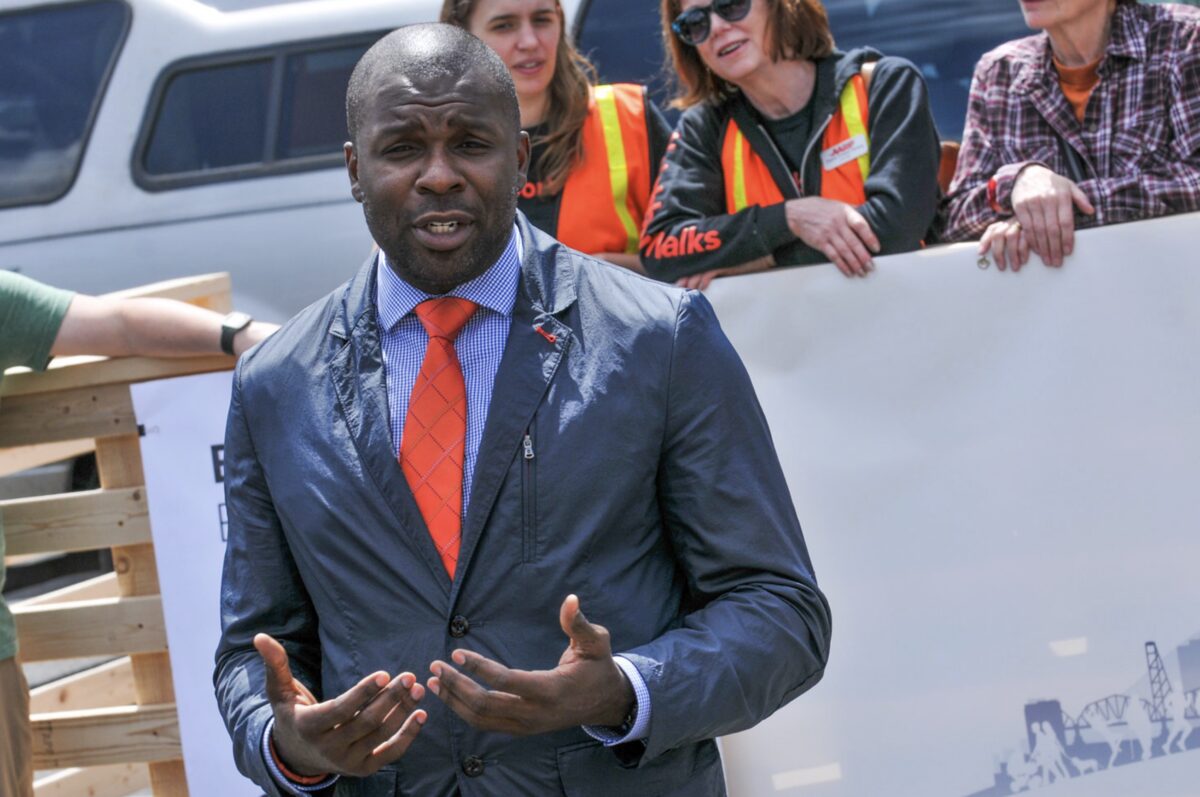 Maurice Henderson at a PBOT event in 2016.
(Photo: Jonathan Maus/BikePortland)

Henderson served as assistant director at the Portland Bureau of Transportation for 19 months between April 2015 and October of 2016. He then spent a similar amount of time as chief of staff to Portland Mayor Ted Wheeler before being hired as Chief Operating Officer by TriMet in July 2018 where he worked for eight months. Henderson has been director of government partnerships at micromobility company Bird since February 2019.

Henderson, who currently lives in Bend, will take over as Deschutes County representative in place of Martin Callery whose term is expiring.

Henderson told Willamette Week he looks forward to working with the OTC, “Including initiatives such as the bridge replacement in Douglas County, the Rose Quarter discussions, and policy work related to congestion pricing.”

We haven’t heard Henderson’s views on the controversial I-5 Rose Quarter project, but the man he’s replacing is a strong supporter of it. Callery, a former official with the Port of Coos Bay, has expressed concern about how calls for more environmental review have delayed the project. In December 2019 Callery said, “I can live with a few months delay, but I don’t want it to last much longer.” And back in April he dismissed calls for an environmental impact statement, saying, “We need to move this project forward.”

Henderson will be thrust into the Rose Quarter project debate as ODOT struggles to hold it together. The City of Portland has walked away from the project, nearly every regional elected has expressed opposition to it, and ODOT’s own citizen’s advisory committee — which after months of meetings still hasn’t been given a clear charter of how they can influence the project — has already seen one resignation and is likely to have more.

The Oregon Senate will consider Henderson’s nomination on September 24th and if approved, he’s slated to begin his term October 1st.

The Governor wouldn’t have picked him unless he had a strong pro-petroleum bias.

He’s a smart creative guy who’s worked for TriMet, Portland, and now Bird – and serves on my board, where we are focused on electrifying transportation. So I’d say that’s the opposite of a ‘pro petroleum bias.’ I’m really looking forward to his leadership on the OTC.

Do you Maus (or anyone reading) have insight as to what he accomplished during his time as a City of Portland civil servant (or what his views are regarding active transportation/transit/etc)?

Totally fascinated by that jacket! A technical sport coat?

Really exciting news. Maurice is a smart creative guy who’s worked for TriMet, Portland, and now Bird – and serves on my board, where we are focused on electrifying transportation. So he knows transit, active transportation, electric and smart mobility… he’ll be a great addition.

Excuse me, but who are you? and what makes you think electrification is better? Without conservation, electricity just means CO2 emmissions, dead salmon and radioactive wast.

Electric vehicles are much more efficient than gas or deisel vehicles, and so help reduce CO2 emissions and local air and noise pollution.