UPDATE, 6/7: Portland have found the driver. 30-year-old Steven Killeen was arrested and booked into the Multnomah County Detention Center for Manslaughter (second degree), Reckless Driving, and Fail to Perform Duties of a Driver.

Last night around 11:00 pm someone driving a mini-van hit a person who was walking at the intersection of Southwest Barbur Boulevard and Southwest Capitol Hill Road. The driver did not stop after the collision and the person they struck died at the scene. 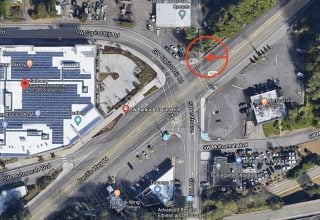 The Portland Police Bureau Major Crash Team says the driver was in a newer grey Dodge Caravan that will likely have damage along the passenger side. If you saw what happened or have any information about this crash, please contact PPB Officer Chris Johnson at chris.johnson@portlandoregon.gov or call the non-emergency line at 503-823-3333.

According to a visit of the scene by southwest Portland transportation advocate Eric Wilhelm this morning, the collision appears to have happened near a guardrail on the northwest corner of the intersection. Wilhelm pointed out to us via email that the bike lane ends just before this intersection. “I frequently see people walking in the road there,” he shared.

The intersection with Capitol Hill Road is adjacent to a large Safeway grocery store and the speed limit at this location is 35 mph. North of Capitol Hill Road, the Barbur cross-section has two standard lanes and a center turn lane. SW Trails, a nonprofit that advocates for safe walking in the area has two established routes that cross Barbur at this intersection (you can see their wayfinding signage in the lead photo).

Long-time southwest transportation advocate Marianne Fitzgerald expressed frustration that this intersection is still so unsafe. She cited planned changes that have been put on hold because of TriMet’s SW Corridor project (this intersection would be a MAX station if the project ever gets built). “So for decades, little has been done to make the street safer for people and now we have to wait at least a decade more before anything is done,” she wrote in an email this morning.

This area was also one of seven “focus areas” in the Barbur Concept Plan, adopted by the City of Portland in 2013. “This short stretch of Barbur functions as a main street, anchored by Safeway and flanked by office, retail and residential uses,” the plan reads. “The grocery store serves nearby housing for families, where children can safely walk to the three nearby schools.” The plan also mentions “particular challenges to pedestrian and bicycle safety” in this area due to, “antiquated roadway design.” 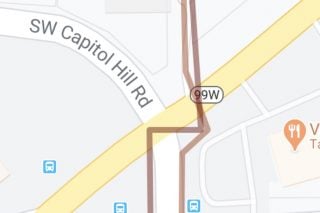 Less than three hours after this fatal hit-and-run, the PPB responded to another serious crash on Barbur just 0.4 miles away. According to KATU News, a drunk person rammed their car into building and utility pole. The woman, who was seen vomiting after the crash, was arrested and charged with drunk driving.

SW Barbur is owned and managed by the Oregon Department of Transportation as State Route 99 West. It became an “orphan highway” after Interstate 5 was built. ODOT and the Portland Bureau of Transportation are currently negotiating a jurisdictional transfer of Barbur and several other highways in the region. Metro is facilitating the discussions and plans to have a strategy developed by this fall.

ODOT’s Barbur Blvd has killed many people over the years and advocates have pushed hard for safety updates including road diets and other traffic calming measures for just as long. But ODOT manages the road as if it were an interstate freeway and has consistently dragged their feet when it comes to significant changes.

“Barbur is an urban highway designed for cars, not people,” Fitzgerald said. “It’s time to turn these highways into streets for people and make it safer to walk and bike.”

This is the 17th person to die while using Portland roads so far this year. According to our tracker, five of them were walking and 11 were vulnerable road users. At this date in 2019 we had 22 traffic deaths.

I’ve asked the PPB for more information on last night’s crash and will update this post throughout the day.

This is part of my daily commute. As mentioned, there is NO delineated space for anyone who isn’t in a car. There is an unstriped shoulder that allows for a wider than needed driving lane, or a very tight squeeze for a car and anyone else. After every death of a vulnerable road user on Barbur, I’ll be emailing ODOT staff Shelli Romero (shelli.romero@odot.state.or.us), Zachary Horowitz (zachary.horowitz@odot.state.or.us), and Krisen Stallman (kristen.stallman@odot.state.or.us) who are apparently involved with this region. There’s a lot going on in the world right now, and clearly other matters are rightfully a higher priority for most people, but the person who died last night mattered to someone. Don’t let ODOT forget.

ODOT’s explanation for why they can’t/won’t do anything with Barbur in the short term is that the SW Corridor Plan is going to be GREAT! so just wait at least a decade. A decade equals roughly 20 more, at least potentially, preventable deaths.

Why on Earth is Barbur still two car travel lanes in each direction here, with parking? If drivers want a high-speed, high-capacity route then they have I-5 that’s literally right next to it, and there’s plenty of parking on side streets. The cross-section should be one car travel lane in each direction, protected bike lanes, wide sidewalks, and (depending on how much room is left) a dedicated bus lane and/or a center turn lane.

I made a quick and dirty cross-section at https://streetmix.net/-/1181737 to show how it could easily work (I estimated the right-of-way from Google Maps).

There is no parking on Barbur near this intersection.
https://goo.gl/maps/4mMQJ6BHCqLLdB8s9

Any sections of SW Barbur that does not have sidewalks and legal bike lanes should be re-striped to one lane each direction to provide space for pedestrians and cyclists, at least until the road can be widened with proper sidewalks installed.

I bike through there every day as well (thankfully just to cross from 19th to get on Multnomah), and would echo Alan’s comments. The disappearing shoulder on both sides of this intersection is problematic for cyclists, and asking cyclists to merge safely into Barbur’s 40+ mph traffic is not a good solution.

As an aside: a couple months ago I arrived at this intersection to discover that someone had taken out the TriMet bus shelter that used to be in front of Tobacco Town. Clearly, the turn plus the speed limit of Barbur didn’t mix well.

Has the shelter been replaced ?

ODOT conducted the Barbur Road Safety Audit in 2015. The main improvement since 2015? “Restriped travel lanes to provide more consistent and slightly narrower travel lanes and add marked bike lanes.” (https://www.oregon.gov/odot/projects/pages/project-details.aspx?project=99WRSA) But there is no bike lane where the crash occurred.

The other proposal coming out of the RSA is ODOT’s upcoming “Barbur Crossroads Safety Project”. This will redirect motor vehicle traffic through West Portland Crossroads at SW Capitol Highway and Barbur to SW Taylors Ferry Road through a “jughandle” to make it safer for cars but less safe for people walking and biking in Crossroads where a number of pedestrians and bicyclists have already been seriously injured or killed, according to PBOT’s Vision Zero map. https://www.oregon.gov/odot/projects/pages/project-details.aspx?project=20438. Our neighborhood has asked ODOT to scrap the dangerous jughandle project and install red light/speed cameras instead, to actually address the root cause of the crashes in Crossroads.

Any news on who was killed? This intersection is directly 6 blocks north of where I live. I posted on Nextdoor and there seems to be no information.

What a terrible stretch of Barbur! When I ride through there towards Multnomah Village, I take the much longer and hillier route of Custer/Capitol Hill/Troy/28th just to avoid that bike lane gap.

The bike lanes on Barbur really suck. A few years ago I complained to ODOT about those square potholes that have never been repaired fully, as well as some other potholes. Someone threw some cold-patch in one of the potholes, and then I got a note from ODOT saying “We fixed your problem. Are you satisfied?” Clearly they don’t give a crap about the bike lanes.