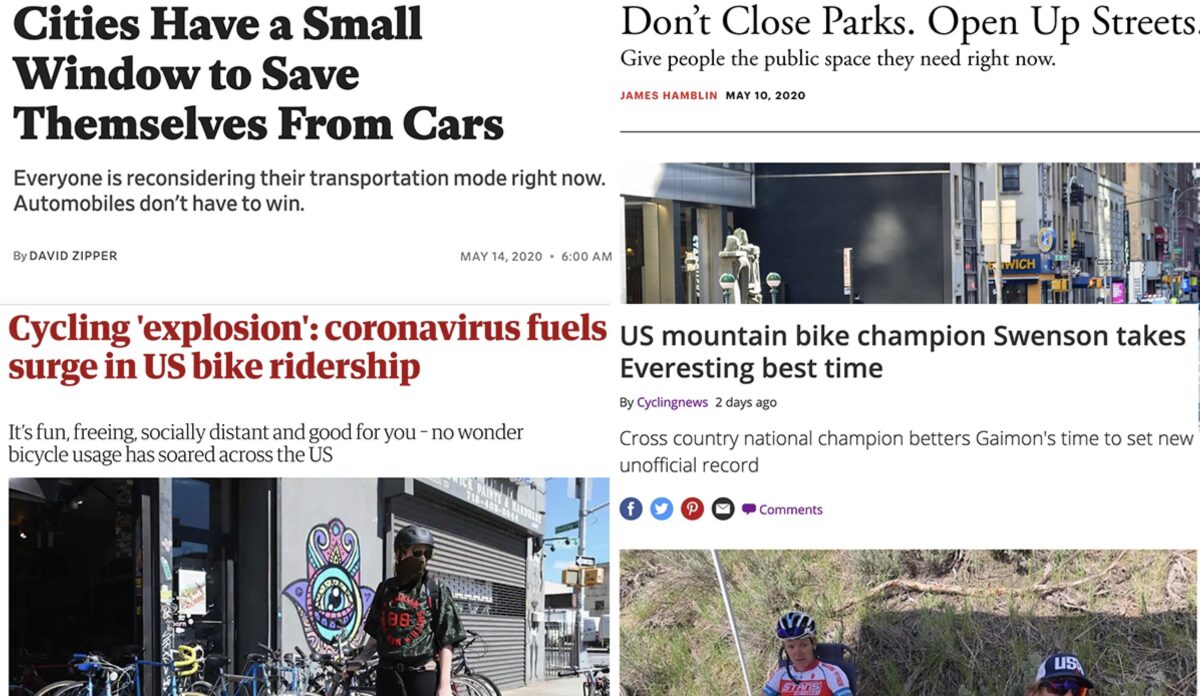 Boom time: “It’s fun, freeing, socially distant and good for you – no wonder bicycle usage has soared across the US,” says this good overview in The Guardian.

Streets are the new parks: What people in cities need for the foreseeable future is more space and streets have a lot of it that’s being wasted on one type of road user (car drivers). “Dynamite the asphalt, sod the land, plant trees and flowers, and do not look back,” says this provocative piece in The Atlantic.

Go beyond white, able-bodied males: This article in Forbes says if cars are to truly become guests in our cities, reformers must make sure that riders of bikes and scooters reflect the demographics of the entire community.

Biking in Europe: The Washington Post surveys how many major European cities are adapting to the pandemic era by giving bicycle riders more protected space.

E-bikes booming too: A bridge closure in Seattle is stoking a switch to e-bikes for many commuters.

Eat in the street: Bicycle riders could soon have another thing competing for street space as many cities (including Portland) begin to consider allowing cafes and restaurants to set up dining tables in traffic lanes. The Urbanist calls them “carfree streateries“.

The real threat: Hopefully this new research finally puts the nail in the coffin of the “distracted pedestrian” myth that’s survived for way too long already.

“Everesting” trend: The idea of Everesting, 29,029 feet in one haul on the same section of hill has been around for years; but with pro racers unable to compete they’ve latched onto it with a new fervor and records are being set left and right. The latest is 7 hours, 42 minutes by MTBer Keegan Swenson.

Keep them riding: “Cycling and scootering should be as straightforward as taking the subway,” says this NY Daily News story on the need for “micromobility highways” as cities open back up.

Does Portland need this?: Interesting and promising new transportation reform group called Better Streets Chicago seems to me like a nice mix of Better Block PDX and Bike Loud PDX.

Cars booming too: It’s not all good news as we’ve seen a growing number of reports that the auto industry is licking their chops for a car-buying boom and Americans are all too willing to oblige.

Choose your side: Will our cities become choked with more car users or be opened up with more bicycle and scooter users? The moment to dictate this future is “exceedingly rare” says this Slate writer, and “The stakes for cities could scarcely be higher.”

Tweets of the Week: Great mayors of great cities show us what mobility leadership looks like…

Paris
One reason so many Parisians are riding bikes these days is because their mayor Anne Hidalgo is an unabashed supporter and rider herself. When’s the last time a Portland City Hall denizen put out a public message while riding a bike? Modeling matters.

COVID-19 will fundamentally change the way we travel around our city.

That’s why today, @TfL and I are announcing our plans to make central London one of the largest car-free zones in any capital city in the world, increasing walking and cycling and improving our air quality.

Everest in day? That is insane. I needed a goal to focus on last week and decided to do Everest in 7 days, and that was difficult!

An epic mountain ride I can get (years ago, they used to have the Everest Challenge down near Bishop). But hill reps?

Sounds like something on a par with doing a 24 hr TT on a trainer for fun.

To each his own.

With regards to the “eat in the street” piece, I think that’s something we should implement ASAP, considering how much safer it is to be around people outside than inside right now. Mississippi Avenue, Alberta Street, 13th Avenue, 21st Avenue, Capitol Highway, and Division Street all seem like great choices to me that could be easily implemented.

I so want this for NE 28th! Glad to see so many of the businesses are behind it. I wonder how many of those have flipped (were against the original plan to remove parking, etc.)?

Interestingly, there were only a few businesses on this stretch of 28th—from Burnside to Glisan—that allegedly signed that petition. If it was legitimate, City State Diner, Staccato Gelato, and La Buca have all flipped. Most of them were on the other parts of 28th, though.

I think it is wishful thinking on the part of the auto industry that there will be a car boom anytime soon. The drop in auto sales has been tremendous the last two months and it had been on a steep downhill before that. With the record breaking low sales, the lots ( and fields) stuffed with new and used cars and the car auction market frozen it is doom and gloom for the manufacturers. I expect only one of the three U.S. auto companies to survive and an equal percentage to collapse worldwide. This will so devastate the supply chain that auto manufacturing will become much more expensive. Even used cars will not be much of a relief as a lack of spare parts may prematurely doom many of them to the junkyard ( Saturn anyone). Though the social distancing aspect may make many desire increased driving , the economics of the situation may put a damper in it. I expect the number of people who can afford to take part in the use of a personal automobile 5 years from now to be 50% of what it is now.

In the first 10 days of April, sales of new and used vehicles plunged by 50 percent. But in the final 10 days of last month, sales were off by just 20 percent, the company’s chief executive

Sales off by 20 percent is still really bad. I have a feeling the auto industry is going to take a big hit.

Chris I
Reply to  Bikeninja

I had the same thought. Some people will be buying cars, but many won’t, because we are going to hit 25% unemployment very soon. People will be defaulting on 5 to 7 year auto loans left and right, flooding the market with lightly-used vehicles.

Good analysis in the ScienceDirect link, showing that being a “distracted pedestrian” is a relatively minor cause of pedestrian fatalities, in the 10-20% range based on what we can extrapolate from existing studies, and lower than driver behaviors like speeding.

But it sure is a persistent myth! Why make things easier and safer for pedestrians, if you can tell yourself it’s usually their fault when they get hit! It’s sad that this idea is so widespread, but its persistence over the last few years has certainly given me some deeper (and disturbing) insights into human behavior.

RE Distracted Driving Study… from the abstract:

>>> In this study, we survey transportation practitioners to gauge how concerned they are about distracted walking, assess whether windshield bias and professional training influence concern, and determine whether concern influences preferred policy solutions for reducing pedestrian deaths. <<<

In other words, the "study" is a survey of professionals. As such, I don't think it really puts any nails in any coffins, or much of anything else.

My personal opinion is that "distracted walking" is not often the primary cause of someone getting hit by a car (at least in Portland), but I'm sure it happens. I have no data to support my view.

Tomorrow evening there’s a city Pedestrian Advisory Committee meeting via Zoom https://content.govdelivery.com/accounts/ORPORTLAND/bulletins/28b3a36. You could contact that committee, ask for their expert opinion, then publish the results as a study.

Can’t get hit by a car if there are no cars!

I’m being hyperbolic but when infrastructure and culture put people in the path of kinetic energy bombs it seems ridiculous for anyone to blame the individual.

I totally agree about the methods, I think social scientists should admit that the research is not helpful if they don’t have sound methods.

It probably doesn’t make sense to blame any party in a blanket manner. Since each set of circumstances is different, you’d probably need to look at the particulars to know how to assess responsibility.

The Rad PowerBikes van pulled up to my neighbors’ here in West Seattle (on the isolated side of the closed bridge) delivering a pair of eBikes – the fellow help set them up and gave them the necessary tutorials, it was quite impressive service.

I was cycling back the other day with a growler fill from a pub I definitely still want to be in business when this is over and I saw a family riding the other direction down the main drag of W. Sea and wondered how’s this tension going to play out: motorists sick of having to be careful about all these cyclists in their roads and cyclists unwillingness to go back to being treated like crap and cowering on back roads. It’s going to be interesting.