Mark your calendars for candidate forums on climate and transportation

“We want to give voters with a strong interest in transportation an opportunity to learn more about the top candidates and reach their own conclusions.”
— Jillian Detweiler, The Street Trust

Portland’s political season is shaping up to be one of the most consequential and competitive in history. Two events coming next month will help you figure out who’s worth voting for.

With four of five seats up for grabs (including mayor), there are at least 40 candidates vying for seats on Portland City Council alone.

On March 8th, Sunrise Movement PDX, 350 PDX, and Harriet Tubman Middle School Environmental Club are hosting a mayoral debate centered on climate change and environmental justice. “Many of the youth organizers that brought 20,000 people out into the streets of Portland to strike for climate justice are at it again,” reads the event description. 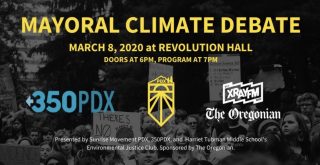 Signed up to participate (so far) are incumbent Mayor Ted Wheeler and challengers Ozzie Gonzalez, Sarah Iannarone, and Teressa Raiford.

While it’s likely to come up at the climate debate, two days later, transportation policy will be the main course at a separate event in southeast Portland. Four local organizations — Bike Loud PDX, The Street Trust, Young Professionals in Transportation and Women’s Transportation Seminar — have teamed up to host a transportation forum on March 10th at Clinton Street Theater. 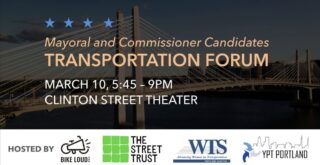 The Street Trust Executive Director Jillian Detweiler told me earlier today they’ve got several goals for the event. “We want candidates to think about transportation issues and priorities. We want to get candidates on the record about how they will advance goals to increase walking, biking and transit. We also want to give voters with a strong interest in transportation an opportunity to learn more about the top candidates and reach their own conclusions.”

So far 12 candidates have been confirmed their attendance.

Sarah Iannarone and Teressa Raiford will represent the mayoral race. Detweiler says incumbent Mayor Ted Wheeler has expressed interest but has not yet committed. Update (2/27): Wheeler will also be there.

For more on these events see the BP Calendar here and here.

“Wheeler has expressed interest but has not yet committed”

What else is new?

He’s neither a leader nor an adept administrator. Heck, he’s not even got any vision.

He’s too busy trying to not offend anyone that he doesn’t get anything done.

You could say he’s a Middle Of The Road kinda guy.

Wheeler and Eudaly must be voted OUT!

Yawn
Candidates are vying for the position of most environmental in an agency with almost no influence over outcomes. Perhaps winners can influence local issues a blip, but climate change? Our candidates are self flattering to think they will move the bar.

The State legislature abandoned governance rather than address the issue. ODOT has NO corporate position on environmental stewardship (look for it!). It is easy to assume our Statewide Transportation Agency wishes citizens would look elsewhere for statewide policy.

Leadership in this state is laughable

Unfortunately the leadership at the Federal level is anything but laughable from the past (and current) half-dozen presidents and the divided congresses. And most states are no better than Oregon either on their paper policies or on actually implementing them. So really, it’s up to cities to fix public policy and enforcement in the USA – not a pleasant picture.

At the tail end of the Obama administration, I represented both my community and to a greater extent North Carolina at a USDOT workshop in DC. The USDOT wanted to put out a publication on how to do transportation advocacy at the local level, a basic how-to similar to a “Transportation Advocacy for Dummies” manual. Most people who attended were from nearby states like Virginia & Maryland, often paid staff, consultants, and elected officials, but there were a few other volunteers like myself. Anyway, they had a draft they wanted our feedback on. There was a particular chapter on funding, badly scaled, that accurately showed that the Federal funding portion for transportation was relatively minor in most communities unless they were building subways, airports or light rail, and the Federal portion had been shrinking in real terms (inflation) for decades. The state portion was bigger but also shrinking, as gas taxes have not kept up with inflation. But far and away the biggest funding source, and a rapidly growing one at that, was local tax dollars. So if you plan on saving the world, don’t bother asking the feds to fund it, or even your state really, but more likely it’s your city that’s going to pay for it.

The final publication was, of course, deeply flawed and useless, but it was a fun exercise.

I have been impressed by candidate Keith Wilson, who’s campaigning for seat 4 against Eudaly and Adams. For one thing, he owns a trucking company and is trying to switch his whole fleet to electric trucks…and wants to do the same thing for city vehicles. http://www.keithforportland.com/climate_emergency_subpage

Traffic safety / Vision Zero is also one of his priorities. His company has implemented safety systems that sharply reduced unsafe driving behavior and distracted driving, and he wants to apply those systems more broadly (though I have to say, the details of how that happens are the big question). http://www.keithforportland.com/public_safety_subpage

I really like the idea of having someone with a transportation background running PBOT.

Is either forum going to be streamed or archived?

And I suppose all of these people are getting there on bikes, or on a bus? LMAO