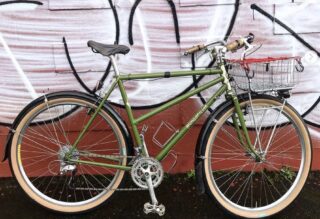 With all the doom-and-gloom news about local retail lately, I’m eager to share good news from the bike shop front.

Golden Pliers on North Skidmore and Interstate has been a bright spot ever since they opened two years ago. For a very small shop where the owners still put in most of the hours, Golden Pliers seems to have found a workable niche.

This week they announced news that will help expand that niche a bit: Golden Pliers is now an authorized Rivendell Bicycle Works (adding to their current offerings from Crust, All-City, Velo Orange, and Surly) dealer. Rivendell is a small but mighty brand from northern California that has retained its culture and values through many changes in the bike industry. Their steel bikes offer ride qualities and designs you can’t find from any other company, are wonderful for unpaved adventures and urban rambling, and they have a devoted Portland fan base. Their previous Portland area dealer, Rivelo, passed along the business when owner John Bennett decided to retire late last year. 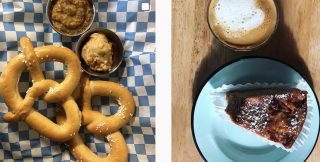 A sampling of their expanded offerings.

And that’s not the only way Golden Pliers is growing. Co-owner Becky Newman (who’s also the woman behind Makeshifter Canvas Works) told us this week they’ve added an espresso machine to their already awesome cafe and bar. There’s also new food choices that include house-made breakfast burritos, sandwiches from Snackrilege Vegan Foods, and bar snacks like soft pretzels.

Newman says the continued tweaking of their offerings comes, “In hopes of finding that special sauce that keeps a bike shop afloat in this day and age.” 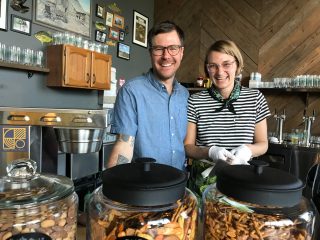 Kevin and Becky shortly after opening in 2018.
(Photo © J. Maus/BikePortland)

On that note, I asked Newman how she and partner Kevin Purcell are making it work. “To be honest, Golden Pliers is more surviving than thriving. Our business is less than two years old, and every day we are still learning, growing, struggling, adapting,” she said. Newman acknowledged her shop may have an outsized reputation due to their cool aesthetic and presence on social media, “But at the end of the day, followers and hype are not money. And businesses need money to stay open.”

Leaning on Purcell’s 20 years of bike shop experience, Golden Pliers has stayed small and service-focused by design. And because they’re not beholden to agreements with huge brands, they can carry the type and quantity of products they want. When customers walk into the shop they’ll find four of Newman and Purcell’s favorite, tried-and-tested helmets, not several dozen. “We think our tailored, slimmed-down selection of products is appealing, comforting even, to certain people,” Newman says.

“We understand folks will always want to buy stuff for cheap online. Our goal is not to fight that inevitable tide, but to fill in the gaps…”
— Becky Newman, co-owner

People use the web so much now, Golden Pliers offers an antidote to online shopping fatigue. Add in their expertise as riders themselves and the shop offers something of a guide service into great cycling experiences. “We understand folks will always want to buy stuff for cheap online. Our goal is not to fight that inevitable tide, but to fill in the gaps when people want more service, more care, a more human touch,” Newman says.

That human touch is one of the reasons why Newman and Purcell have put a priority into making their shop and cafe feel welcoming to all types of people. Golden Pliers has become one of the most popular spots to meet pre and post-ride. They also host social rides and community events, all aimed at building trust and friendships a few people at a time. “Whether or not this investment pays off in the long run remains to be seen,” says Newman. “But for now, we’d much rather lead a group ride to the blueberry patch than spend our time or money on traditional marketing efforts.”

Portland is wildly fortunate to have shops like this and people like Becky (Blecky?) and Kevin (Klebby). Mix tape 3 is nearly due.

So glad Golden Pliers is my neighborhood shop. Think I’ll stop by tomorrow!

Cute place, nice folks. I hope they can sustain themselves at the pricepoint most of their goods and services inhabit.

I have had amazing service from this shop- highly recommended!

Yep, that’s the story every small business owner knows well. I certainly do. But this is my neighborhood shop, and I had a good experience, so I think they’ll be around for a while longer.

Hunqapillar?
Who comes up with this sort of thing?

Kevin is a maestro of a mechanic. Best mechanic in town!

Kevin and Becky (and their small crew) rule!

9watts
Hunqapillar? Who comes up with this sort of thing?Recommended 0

Love to stop into Golden Pliers when I’m in town – not just for the great company of the staff or beer, but also because they have tons of great small handmade items in the shop that are useful, unique, and reasonably priced. Crud caps, small Makeshifter bags and bandannas, coffee mugs, and t-shirts all come to mind right away, but they have cool art prints and stickers and stuff like that too! Highly recommend taking a close look at all their offerings in the shop next time you stop in – it’s a great place to get small gifts and useful items for your daily life and commutes!!

love this spot, and I’ve always gotten a kick out of the name 😉 Good news! nice to hear with all the shops closing recently.