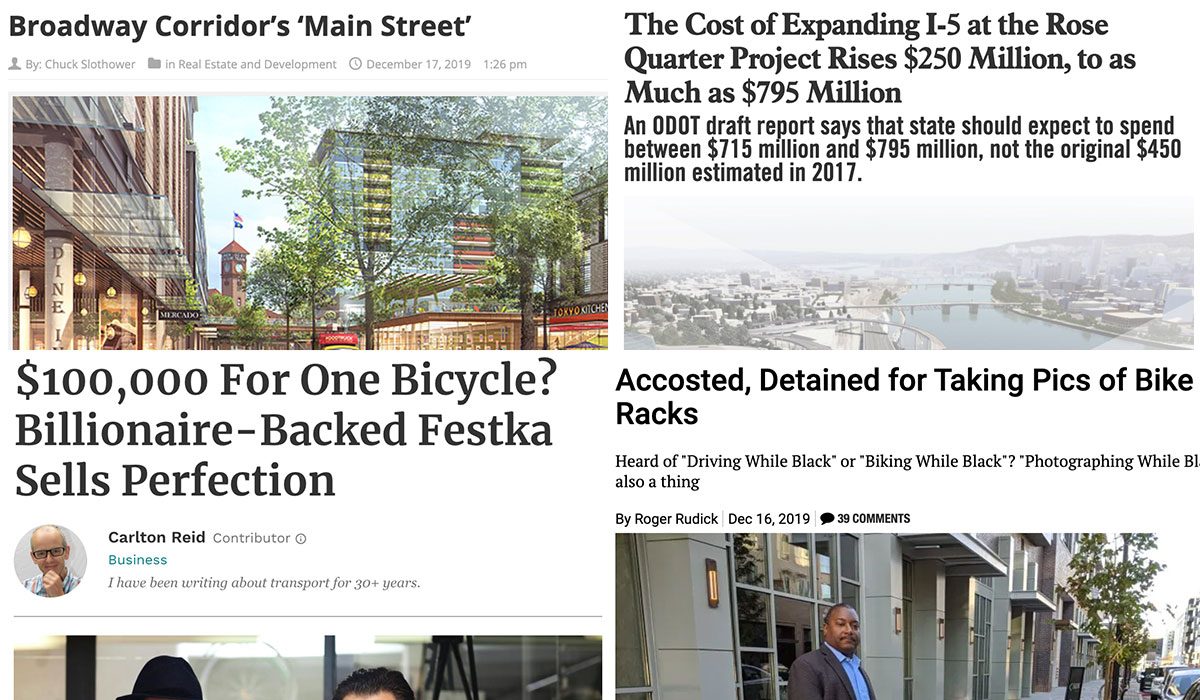 Just FYI, it’ll be pretty quiet on all the BikePortland channels for a while as I take more time to hang with family, organize some things, and (try to) take a mental break until after the New Year. I’ve got some guest articles planned and not sure what else.

For now, here are the most noteworthy stories we came across in the past seven days. Don’t miss the “Local Focus” section below the jump!

Bike share’s decade: The past decade has been nothing short of a triumph for bike sharing systems across the U.S., so says reporters from Curbed and Forbes.

Superbikes: Next time you complain that your local handmade bicycle maker is too expensive, think of Festka, a company that makes “perfect” bicycles that can cost up to $100,000.

Finding a way: With a massive transport strike that has shut down their rail and bus system, Parisians are taking to bikes (and scooters and their own two feet) in even greater numbers.

Taking pictures while black: A San Francisco man was harassed and detained by police for taking pictures of bike racks (something I’ve managed to do for many years without ever even being questioned). Guess why.

There’s been a ton of great transportation reporting from local media this week. Here’s some of the best:

Visibility for visibility: The issue of intersection daylighting finally got the attention it deserves when the Willamette Week called parking cars all the way up to corners, “one of the greatest obstacles to safer streets.”

Future of NW Johnson: Daily Journal of Commerce reports on how NW Johnson will be transformed into a vibrant main street once the Broadway Corridor project is completed.

Freeway expansion costs balloon: A forthcoming report on costs for ODOT’s I-5 Rose Quarter project says the price will skyrocket to $795 million.

Unsafe design: Lawyers for a man who was struck while crossing the I-5 on-ramp on N Greeley Avenue won a $350,000 settlement from the City of Portland.

Our climate policy *is* phony. No doubt about it. But when you have developers deep in the pocket of the mayor, how else can it play out? Wheeler can jet to Sapporo or Copenhagen and whine about the climate all he wants, but he is the ultimate phony.

middle of the road guy
Reply to  Toby Keith

Let’s not forget Chloe Eudaly also flew there, just so she can come back and scold us about our own behaviors.

MTW
Reply to  middle of the road guy

Not sure why people are so hard on Eudaly. She is the commissioner in charge of PBOT and she’s running point on the Rose Lane project. She’s not just scolding us (whatever that means); she’s using her position of power to advocate for and implement action items which help to reduce our carbon footprint.

Wheeler is a clown show, sure, but Eudaly is actually doing something.

He doesn’t believe in climate change.

In that case either he or his critique is phony.

I was wondering where the BP opinion police were. Merry Christmas fellas!

If you had responded there would have been no need to speculate.

Chris I
Reply to  Toby Keith

I’ll take that as confirmation that your initial comment was completely disingenuous.

Toby Keith
Reply to  Chris I

Take it anyway you like. I don’t give a rats ass what either of you think.

What I am trying to understand is what you would have Wheeler do instead of what you consider ‘phony.’ Complaining is easy. How about some constructive criticism?

You know we’ve come a long way as a society when we are more concerned about what our climate will be in 80 years from now and how we’ll live, than we are by the potential of being annihilated in the next 5 minutes by nuclear war, which was our chief fear not so long ago.

Excellent round up. Next up high speed e-cargo bike corridor from PDX to……Sandy… high speed bike corridor to downtown? Something ….like that. We need a green transport solution to the airport. Dream awesome! Something for our brilliant bike building community to thrive on! We want the real deal futuristic e-bike commercial corridor. All the cool kids will ride e-share bikes from the airport .. and the scooters.

I would like to hear from others who have biked to and from the airport (PDX). I’ve never biked there to catch a flight – too afraid I’ll get a flat and miss my flight. But I’ve biked from the airport to home several times – it’s the most wonderful way to decompress after five or ten hours sitting on an airplane.

Things that are challenging about cycling from the airport:
– Having to take the elevator upstairs b/c the regular path from the terminal is blocked during the D/E wing expansion;
– Crossing Columbia Blvd! I usually avoid the 205 path and ride S on 82nd (wide shoulders near the airport, after crossing six lanes at the light to reach the right shoulder), right on Aldermartin, and then one very short but harrowing sprint on Columbia before turning L onto Cully, with a few industrial blocks before you enter the cycling paradise that is residential NE Portland.

Things are that great about cycling from the airport:
– The fact that you can do it at all! PDX has the wonderful cycling path all the way to the terminal and then a place to lock your bike when you get there. And having a button to push so you can cross Airport Way – any acknowledgement that bikes belong is most welcome.
– All of the things that are great about cycling, which you already know about.

I’ve ridden to the airport to meet friends and also to catch a flight. I definitely suggest doing a dry run if you are attempting a tight schedule. It’s not a soothing experience.

The MAX route is indirect and takes longer than it should but it’s safer and more predictable. They don’t throw construction in front of the train the way they do bikes.

Have biked to PDX many times. Not the most pleasant atmosphere to ride, but no worse than most of East Portland (high speed, high capacity roads). Free to park right at the East end of terminal and feels like a relatively safe place to leave a bike for days. Have also biked to MAX red line and left bike at airport MAX stop. Way cheaper than a cab. Either way it’s fantastic to jump on a bike after being stuffed in a can for hours. We are fortunate to have this option.

Even easier is taking a Biketown to the Max station; no worry about keeping your ride secure while you’re gone, and you have total flexibility upon your return.

I’ve biked to the airport (PDX) a couple times to catch flights (and take my bike with me), but the last time was over 5 years ago. Night-time bike connections after MAX service has ended at 11:45 pm totally sucked, virtually no lighting on 82nd and cars moved way too fast. Aside from the frustration of dealing with different airlines and getting a bike box for an East Coast trip, it was also unpleasant disassembling and reassembling your bike around the outside bike racks, with all the diesel and cigarette fumes. Have things improved?

I forgot that the bike-assembly area is right next to the smoking area – what a horror show! It hasn’t changed, unfortunately.

My standard reply to anyone worried about getting flats is: I’ve been using Kevlar tires for about 10 years and never get flat tires. I’ve used mostly Specialized, but right now I’m trying Schwalbe ones because I’m not trying to pay any Specialized lawyers. The Schwalbe tires haven’t failed me yet. 😀

@Jonathan Maus – Reread the article behind ‘Taking Pictures While Black’. He was detained and harassed by private security guards.

If anything, the police were saviors in this case:
“I called OPD dispatch, and a great dispatcher stayed on the line with me until OPD arrived. After what seemed like an eternity but was probably 15 minutes, two OPD officers who came and very professionally resolved the issue with the security guards and myself.”

Walker got an apology and the security firm was fired, so it sounds like the building manager took the issue seriously and acted appropriately. Hopefully it won’t happen again.

Both are only hi-tech gaslighting, no hard math or science.

Rose Quarter Freeway Widening Palooza: If it gets built, it will cost a billion dollars.

Taking pictures while black: A San Francisco man was harassed and detained by police for taking pictures of bike racks (something I’ve managed to do for many years without ever even being questioned). Guess why.

OK I’ll guess! Because the security guards were not deputized officers, had no training, and did not speak English let alone understand California or US law?

Also this man was not detained by the police. That’s simply factually inaccurate.

When it comes to Vision Zero’s three e’s — education, enforcement and engineering — the enforcement portion is often pointed to as lacking.