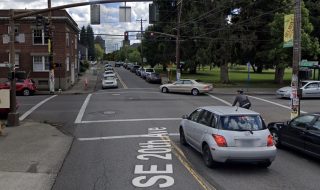 Did you see a crash at SE 20th and Belmont Monday morning? If so, the Portland Police Bureau would like to hear from you.

The PPB are on the hunt for the driver of a small red Toyota that hit and injured a woman who was crossing Belmont around 11:19 am yesterday. See PPB statement below:

A pedestrian and her dog are recovering after being struck by a vehicle in the Buckman neighborhood. Portland Police is now looking for the driver involved.

The crash happened at 11:19 a.m. on Monday, December 2, 2019. East Precinct officers responded to a hospital where the victim, an adult female, was being treated. She reported being struck by the car while crossing Southeast Belmont Street at Southeast 20th Avenue. The suspect vehicle made a left turn, struck her and her dog, and was last seen Eastbound Belmont Street. The officer went to the scene and obtained video surveillance.

The video (see screenshots) suggests the vehicle was a red Toyota Matrix or similar. If anyone has information about this case, please e-mail Officer Richard Storm at Richard.Storm@portlandoregon.gov and reference case number 19-413106.

Lots of small red Toyotas around, but good eye and worth PPB checking out (you read the comments PPB?). I wonder if they can get access to original imagery with unblurred plate #? If true the dog friendly sticker on the back glass would be egregious. https://goo.gl/maps/zsfw7MAGCFzV7Esj6

Funny. The can get a clear image of a dime on the moon, but only a blurry image of a license plate a few hundred feet away.

That’s a maroon Buick Encore, not the red Toyota Matrix that hit the lady.

I don’t think any Encore variant has a 3rd window behind the C Pillar like the car in the above photo.

I think you may have mixed up what I was saying:
a Matrix hit the lady. The google photo was an Encore.

Yep, you’re correct about that. My mistake.

Cross post this on Jalopnik if you want a positive ID on the car!

Nah, count the windows and spokes.

A little over a year ago someone died trying to cross SE Belmont only ten blocks away.

Despite the city’s supposed committment to “vision zero”, it has steadfastly refused to install proven and inexpensive infrastructure that dramatically reduces risk of pedestrian death or serious injury (raised crosswalks and speed bumps) on arterials/connectors.

Claes Tingvall (director of traffic safety for the Swedish National Road Administration): “Stockholm is filled with speed bumps and raised cross walks. There are signs everywhere, and I mean everywhere, alerting motorists where walkers and cyclists might be. It works. Cars go slow.”

I contacted PBOT about this very issue since I live a block from this intersection and constantly witness dangerous driving. I was told that both SE Belmont and SE Morrison streets are “emergency routes” and therefore are not eligible for traffic calming. Nevermind that SE Morrison, in particular, starts from a dead-end in this neighborhood and would never be used by emergency vehicles in the area where I requested traffic calming measures (between SE 20th and SE 26th). I don’t have a radar gun, but I regularly see people driving what I would estimate to be double the speed limit.

Would you like to borrow my radar gun? It is helpful to have photos of speeding cars, with a radar gun, to get speed enforcement.

4k waterproof solar powered wireless security cameras are only a couple hundred dollars now. Prices have come way down. For a reasonable sum they could be put at some big intersections, running on a loop, and in combination with existing cams could almost eliminate unsolved hit and run. I just read today about a town in Oregon that is putting them in. In some cities >90% of hit and runs go unsolved. People can drive recklessly because they know there is only a very small chance they will get caught if they hit someone.

Check out the lane position of the red car in that image. Are those east bound cyclists or the pedestrian/dog group?

Could also be a Pontiac Vibe (same production line as Toyota Matrix). Also an outside chance it could be a Mazda 5.