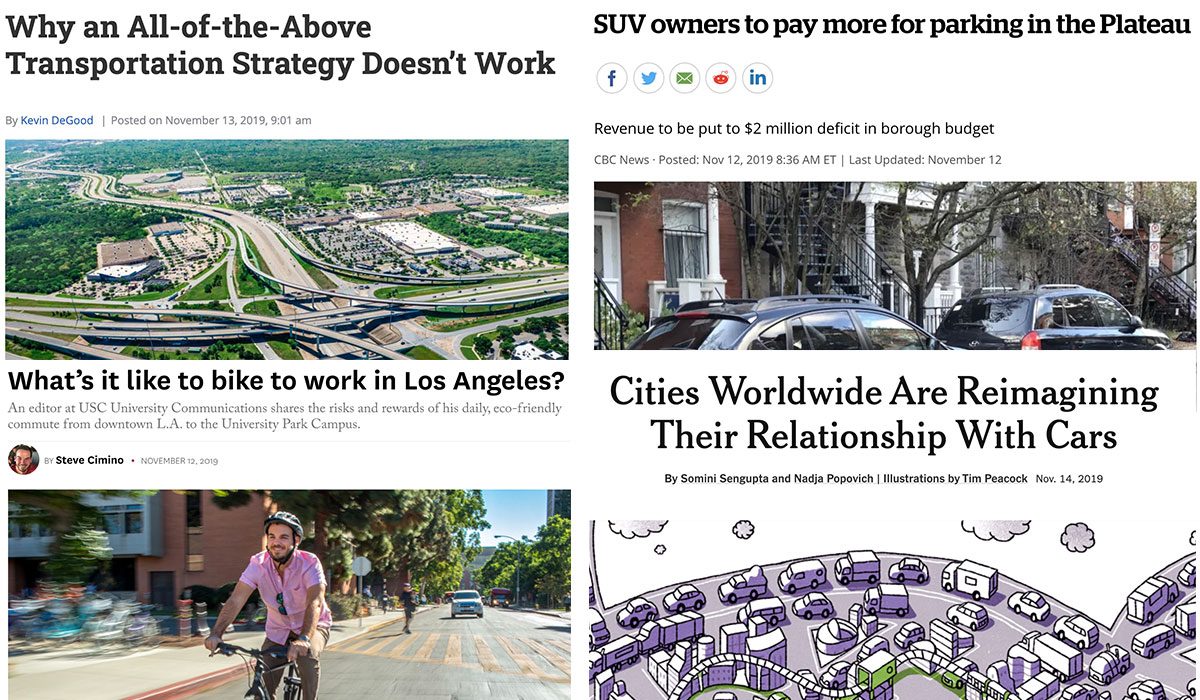 The drumbeat of a future without so many damn cars everywhere continues this week, and I couldn’t be happier about it. Now let’s turn these headlines into real changes on the ground.

Here are the most noteworthy items we came across in the past seven days….

This isn’t hard: Saying “The ecological transition is a priority,” the leader of a Montreal neighborhood will charge SUV owners more to park their gas-guzzlers.

San Diego has more guts than we do?: Oh look, another city (in the U.S. this time!) is moving forward with plans to ban driving on their most iconic and popular downtown street in a bid to increase real estate values and boost foot traffic.

Language matters: I am giddy that respectable researchers have backed up (with science!) my deeply held belief and standard practice of being very careful and thoughtful with word choice when reporting on traffic crashes.

A vote against incrementalism: This well-researched piece from the Center for American Progress makes an excellent case for why simply going for small “wins” for biking and walking on projects where driving capacity is significantly improved, is actually a very big loss.

Time to break up: Another week, another national headline about how cities are finally ending their toxic love affair with driving.

Parking pays for transit: When people say “free transit” is an impossible pipe dream, send them a link to this op-ed that says if we priced auto parking appropriately it could offset the loss in transit fares.

Traffic violence takes stage: I noticed that Families for Safe Streets has launched an effort to get “End Traffic Violence” into the national presidential campaign conversation. Then I noticed candidate Elizabeth Warren tweeted about it. 👏🏽👏🏽

AV dystopia: Jalopnik reports on a study that used chauffeurs to mimic an autonomous vehicle future and the results were horrific.

Future of e-road bikes: VeloNews dives into the nascent market of high-end, high-performance e-road bikes, ponders who might buy them, and juxtaposes them with more functional micro-mobility options.

Dynamic leadership is key: The San Francisco Municipal Transportation Agency board has chosen “high-profile outsider” Jeffrey Tumlin to lead the agency. There’s a good interview with Tumlin on the SFMTA blog.

Kids know best: A neighborhood in Germany is much safer because they let kids design a roundabout, crosswalks, and other roadway features.

Race and advocacy: This solid piece about the value and need for non-white advocacy leadership is based in Chicago but is relevant to a similar dynamic here in Portland.

Biking in Los Angeles: L.A. is far from a biking paradise, but even with its driver-dominated streets and suffocating car culture, the benefits and appeal of cycling come through for this USC student.

Trump builds bike lanes: The US DOT released its third batch of BUILD grant (formerly named TIGER) award winners. Several of the projects include bikeways, including the sole project from Oregon — a $15.5 million project that will add driving lanes and bike lanes to a road in Medford.

#tbt Portland, circa 1993-97, to a group of lost boys and the Neverland they carved out delivering other people's shit by bike. Portland is a small town, and ours was a small group, and we were all broken in some way. (1) pic.twitter.com/7nP2rs8aMm

Chauffeurs aren’t a great representation of the AV model because it represents people buying transportation more as a good rather than a service. You don’t send *the* car on a long round trip from home, you send *a* car from point to point. Not saying the conclusions are wrong, just saying that it doesn’t work that way.

The article itself pointed out, repeatedly, why the findings of the study were probably wrong.

North America consistently prefers to own rather than rent, borrow, or share. As a culture, we also create much of our identity by the vehicle we use to get about town. Unless ride sharing becomes just as stylish and convenient as the car waiting or use in your driveway, people will be sending out *the* car. I would rather it be different, but I doubt it will be.

I suspect this will change for most of us; for example, I’ll take a Lyft* rather than hire a chauffeur.

*Actually, I’ll do neither, and ride my bike.

Most AVs will be owned, and dedicated solely to their owners, at least initially. Sharing an AV as part of a service only makes sense if you are living a low-car lifestyle, and very few people in the US are doing that.

I think the study results are exactly what we will see in the next few decades. AVs will absolutely increase traffic congestion. They are going to encourage more driving through additional trips, and increasingly longer SOV commutes.

bikeninja
Reply to  Chris I

When they initially appear AV’s will be very expensive to buy and expensive to maintain. While software and computing power may be getting cheaper, sensors and accurate servo controls have not been. Many of the critical items on an AV are the same things used on industrial robots and automated equipment and they have not been getting cheaper and there is no reason to think that they will. Due to liability exposure the maintenance of these systems will have to be frequent and meticulous. If a pedestrian is killed because someone forgot to clean the lens on the camera, or the lidar is misaligned liability will be total, no excuse for human error will exist. This will push the cost of owning and operating an AV in to territory similar to that of owning and operating a helicopter. They will only make economic sense as fleet vehicles running 24/7 that are being maintained by a staff of professionals. The recent disasters as Boeing show how difficult it is build fault tolerant systems and how there was the economic desire to cut corners on sensors and training, even on a plane costing hundreds of millions.

Speaking of charging more for SUVs to park, I always thought that the best way to price residential on-street parking permits would be based on the length of the vehicle. If you have a longer vehicle, then you are occupying more of the curb space and you should pay more.

On a different note, I think we should avoid using phrases like “high-end” to describe expensive products because it implies that somehow wasting money on yet more useless stuff is going to lead to an increase in living standards for the average American. In reality, as Mr. Money Mustache has so masterfully demonstrated, living standards can increase in tandem with highly restricted spending habits.

9watts
Reply to  Bike Round

It is always fun (and a cheap thrill) to pillory SUVs, but this is 2019: we should be pillorying the auto (of all varieties) not splitting hairs over an extra 200lbs or foot in length, or whatever distinguishes SUVs in this era from their more humdrum relatives.

Getting our panties in a wad over SUvs harks back to an era in which fuel economy was seen as a meaningful strategy, a viable energy policy. Bit in the face of rapid climate change efficiency has nothing to offer and is a distraction, an excuse not to do what needs doing.. Time to reframe this.

Trump Builds Bike Lanes & A Vote Against Incrementalism: I’m a bit perplexed that the League of American Bicyclists would applaud a list of 55 “bike and ped”projects that have 95% of their funding being spent on adding car capacity, with bike lanes as afterthoughts on roadways where traffic is moving so fast that they really shouldn’t have them.

Chris I
Reply to  David Hampsten

Exactly. The real story here is that 0% of the funding is going to bike/ped specific projects. Most of these bike lanes are basically gutters or breakdown shoulders.

To be even more technical (and cynical) about it, the standard curbside bike lanes channel car traffic into their lanes on the strongest part of the roadbed and reduce use of the edge and gutter, typically the weakest and most expensive part of the roadway. It also get car drivers to drive closer to the speed limit, often reducing the crash rate and severity of car versus car crashes . From a traffic and civil engineering perspective, it’s a “win-win”.

Jeffrey Tumlin did some consulting for TriMet in 2018. He spoke to the TriMet board in November of that year. It’s a great window into his views on the role of transit in urban mobility. He starts talking about 1 hour in. https://www.youtube.com/watch?v=0hegeAyc2yQ&list=PLDbAeheAt5jYcKffqfQqsyZ_kIcFwFYqC