The Monday Roundup: Ibex is back, AOC on parking reform, and more 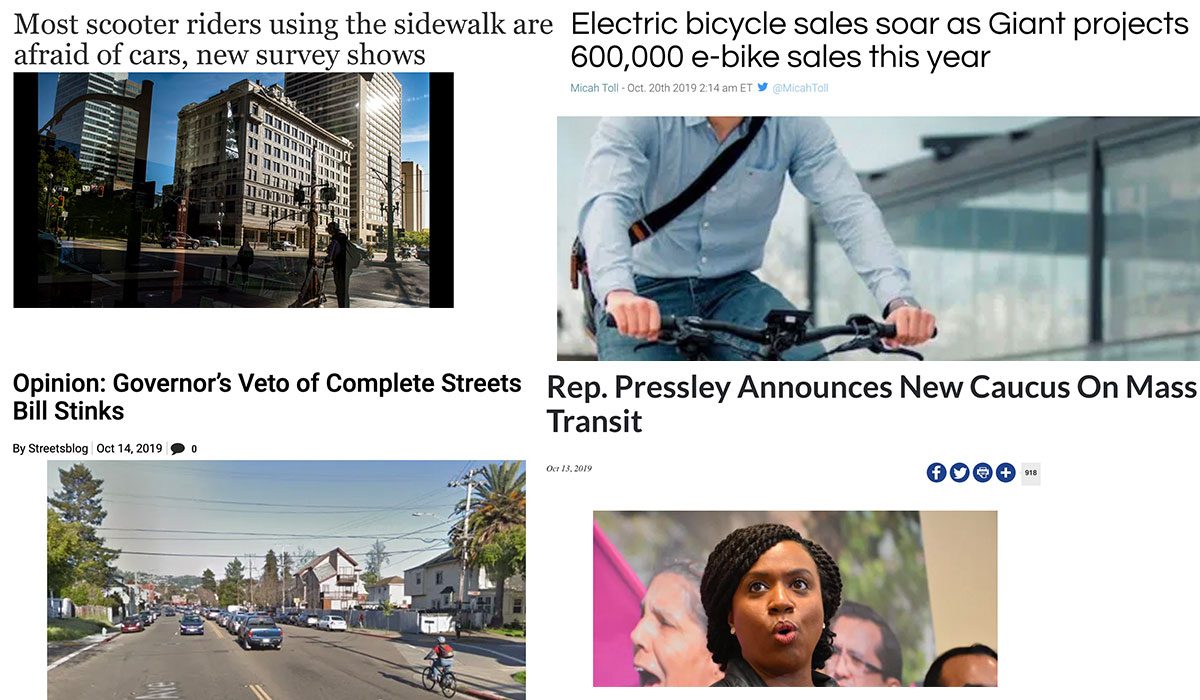 *Sponsored: Dreaming of the perfect bike? Look no further than Eugene-based Co-Motion Cycles.

Quick programming note: You may notice from the links below and other content we share, that I’m making a conscious decision to go beyond just bicycles on BikePortland. That’s something I’ve always done to some degree, but I want to do it even more in the future. We’ll see how it shakes out.

On that note, here are the most noteworthy items we came across in the past seven days…

Wool fans rejoice: It’s that time of year when you can really appreciate the news that beloved wool apparel brand Ibex is set to relaunch later this month.

DOT gonna DOT: Californians are scratching their heads over a veto of a complete streets bill by Governor Gavin Newsom that many see as a capitulation to an out-of-touch, automobile-oriented DOT (sound familiar?).

How women travel: Los Angeles transit agency Metro became the first in the country to release a detailed report about the travel habits of their female customers.

Don’t blame them: A survey by scooter operator Lime found that the main reason its users ride on sidewalks is because they are too afraid to share the road with car and truck users.

Pricing roads is NBD: Brookings shares why we shouldn’t treat congestion pricing differently than any other part of our lives where we pay a premium for faster service.

E-bikes rising: Sales of bikes with batteries continues to soar. This story includes the tidbit that every category of bicycle sales — except gravel and e-bike — is in decline.

Transit on the Hill: Massachusetts Rep. Ayanna Pressley has formed a new congressional caucus that will focus on mass transit. No word yet whether any members of the Oregon delegation will be a part of it.

AOC and parking reform: Sightline shares the news that influential Congresswoman Alexandria Ocasio-Cortez has introduced a housing plan dubbed, “A Just Society – A Place to Prosper” that would withhold transportation funding from cities that have minimum parking requirements.

Steal this idea PDX: In an effort to discourage driving, San Francisco International Airport is considering a new policy that would give transit riders a golden ticket through security lines.

Traffic enforcement history: A fascinating look at how the “chaos” of cars in cities, and the difficulty of getting their users to obey basic laws, has changed very little in the past century.

Tweets of the Week:

The Swiss Biophysicist and Nobel laureate Jacques Dubochet had been cycling to his lab at Lausanne university for the last 30 years. When they asked him he wanted from them for winning the Nobel prize, he replied: "a parking space for my bike!" pic.twitter.com/40yE3M5wZP

Monster truck with tinted windows and military flag bullying pedestrians who have the light on Chambers St., 8:15am. pic.twitter.com/7GphXMUCKr

I think it’s a great idea that you’re doing more transit and multi-modal talk about urban development and making good streets. If that’s what you’re referring to, I’m all for it. Bikes have a critical role in this process, but aren’t the only way to achieve good things.

… Except congestion pricing isn’t really like those other activities the author compares them to: lunch, subway, watching a movie, etc. For those activities *efficiency* makes a certain amount of sense, and maximising the number of sandwiches delivered per hour or movies watched per mile of fiber optic cable is all to the good.
But some of us aren’t happy figuring out how to maximize the number of cars that can be fit onto our roads per hour… We are hoping to *discourage* frivolous or discretionary driving. This is a different, and much more urgent, project than *efficiency*.

One person’s frivolous is another person’s necessary.

I think you misunderstand my point. We all drive way more than we would if gas cost four times what it does. We don’t carpool, trip chain, or skip it… But we could, and would.

RE transit priority at airports: Logan International in Boston implemented this a while ago (only for people arriving on specific buses, though): https://www.independent.co.uk/travel/news-and-advice/boston-airport-fast-track-security-bus-passengers-uber-lyft-fee-a8904671.html

Good luck to SFO with this, though, as public transit there is horrendous. Caltrain services the peninsula then you have to walk to BART, get a new ticket and ride there – but not directly… unless they were doing temporary construction, the last time I arrived I had to take one northbound BART train to catch a different southbound line to Millbrae station where I had to walk to Caltrain platform. Watched my southbound train pull out as I was purchasing ticket, then waited outside in wildfire-tainted smoggy air (worse than Beijing) for 45 minutes.

Saw something odd last time I flew out of Portland. I have Global Entry but my wife doesn’t; went to TSA-Precheck and the line was huge! Walked over to join her in the ‘normal’ line and we were the only ones in it. Twilight zone…

I have global entry, my partner doesn’t. Every time we’ve booked a flight together, they’ve gotten precheck as well. I have longer lines, but usually precheck moves faster as you don’t have to remove shoes and people that tend to get it, tend to be better prepared to move through the line quicker.

Amazon shipping to my house used to be ~3 days. Now it’s ~3 weeks. It’s like they are trying to get me to pay for Prime…

The monster truck tweet reminded me of something: Has anyone else noticed large black pickup trucks with tinted windows driving around Portland with no license plates? Without really looking for it, I’ve seen it a couple times in the last couple months and am wondering if there’s anything behind it.

They obviously need something to haul around their giant Y chromosome with.

If it’s that obvious, the cops never noticed it.

I’d wager the large black trucks w/o license plates are sovcits, and the police tend to not pull them over because pulling over sovcits is a problem in and of itself.

Streetsblog was reporting on Thursday that Blumenauer was one of 13 Democratic members of the caucus: https://mass.streetsblog.org/2019/10/17/rep-pressley-announces-new-future-of-transportation-congressional-caucus/

Only gentle ribbing on the article description this week, but I could have sworn an eBike was more than just a bike with a battery, like you know what exactly does the battery power? Sounds like fear of saying the M-word 😉 FWIW I carry two cylindrical bottles of electrolyte solution energy storage on my bicycles as well, but I just can’t help myself just drinking the stuff.

no fear of the word “motorized” here Jason. As a writer who types the same words all the time, I get bored and like to find new ways to describe things.

As a creative who works with writers, I can understand that. All in good-nature.

Shoal mobiles. They know who they are.

Ironically? I was just googling them yesterday…

This is Portland… it was probably ironically.

I did have an ironic wool shirt on.

Dreading the day a non-e-bike is just a heavy, klunky e-bike with the battery stripped off.

Replacing a car with an e-bike: fantastic.
Potentially fewer options for affordable and “fun”/useful ATP-bikes: bummer

There are 693 individuals in Portland with a basement full of steel bike frames. Somebody will hook you up.

Yeah, but how do I know the provenance of those frames?

Used to be that a “retro grouch” had to ride an old ’70s or ’80s Raleigh, Nishiki, Bridgestone, or some such. Now, I just need any old SFNM (Steel Frame, No Motor).

Ayanna Presley and Alexandrea Ocasio Cortez links on the same Monday Roundup? I love it! These are two of my favorite four Congressional Representatives.

It used to be relatively easy to steal E-bike batteries from E-bikes because all locks tended to be keyed the same. That was 10-odd years ago. Hope this major issue has been resolved.