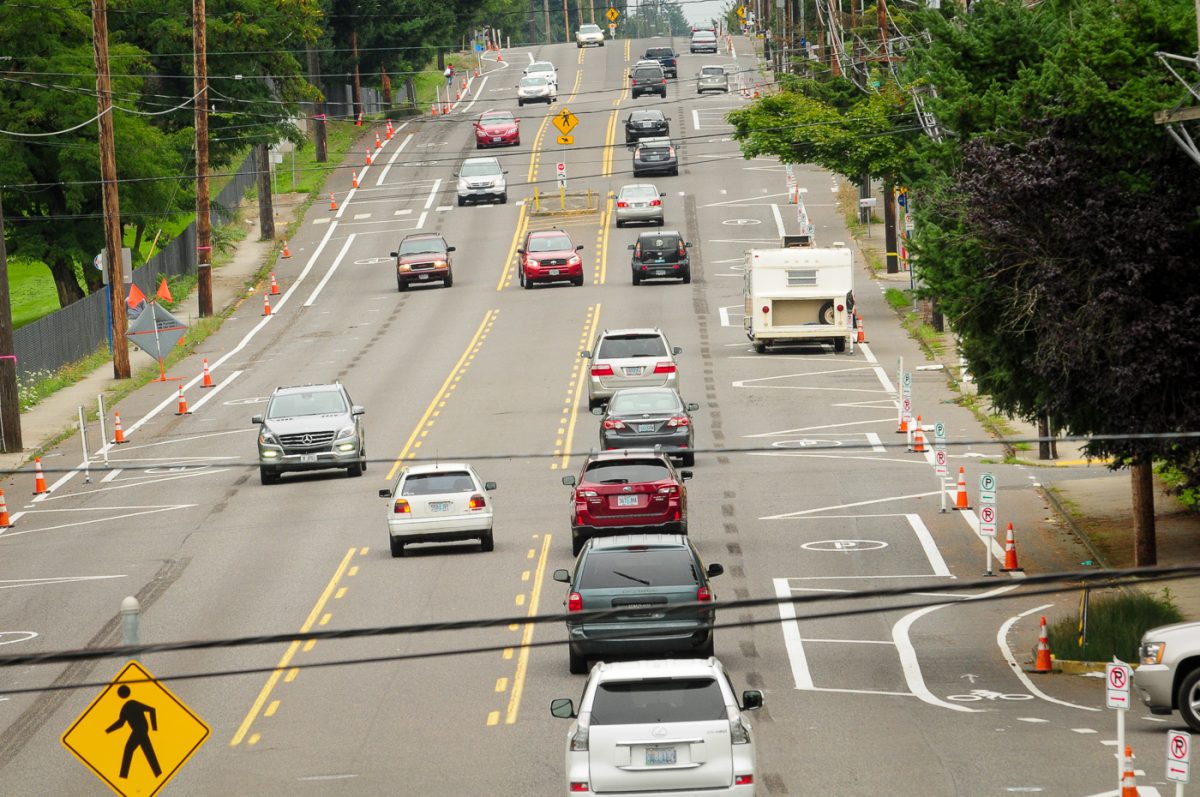 View looking east from bridge at Menlo Park school around NE 130th. Note where old striping has been ground off. The new auto parking lane is where the old outside lane used to be. That narrow strip against the curb is the new bike lane.
(Photos: J. Maus/BikePortland)

The latest project in the City of Portland’s systematic approach to redesigning arterials east of 82nd Avenue* is the East Glisan Street Update. The project focuses on the segment of Glisan between I-205 and the Gresham city limits (NE 162nd).

With a significant portion of the changes already on the ground and/or under construction, I decided to have a look at how it’s shaping up.

The Portland Bureau of Transportation (PBOT) prioritized about $400,000 worth of changes on Glisan because of its history of speeding and crashes — which should come as no surprise when you see that it’s previous design was essentially a neighborhood freeway. It had five driving lanes and unstriped shoulders on both sides where people could park their cars on the curb. It was wide and fast and terrible for everyone outside of a car.

*Existing conditions on Glisan make it clear why it needs to be updated.

In fact, it was terrible for people in cars too, judging from the jaw-dropping collection of photos on the PBOT project page showing the abundant damage to life and property that’s been caused in recent years by drivers. The images below were sent to PBOT from people who live in the project area on Glisan…

PBOT’s solution was to restrict car use to one lane in each direction and a center turn lane and add bike lanes in both directions. In addition to this new striping, they’re working on even more robust treatments near two elementary schools (Glenfair and Menlo Park). As of yesterday, striping is mostly complete from 122nd to 162nd. PBOT says they’ll be working through October to finish a new crossing and related changes in front of Menlo Park Elementary (at 128th).

From my relatively brief observations and experiences yesterday, the changes seem to be working well. It was quite nice (almost revelatory) to ride my bike in a lane with a generous buffer from auto users. As is always the case with projects that dramatically alter how a street is used, I expect people to behave a bit erratically and have some anger or sadness about the changes. I am also not surprised when a local media outlet exploits these feelings to broadcast biased and sensationalized coverage that aims to do nothing other than stoke flames of hate among neighbors and distrust of government that are making it difficult for us to make progress on many challenging issues we face. But I digress…

Let’s take a closer look at the new striping shall we?

First, here’s a little video from a biking perspective… 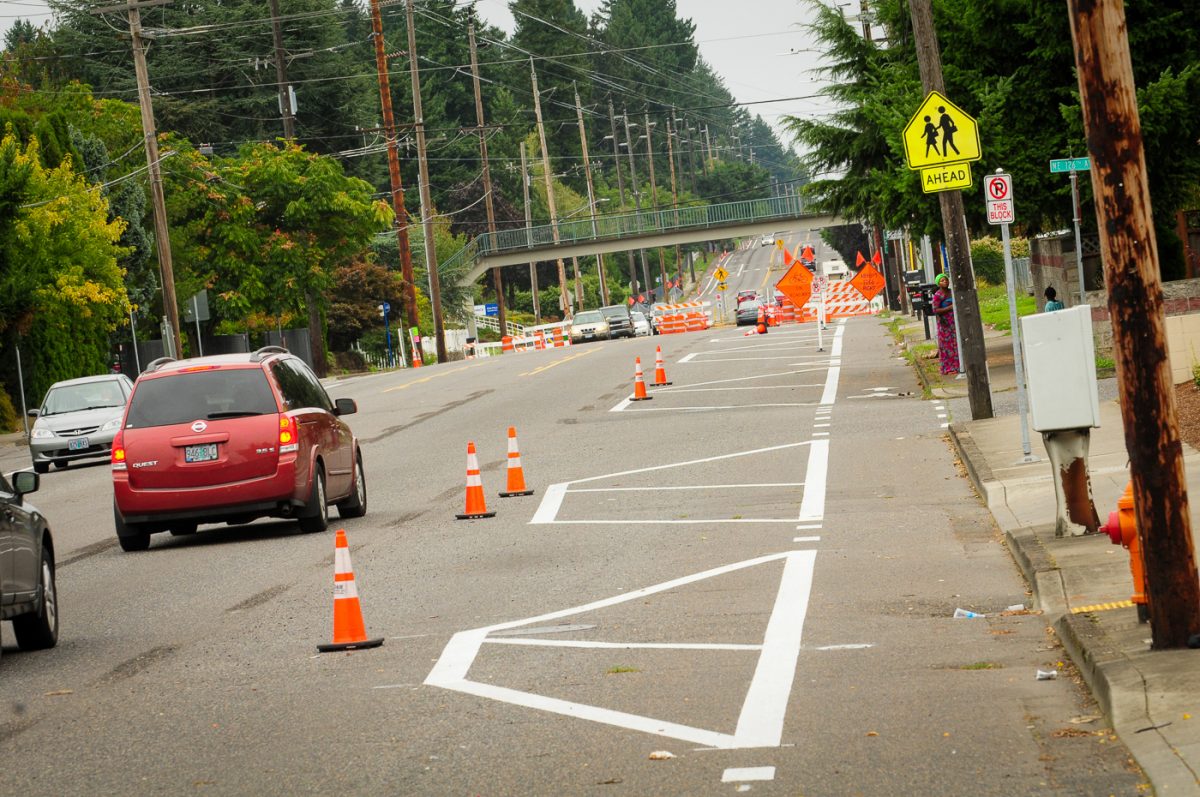 By now you should be familiar with how PBOT designs these parking-protected bike lanes. They shift the auto parking into the roadway and add it to buffer striping and plastic posts to create a protective buffer between auto users and bicycle users. It’s great to have space between modes; but I’d rather get the auto parking lane (which is often wider than the space for cycling) completely out of the picture. As you can see in images below, a five-foot wide bike lane against a curb can feel narrow when it’s hemmed in by parked cars, bioswales, storm drains and debris (that isn’t swept away as often as other lanes).

The most noteworthy part of this project is outside of Menlo Park Elementary between 128th and 130th. PBOT is constructing concrete curbs to protect bi-directional bike lanes and a floating transit stop. They’re also adding a flashing beacon crossing and lots of green and white paint. Below are shots of the new curbs and the view looking west from the footbridge in front of the school (a footbridge that will stand as a symbol of how much of a design failure Glisan was for decades). 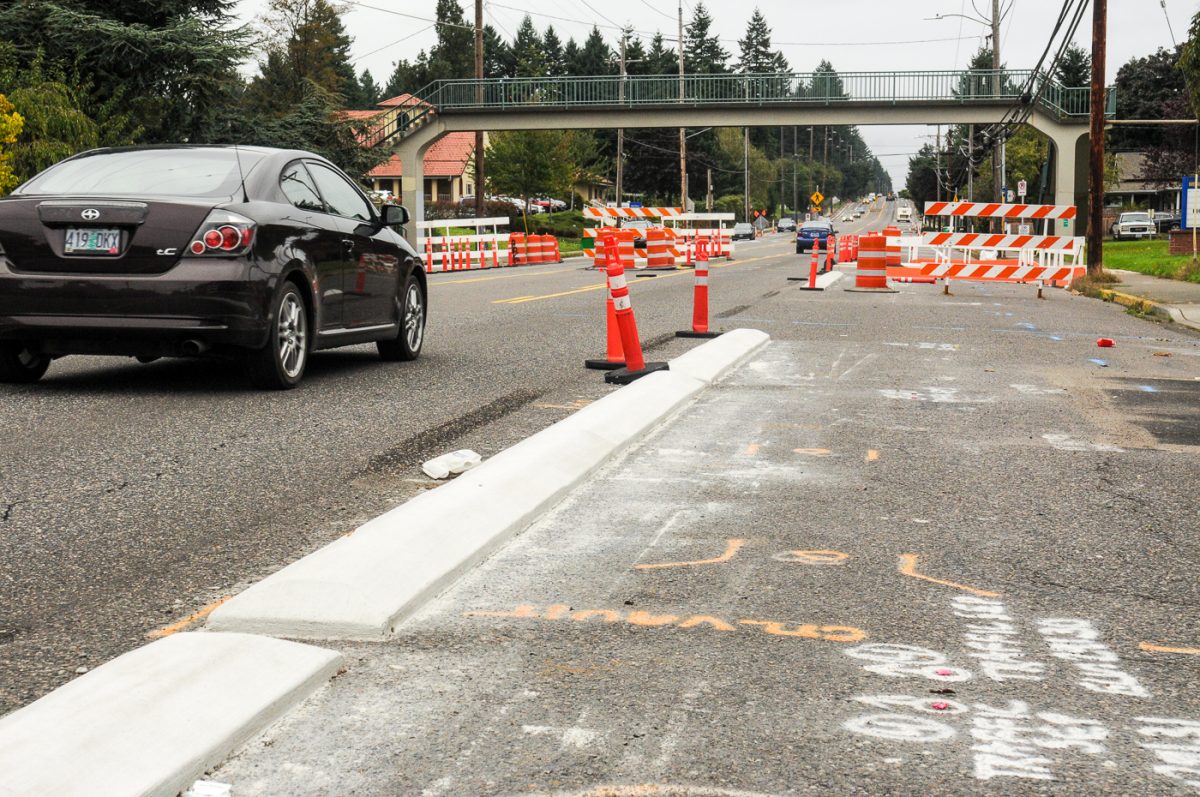 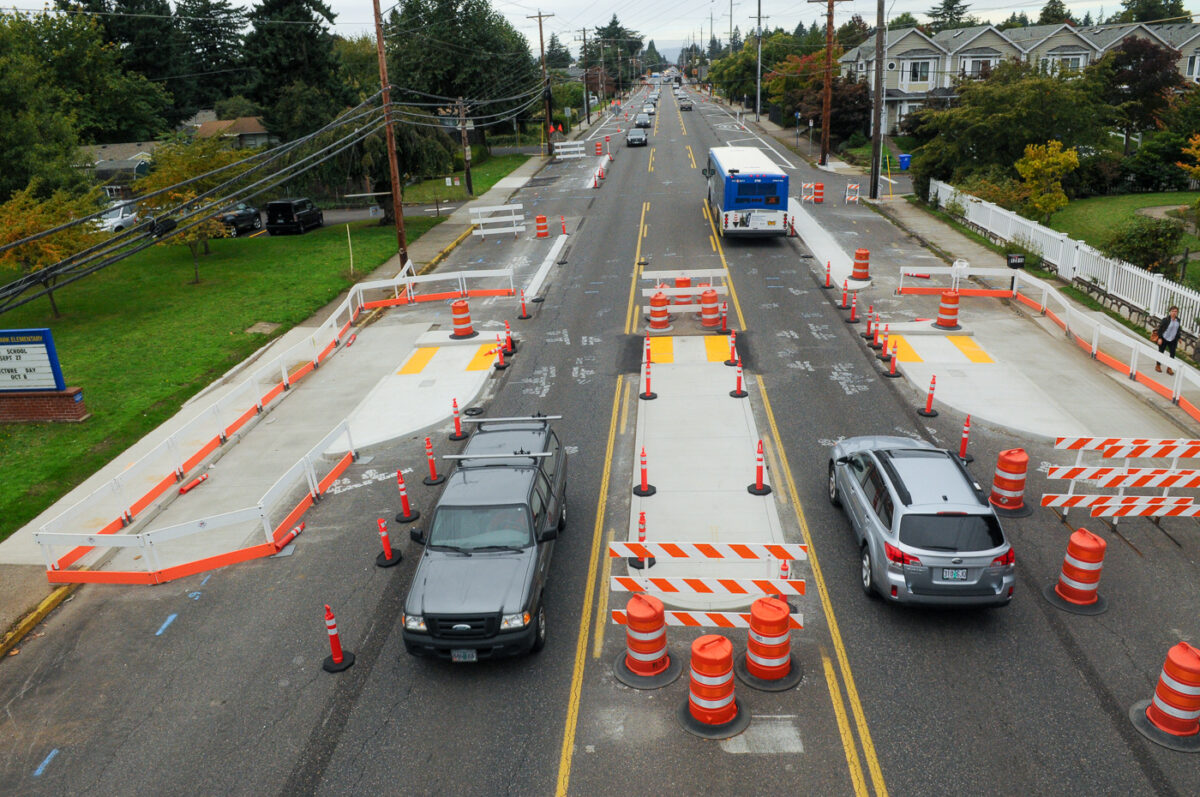 Overall, I think it’s wonderful how PBOT has created a safer and more fair allocation of space on this street. Especially given that it goes by two elementary schools where it’s so imperative for people to have an option other than driving. 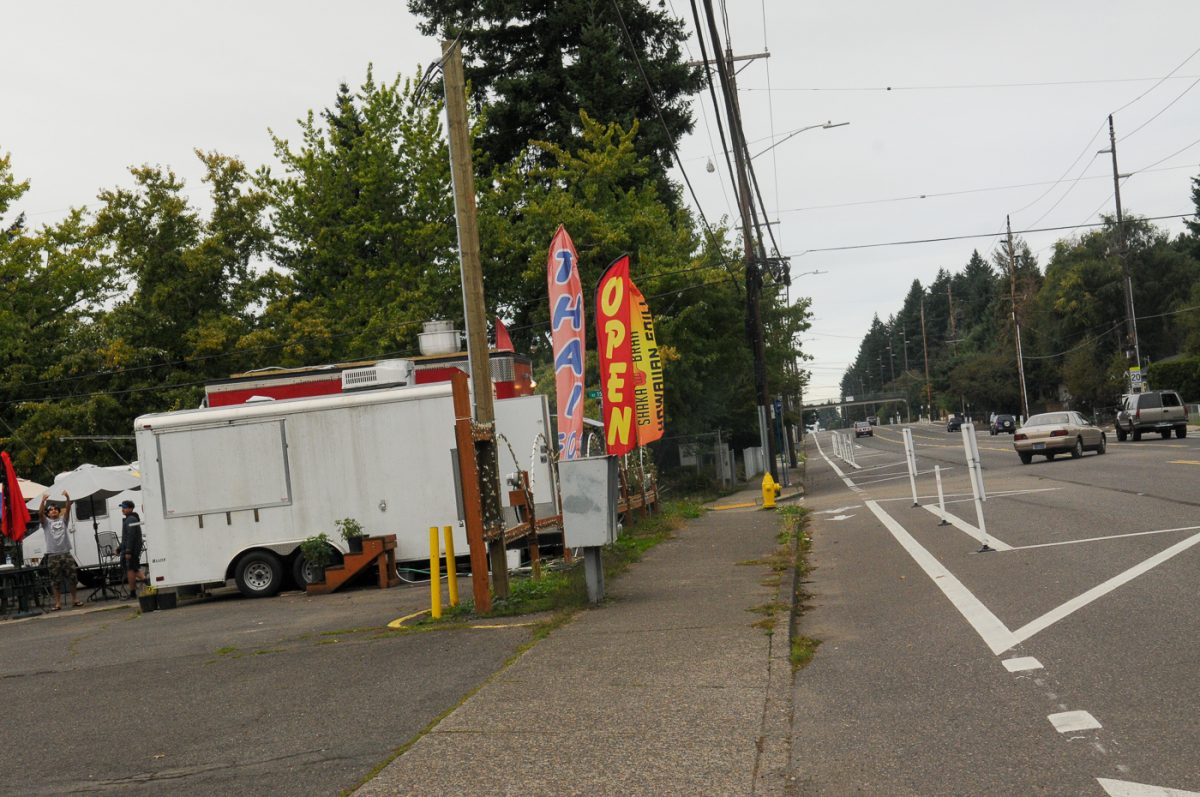 These food cart owners are stoked to no longer do business next to a dangerous freeway.

Toward the eastern end of the project is a small food cart pod. It’s very likely that a more humane street — one that’s now even more accessible by a cheap, traffic-proof, emissions-free vehicle — will lead to more business and less stress for everyone.

Speaking of stress, and the angry men interviewed in the KATU-TV piece, PBOT’s Hannah Schafer said they have no plans to back away from these changes. I asked her about the project yesterday. “We know some people are struggling with the changes; but we are committed to studying it and seeing what happens,” she said. “We have a responsibility for safety in our city and that’s our job as the transportation bureau: To make sure our streets are safe, so we’re going to do that to the best of our ability.”

One last thing: While we quibble with design specifics of these projects (102nd, Halsey-Weidler, N Rosa Parks, and so on), I firmly believe the positive impacts they’ll have on safety and biking in the long term will be profound. From bus-only lanes downtown to fewer driving lanes in east Portland, PBOT is slowly but surely whittling away the supremacy of the automobile.

Have you ridden Glisan before or after the changes? What are your impressions?