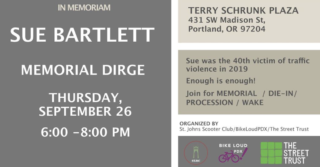 When Sue Bartlett was hit by the driver of an SUV on August 30th, she was on a gas-powered motorized scooter; but that fact hasn’t stopped active transportation advocates from organizing an event to remember her life.

“Light individual transportation (LIT) with low carbon footprints are the most vulnerable and exposed users of our public space,” reads the description of an event co-organized by The Street Trust, BikeLoudPDX and the St Johns Scooter Club.

Bartlett’s death is one of the 22 traffic fatalities on Portland streets this year where the victim was a vulnerable road user. That’s over half the total number of people (40) that have been killed so far.

Bartlett had deep connections to our community and her death has sent ripples through many different circles of Portlanders.

What’s also notable about the memorial event planned for tomorrow (9/26 at Terry Schrunk Plaza) is that it shows the increasing trend among biking and walking activists to build coalitions beyond the usual suspects. The idea of “LIT lanes” has emerged in the past year as we’ve seen a variety of vehicles seek refuge from car and truck users in what have traditionally been called bike lanes. While some people bemoan this influx of traffic in “their” bike lanes, many activists think if they embrace these new users it will strengthen their voice and give them newfound political and cultural power.

It’s also interesting that organizers have made an explicit connection between climate change and safe streets activism. “LIT action is climate action and climate action is LIT action.” That’s yet another way biking and walking advocates are looking to strengthen their hand as the urgency for transportation reform grows with each passing week — and with each new fatality.

Learn more about the Sue Bartlett memorial on the BikePortland Calendar or on Facebook.

I would welcome them in the bike lane with me if they are not spewing out exhaust that exceeds standards for newer automobiles.

John/ Steve – yes, the PPB report stated it was a PGO Scooter (likely a 49 cc – 2 Stroke, per mfr.). So technically these vehicles – as a 2 stroke – do have much higher emissions and so should likely not be included in a green cities “toolbox” of promoted vehicles for LIT lanes. There are similar EV moped / vespa scooters with the same mobility opportunities that should be promoted…and they have a similar need (like cyclists) to be protected in LIT lanes from large SUVs / poor drivers, as in her tragic case.

“A study by European researchers has found that two-stroke (2S) scooters, although constituting a small fraction of the [regional] fleet, can dominate urban vehicular pollution through organic aerosol and aromatic emission factors up to thousands of times higher than from other vehicle classes.”
https://www.greencarcongress.com/2014/05/20140523-platt.html

According to the EPA, one gas-powered lawnmower puts out more pollution in one hour than 11 new cars do in one hour. And that’s from Trump’s EPA! Worrying about a few polluting scooters is much ado about not much.

Chris I
Reply to  Mike Quigley

It’s fitting that you mention Trump, because that’s impressive Whataboutism there. What do gas lawnmowers have to do with a discussion of 2-stroke mopeds in bike lanes? Coal plants pollute a lot, as well. Does that mean we don’t need to worry about pollution from transportation?

Well this is awful. When s person is dead it’s pretty harsh to dwell on what vehicle they were using at the time of their death.

That said, I’d like the Street Trust to tread carefully around this LIT business. Human Power requires breathing a lot of air. 2 stroke engines should be a thing of the past.