Thanks to restoration efforts by Metro, a former landfill northeast of downtown St. Johns is already blooming with plants and wildlife. The next thing the agency wants to grow at the site is a path so more people can enjoy it.

Metro announced last week that initial design and engineering have begun on a new section of path and a carfree bridge that will go over Columbia Boulevard to connect Chimney Park to what’s known as St. Johns Prairie, a 244 acre parcel of land between the slough and Smith and Bybee Lakes. The project is a joint effort between Metro, Portland Parks & Recreation and the Oregon Department of Transportation. In addition to the new bridge over Columbia Blvd, Metro is in early stages of design on 1.5 miles of new path and bridge that will connect Chimney Park over the Columbia Slough and onto the prairie, ending at a viewpoint overlooking the lakes.

Metro Senior Parks and Nature Planner Allan Schmidt said they’ve begun negotiations with a local engineering firm to design the new path. A public process to garner community feedback will begin early next year. Initial funding for the project comes from a service charge Metro collected on every ton of waste dumped at the landfill. More funding to complete the project still needs to be found. 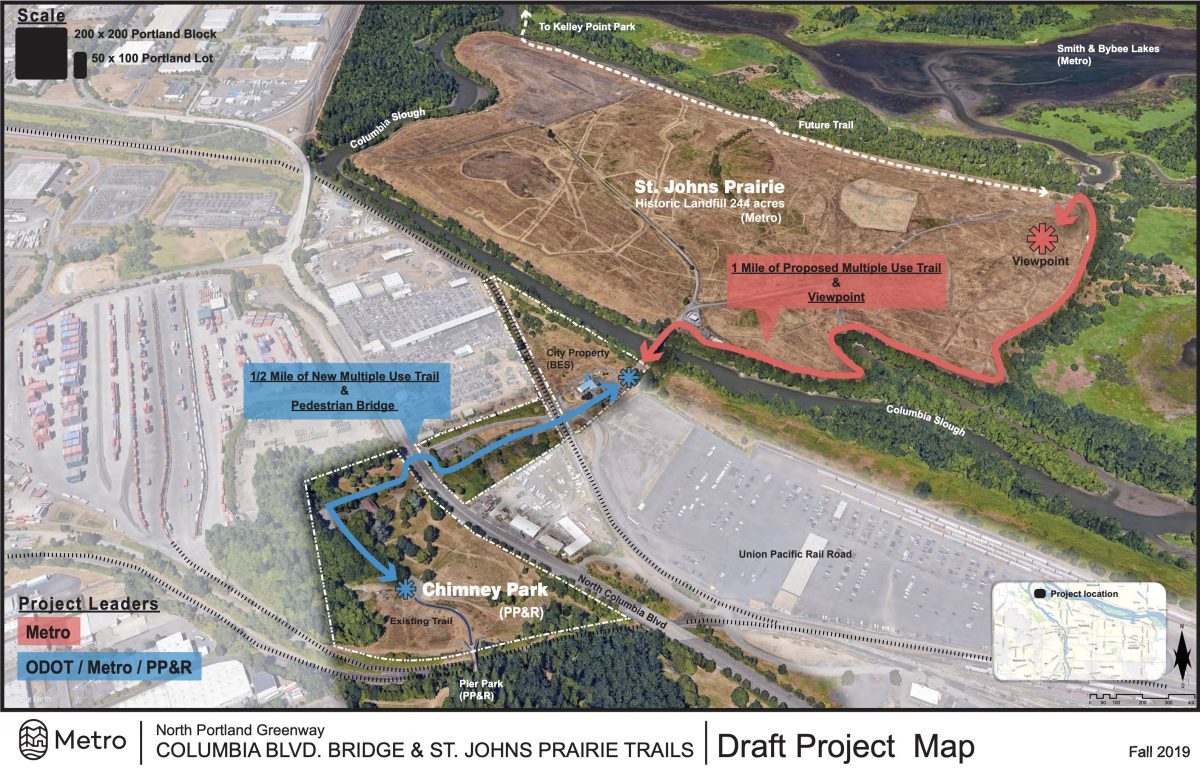 Work on the new bridge over Columbia Blvd began this week. That project is completely funded. Once initial design and engineering is done, public engagement will start next year.

Once complete, the new bridge and path will add about two miles to the North Portland Greenway and leave us tantalizingly close to having a carfree path from North Vancouver Avenue in the Piedmont neighborhood to Pier Park in St. Johns. PP&R completed a bridge that connects Pier Park to Chimney Park in 2014.

Sign up for project updates and learn more at OregonMetro.gov.

npGreenway (aka Friends of the N. Portland Willamette Greenway Trail) are really excited about these two projects. Two years ago some of us toured The Prairie, and even on the rainy March Saturday, the view over Smith-Bybee was awesome.
Metro is to be applauded for moving quickly so that folks in N. Portland (and from everywhere!) can get not just over busy Columbia Blvd., but also up to The Prairie viewpoint. On a spring day with revegetation underway for some years, the wildflowers, grasses and birds will be a magical. One more not so easy bridge over the North Slough, and it will be a car-free walk or ride from St Johns to the Confluence at Kelley Point.
Now how about Willamette Cove and the Ash Grove Cement Road?!

We can’t even get real singletrack mountain bike trails on a former landfill? Oh ffs.

I rode out to chimney park just a couple weeks ago looking for this missing connection only to find the UPRR yard and no public access to the prairie, so I am happy to see this news. There is an overgrown asphalt path – in bad need of repair or rebuild – that runs along the north side of the north slough and appears to connect to a crossing in the northeast corner of the prairie. I couldn’t reach it, though, because of a washout. The same path splits off where the MUP along Marine Dr/Lombard mounts the curb opposite the entrance to Kelly Point. I’m surprised I haven’t heard more about this forgotten path or its potential for connecting Pier/Chimney Parks to Kelly Point with something much more pleasant than the traffic adjacent to the Lombard/Marine Dr MUP. Now if only something could be done to mitigate the metallic tang on the air left by all the scrapyards in the proposed area for build-out..

Christopher of Portland
Reply to  resopmok

That closed path used to be in good enough shape that you could ride to the end of it. It didn’t connect to anything but was a nice detour through the trees if it wasn’t too creepy for you.

Very exciting. Thanks for covering this. I often wonder what’s the latest on the other end of the NPGW, connecting Swan Island to the Steel Bridge via the Albina Yard. I assume we are just waiting for new development to trigger trail development, but perhaps there will be funds in Measure 26-203 (Metro’s green spaces bond measure renewal on the ballot this November) that could help move things along.

Right you are Jim Labbe. Measure 26-203 on the November ballot should provide some funding for the North Portland Greenway Trail between Swan Island and the Steel Bridge as well as on Swan Island itself.

Francie,
can you elaborate some on the route planned between Swan Island and the Steel Bridge? DEA and PP&R did an extremely poor job of planning this route, IMO. Instead of focusing on creating a legacy trail ALONG the river that prioritized pedestrians, bikes and views of the river, they proposed a makeshift (cars-first) route that meandered up the Larrabee overpass and all over the Rose Quarter in bike lanes and with many sketchy street crossings.

If the Larrabbe Viaduct were structurally reinforced, the “southbound” lane of Interstate Ave would be redundant for cars between the Tillamook traffic signal and the Larrabee traffic signal- all motor vehicles would be routed over the viaduct. The southbound lane of Interstate Ave could then become a reasonably nice Mixed-Use Path from Tillamook to the south side of the Broadway Bridge. Continuing south, the route would jog west to the top of bank across the former Thunderbird Hotel site. The ideal connection to the Esplanade is actually UNDER the Steel bridge on a viaduct constructed over the RR access road (complex and expensive, but safe, direct, and lovely).

North of Tillamook, I think the preferred route is the Cement Road, but until that gets sorted out with the RR, why not head down Tillamook and along River road until you get to the Fremont Bridge. A new trail could be built under the Fremont Bridge back to Greeley where it would follow along Greeley on the WEST side, outside of the interchanges. The path should continue UNDER the Going Overpass and travel along the base of the bluff, eventually rising to meet the Waud Buff Trail, crossing the RR tracks and continuing north as planned on the outside of the tracks around the bluff where UP sits.

Fran much thanks to you and other NPGW advocates and enthusiasts (e.g. Lenny Anderson) for your steady persistent and advocacy for NPGW. It is a model for getting meaningful things done that a lot of folks could learn from. Lots of high profile but all too ephemeral “flashpoint activism” out there. NPgreenway is the real thing.

No tents shown in section sketch

LOL, I like how they’ve rebranded what used to be the state’s largest solid waste dump a ‘Prairie’. BTW, all that trash is still buried there, including a bunch of toxic industrial waste, so not a good idea to eat fish from anywhere near this thing.

I live less than 1/4 mile away from this new trail. I live off the north side of Columbia Blvd. As it is our neighborhood is isolated from the Peninsula Crossing trail and the new St johns Prairies trail due to a lack of sidewalks and a bike lane that would connect our neighborhood to these wonderful places. My hope is that Metro and PBOT will work on a way to add a sidewalk and or a bike lane so that my neighbors and myself will be able to safely access these trails. It is ridiculous to live so close to trails and yet be isolated by a freight route.

Pat,
The degree to which PBOT has isolated that neighborhood borders on criminal