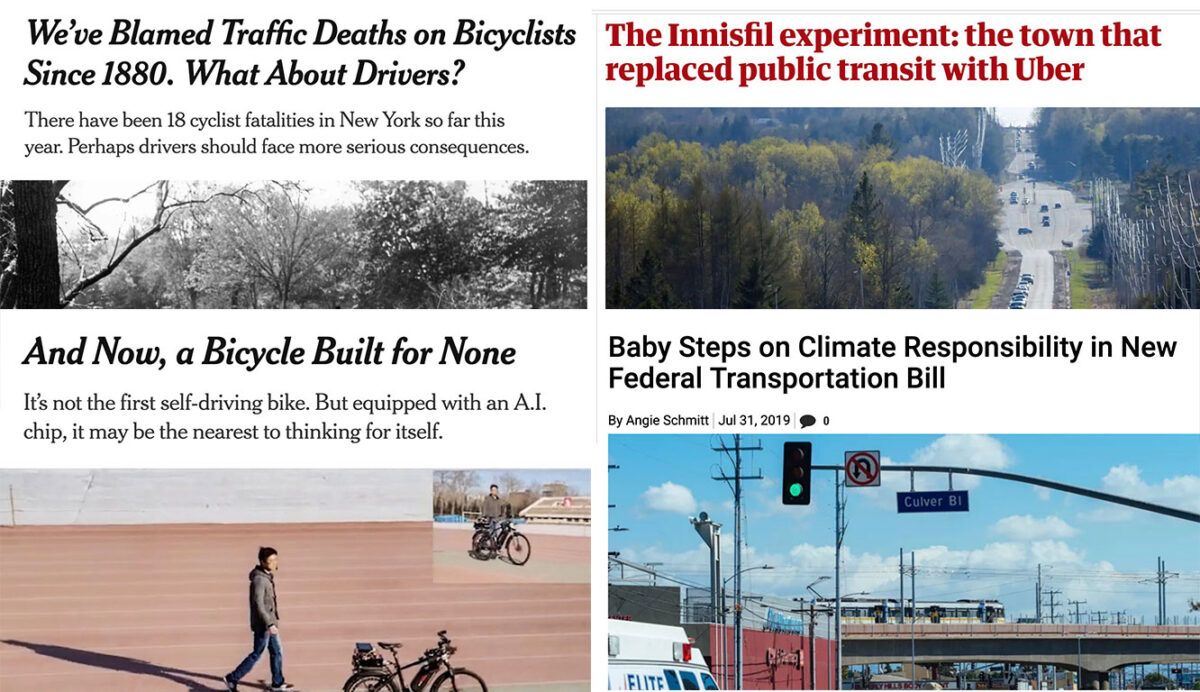 Welcome to the week. Here are the most noteworthy items we came across in the past seven days…


Federal transportation bill: Streetsblog USA has highlights of the $287 billion transportation bill making its way through the sausage-making process on Capitol Hill. The takeaway? It’s far from the reforms we need; but it could be worse.

Self-driving bicycle: Probably more of a proof-of-concept than a revolutionary step for cycling, this robot-bicycle can understand commands and roll by itself.

Oregon’s $15,000 road bike: Argonaut, a bike brand formerly based in Portland that has set up shop in Bend, got their carbon road bike featured in VeloNews.

E-bikes are so hot right now: Electric bike share provider Lyft was forced to pull its fleet from the streets of San Francisco after a few of them caught fire. The company, embroiled in a fight over exclusivity to provide the bikes in SF, now says the fires could have been work of vandals.

E-scooting polluting: A study published last week found that e-scooters had a more negative environmental impact than you might expect, especially when you factor in the use of cars to rebalance them.

Bicycling and climate policy: As the U.S. devolves into partisan bickering over climate change and our DOTs claim that expanding freeways are good for the environment, the Dutch have put bicycling at the forefront of their aggressive climate policy.

Serves him right: This driver admits his guilt in hitting a bicycle user and then can’t believe the insurance company blames him for it. Thankfully, the newspaper’s transportation columnist answered his letter correctly.

Serves Him Right: Love the sermon!

The Uber story says they replaced public transit with Uber, not the other way around.

That was a mistake. I’ve corrected it.

The Innisfil experiment: the town that replaced public transit with Uber.
One of the aspects of public transit in the USA versus Canada is that we in the US are required by ADA law to provide dial-a-ride service to all our disabled users within 0.75 miles on either side of any public transit fixed route service. This is as true here for GTA in Greensboro as it is for TriMet in Portland. While the costs of fixed-route service are easily measured (cost of drivers, buses, fuel, maintenance, etc), a set of costs that do not change much even when ridership levels change. However, the cost of dial-a-ride (aka lift or paratransit service) increases with higher use, longer distances, and trip-chaining versus point-to-point service. It doesn’t help that we charge the same per ride for paratransit as we do for fixed-route (we are allowed to charge double, which TriMet does). And our suburban sprawl is another issue. Our costs for fixed route are $4.18 per ride and we charge about $0.60 per ride (including for discounts), the rest being subsidized through property taxes and federal subsidies. Our costs per paratransit ride is $33.16 per ride, with the same $0.60 charge. So I can see the temptation to switch to Uber, Lyft, or even regular Yellow Cab for our required paratransit service – non-unionized workforce, cheaper gas, point-to-point service, vast reduction in costs, etc. The reason we haven’t done so is a mix of security (background checks for drivers), inertia, and a naive desire by government to know all full costs in advance.

That study on e-scooter lifetime emissions is illuminating. It shows that with current usage patterns (only ~35% of trips replace a car trip) and the incredibly wasteful daily collection/redistribution of these scooters, they end up only being roughly twice as efficient per mile as a car. Where as a bike is 52 times as efficient per mile.

That said, there is certainly room to make scooters much more efficient than they currently are. The most dramatic way of doing so is by not allowing them to be dockless. If they had to be docked at charging stations, it would eliminate the source of ~50% of their lifetime emissions. Docking them would also almost certainly increase the average lifespan of a scooter, so you get more miles out of the environmental cost of manufacturing them.

Granted, by docking them you are introducing inconvenience to the end user, which means that ridership will go down to some degree unless the docks are quite plentiful.

Some of us here have suspected something along these lines for quite a while. Interesting to see these hunches confirmed.
Also worth remembering that ‘efficiency,’ so called, is rarely the measure we would like to think it is. Bikes are best for a hundred reasons, efficiency (assuming we understand what that word means) being but one.

Chris I
Reply to  Tim

Does that mean I’m 156x more efficient than a SOV car driver when I’m biking with my two kids on the back?

Sam
Reply to  Chris I

Only if your kids have their own cars and are using the back of your non electrified bike as replacement trips.

“E-bikes are so hot right now”

LOL Thank you Jonathan for the much-needed humor during emotionally difficult times.

It makes sense for large cities with regular ridership to have fixed bus routes, but why can’t smaller municipalities implement flexible route buses? Or just hail the bus like a cab on the street?

I know some rural and semi-urban areas of Minnesota have flex-route public bus service, probably elsewhere too. You contact the transit agency in advance to pick you up at one of a certain set of possible locations within a corridor and later inform the driver on your return trip where you want to be dropped off. It takes extra personnel for dispatch, but it’s more efficient that most paratransit and taxi services. The reason it can’t be done in an urban setting is more for policy and administrative reasons from the subsidizing agencies.

I never plan to use Uber / Lyft because they are non-certified “taxi” operators, park in bike and through lanes, and they steal from public transit.

Alas, all the same could be said of bike share and scooter share operators. Or individual car users for that matter.

Middle of the Road Guy
Reply to  rick

They also provide a service that transit does not.

They also show up when they say they are going to show up, don’t try to bilk you for extra fare, take credit cards, and don’t try to bully you in to paying cash.

That road design leading to the Nimitz where the motorist hit the cyclist is something else. A disappearing bike lane that leaves you in need of crossing over not one but two on-ramp lanes and then, cherry on top, you have to merge into that third lane.

The traffic engineer who approved this should be compelled to ride on it for at least an hour each and every day for as long as he lives (over-under of a month). That’s gross malpractice.

Studies have consistently shown that what deters criminal behavior is not the severity of the punishment, but the likelihood that any kind of punishment will be meted out. Thus, what we need is generally not for drivers to face stronger consequences, but for those consequences to be much more certain.

This is the deal. Having only “random” consequences encourages gambling-type behavior, which we know is addictive. If we could “gamify” safer driving, it might help. Did you make it all the way to work without breaking the speed limit once? Free coffee for you! Perhaps the best way to encourage safer driving is with the gadgets insurance companies use to track “safe drivers”.

“Don’t mess with my discount!”

This weeks theme: The simplest solution is the best solution, bicycles.

The mountain of “bipartisan” bucks going to yet more freeway carbon sucks. This is why we are doomed. Forget the solar panels and lightbulbs, there’s a herd of carbon elephants rampaging through town on freeways. Here’s a bipartisan idea, no more government waste to destroy us. When in a hole, the first rule is to stop digging.