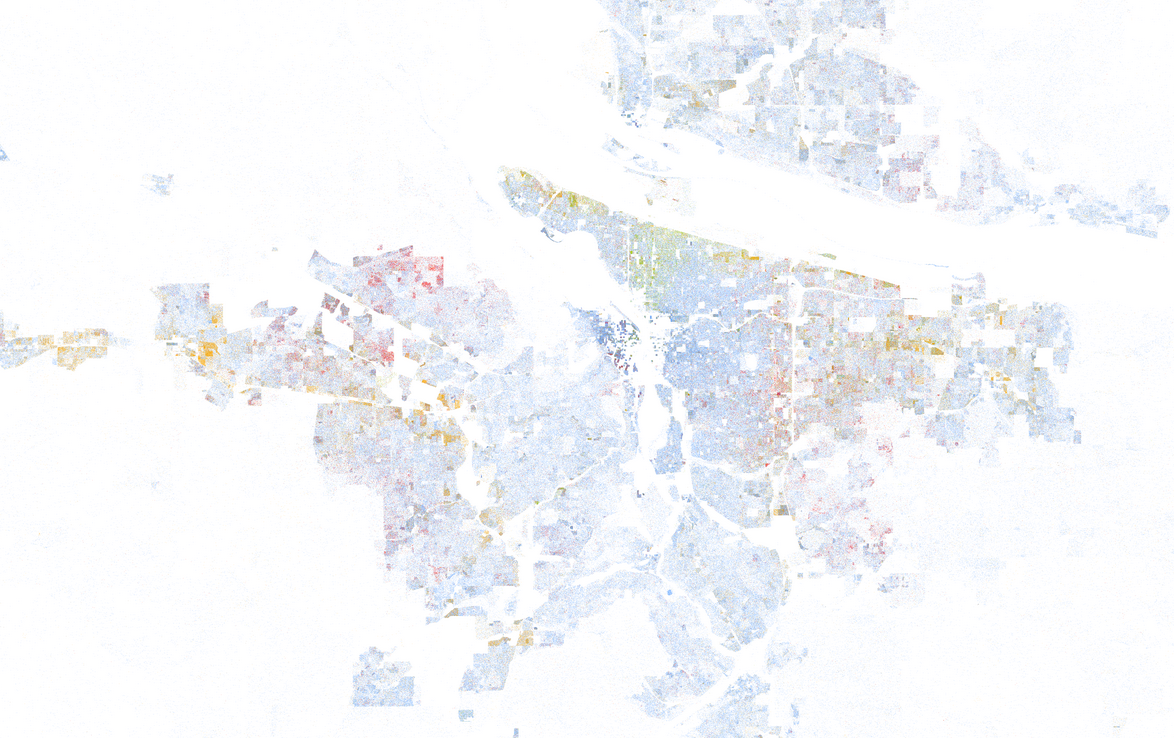 Many North American cities are oddly un-city-like compared to their peers in Asia, Europe, Africa and even South America. Our cities are weirdly spread out and the damage to our environment and economy is colossal.

Why did this happen?

The New York Times’s “1619 Project,” launched in print last weekend, sets out to explain various distinctly American characteristics with a decoder ring: chattel slavery. Understand the ways multigenerational slavery twisted US society, it argues, and you’ll understand more about everything else in the country, too.

One of the essays, by historian Kevin Kruse, looks at how modern American transportation and housing were shaped by deliberate and largely successful attempts to preserve racial segregation. The effects, he argues, are visible on downtown freeways every weekday morning as hundreds of thousands of commuters try to drive in from far-flung suburbs.

He’s writing about Atlanta, but much of the story will be familiar to anyone sitting at the Rose Quarter.

Commuters might assume they’re stuck there because some city planner made a mistake, but the heavy congestion actually stems from a great success. In Atlanta, as in dozens of cities across America, daily congestion is a direct consequence of a century-long effort to segregate the races. …

At first the rule was overt, as Southern cities like Baltimore and Louisville enacted laws that mandated residential racial segregation. Such laws were eventually invalidated by the Supreme Court, but later measures achieved the same effect by more subtle means.

Kruse goes on to discuss suburbanization and “white flight,” both of which were federally subsidized by freeway construction and tax-free mortgages but doesn’t spell out the factors that made suburbs so disproportionately white. What linked sprawl and segregation?

Some of the suburban power to exclude came from racial discrimination by the federal government, the real estate industry, law enforcement, and neighbors. And some was baked into suburb-style zoning—separating homes and shops, banning apartment buildings and even duplexes—requiring everyone to pay for one or more cars and for a hefty amount of private land.

Sprawl enforces segregation, in other words, because the median white family has $171,000 in wealth and the median black family has $17,600—a gap created by slavery and perpetuated by both deliberate racism and systemic racism.

One of those systems was low-density zoning: a technically race-blind way to continue a long chain of segregation policies, from racial zoning to restrictive covenants to apartment bans.

Here in the Pacific Northwest, where even our biggest cities were built mostly after modern zoning became popular in the 1920s, auto-oriented sprawl is common within a few miles of every downtown. That’s one reason segregation took root here, too, across the continent from Virginia’s tobacco farms.

As I wrote last year, you don’t have to be racist or classist to live in a neighborhood shaped by racism and classism. But whoever you are and wherever you live, your life is still being shaped by the ways these forces shaped your neighborhood.

Very likely, your life is being shaped by this every weekday morning.

Makes sense to me.

No sense at all.

Where is the data?

Portland is not diverse, but is pretty well integrated.

When the population is so heavily white, what would “segregated” look like to you?

If you want data, the 2010 census is a good place to start. Also “Portland Oregon segregation redlining” brings up good explainers.

There is whole lot to think about here. Powerful graphic representation.

Show me some numbers.

On the silly cartoon?

Thanks for continuing to post stories like these Jonathan! I believe that is extremely important for any one that identifies as a transportation activist to understand and educate ourselves about the impact systemic racism in America has on how we all get around. Its NOT enough to just build more bike lanes and take away parking spots. If we want transformative justice in transportation then confronting racism and our role in it is required!

I read the Times article before I saw this, called “How Segregation Created Your Traffic Jam”. They focused on highway design and construction with hardly a mention of zoning, but I guess when Sightline is the piper, they call the tune.

What I’d really be interested to know is if segregation has increased or decreased in Portland since, say 1990. The dot map looks pretty but is hard to understand, especially without comparison with other years. I know nationally there is more racial integration (but possibly less political/social integration?), and my knowledge of the city suggests less segregation, but I’m not sure how it looks at a more analytical level.

Finally, how many neighborhoods are there in the world that are not somehow shaped by racism or classism?

I-5 & I-405 were largely built through poorer neighborhoods of all stripes…N. Portland, Albina, Central Eastside, NW, Goose Hollow and South Portland. Note how I-205 loops way to the south to avoid LO, missing a logical connection with 217. Urban freeways, really toxic rivers, are a crime against humanity and should be removed and replaced with 21st century infrastructure appropriate to a cooking earth!