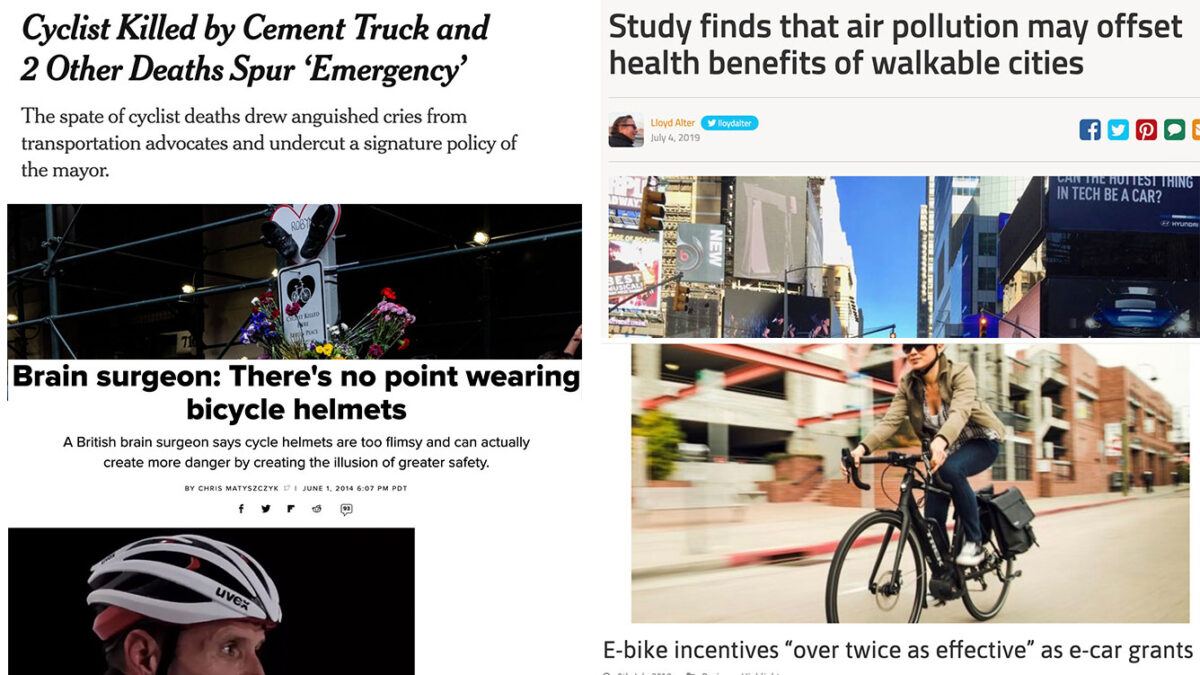 This week’s Monday Roundup is sponsored by Community Cycling Center, the Portland-based nonprofit that’s celebrating its 25th anniversary this year.

“20-minute neighborhoods” and air quality: What if the health benefits of Portland’s much-ballyhooed walkable urbanism were cancelled out by the daily scourge of toxic traffic?

Snob nails it: If you want to understand what’s really going on in NYC, refer to the work of Eben “Bike Snob NYC” Weiss. He insists the only way to make roads safer is to get cars off of them.

Speed cameras in NYC: The Big Apple is going big on speed cameras with an effort to install 2,000 of them throughout the city.

Cameras on your bike: A cycling journalist lays out the case for why you should attach an on-board video camera to your bicycle.

Gas on helmet debate fire: A brain surgeon says not only are helmets useless, they might even make cycling less safe. — *This article is several years old. I didn’t catch the publication date and I regret any confusion.

E-bike grants: UK-based advocacy group Bicycle Association says grants that promote the purchase of e-bikes are a much cheaper and efficient way to reduce greenhouse gas emissions than incentives to purchase electric cars.

re air quality: On my Springwater/Esplanade/street bike commute route, it seems like exposure to “toxic traffic” from the freeway right next to the Esplanade has gone up considerably since numerous trees and other foliage were removed by Parks Dept. Hoping PP&R will replace those with a green screen against the fumes & noise during the fall planting season.

As quoted at the end of the article, “Start by finding a cleaner, greener place to do it.”

How will you get there? Given a lack of bike or transit infrastructure in most of the USA, people will drive there – they really have no other practical choices, do they?. To go for a walk. As they already do for bicycling, for the 25% who own a bike but are too scared to ride on city streets.

We as a society are totally screwed, in all kinds of different ways.

About 10-odd years ago a similar report came out about bike helmets. Better to wear a full-face motorcycle helmet. Personally, I’ve never owned or worn a helmet, and have been riding for about 60 years, and have had four major over-the-handlebars headers. I’m lucky, I know.

I too agree that wearing a helmet is a matter of personal choice, as are a lot of things in life, such as cooking with fresh cream, bike lanes on busy fast streets, and greens eggs with ham. I’ve personally been wearing helmets while bicycling since I was 18 and required to have one for a bicycling 101 class at the University of Oregon, 31 years ago (A Brancale if I recall correctly.) I feel naked without one. But I freely admit it ain’t gonna do much to save me when the Volvo semi hits me at 65 mph on the busy arterial on my way to my chemotherapy session.

In all honesty, do you think our local authorities would act, and follow-up with a ticket, if you gave them video proof of a traffic infraction? I think it would go in the circular file personally. Has anyone had any success at this in Portland Metro?

Couple years ago I got video of a driver making a super close aggressive pass, then deliberately forcing me off the road and pulling over to verbally harass me while I was on the phone with PPB. The responding officer used the video and clear audio only to validate his presumption of my guilt, not the driver’s. This is the sham promise of video – any ambiguity or chance for misinterpretation will be used against you, so maybe it’s just better not to have it at all. For evidence, check out all the victim blaming comments on any public video involving a driver vs. rider crash. Also those cameras are just another thing to charge and put on/take off at every stop. Not worth the trouble, IMO…

One more negative outcome of having the camera — oddly, I found myself looking for reasons to catch poor behavior on camera which took me out of the defensive riding zen attitude that’s much better for the soul, again IMO…

I as well have found that police generally don’t care at all about video footage of the “everyday” violent behavior cyclists have to deal with. I’ve mostly resigned myself to the knowledge that my footage will only ever carry serious weight in the event I am no longer around to tell my side of an incident.

Dan A
Reply to  jonno

Thank you for doing this!

Agree, I’ve had decent luck with employers supposedly following up with their employee’s after posting my footage on social media. Well, at least I’ve got a response from them and an indication they care…

What kind of camera do you use?

I’m not local to this area (Maine, US), but I’ve had luck with police calling or visiting people to give them a warning for various close passes or other poor driving behavior I’ve captured on video. Posting every illegal (less than 3 feet) pass would turn into a full time job, so I only post the most notable ones to youtube/the police. If it is video of a commercial vehicle, I’ve had good luck contacting the companies directly.

Middle of The Road Guy

Should have crashed into Video Only. You’ll be sorry.

bikeninja
Reply to  Middle of The Road Guy

A joke only us old time Portlanders would get, RIP Tom Peterson

FWIW, note that the neurosurgeon-on-helmets article is five years old.

yikes. that’s embarrassing. usually I catch stuff like that. Sorry. Will edit it out.

Kind of dangerous citing one MD don’t you think. How about being responsible and following it up with articles that recommend wearing a helmet, unless there aren’t any.

Dan A
Reply to  Mike

Wearing a helmet is great. I wear mine 24 hours a day, just in case.

re: NYC Emergency.
article leans heavy on dangerous trucks roaming the streets…Hightman video, unless i’m misunderstanding it, shows the messenger cycling on the sidewalk under scaffolding and then entering the intersection at pace, crashing as they fumbled trying to stop realizing there was a truck in the intersection.
i’m not being tedious.
net result doesn’t change…its a tragedy.
cars/trucks colliding with bikes is a one sided equation.
but i think progress ultimately comes thru truth, not emotional-truth narratives.

On the brain surgeon: I’m more interested in a scientific analysis than one surgeon’s anecdotal evidence. I’d like to see a peer reviewed study of multiple hundreds/thousands outcomes, which take into account: helmet (or not), speed of cyclist, speed and size of motor vehicle (if involved), age of cyclist, and any other variables the researchers consider relevant. I just watched a few YouTube videos on cycling in Utrecht and Copenhagen – most of those cyclists are not wearing helmets, but they’re also riding slow bikes fairly slowly (I’m guessing no more than 8 – 10 mph), and are not sharing the thoroughfare with automobiles. Consequently, an bike incident is most likely a fall, with scraped knees rather than a head injury. If I’m cycling on a road bike at 15 – 20 mph and hit a pot hole and go A over T, I’d rather have a helmet than not.

If US police in general, and PPB in particular, are not interested in video footage, perhaps post it to social media, to shame both the driver and the PPB. I’m pretty sure Commissioner Eudaly would be very interested. If it’s Milwaukie Police, send it to the Mayor of Milwaukie.

Ryan
Reply to  Matthew in PDX

I take all info I hear (either for or against) with a grain of salt, but this site does have some interesting info regarding helmet effectiveness: https://www.cyclehelmets.org/

That appliance store would have been fine if it was wearing a helmet.
https://buildsafe.tumblr.com/

What I really hate is when the appliance store jumps out at you out of nowhere.

Report from the BBC website on a crackdown on drunk electric scooter use in Copenhagen: https://www.bbc.com/news/world-europe-48916918

What I find so weird about the report is not that people use the scooters while drunk (apparently one of the largest user groups here in Greensboro NC’s 200 Lime Scooters), but rather that the BBC seems to be oblivious to the widespread use and distribution of electric scooters throughout the US – pretty much every major and a lot of minor cities have them now.

BCC reporters are in their “safe place”.

Why should they read US news sources or be dispatched to the USA now (unless they get combat pay)? 😉