Evan Ross is a serial cycling entrepreneur who understands the local bike scene and how to create a viable business around it. That intuition served him well when the idea of cheap bike rentals available in seconds from a mobile app was first pondered in Portland.

“I started my business to get more people riding bikes. Biketown works toward that same goal, so it’s hard for me to be a hater.”
— Evan Ross, Cycle Portland

Ross founded his bike shop and tour business in 2008. That’s right around the time the City of Portland’s efforts to start a bike share program were heating up. Lucky for Ross he had a bit of time before any bike share system would hit the ground. Portland infamously stalled on the program several times before finally launching Biketown in 2016.

From the get-go, Ross knew it would impact his business. “I was scared; but I saw it coming and I had time to adapt my fleet,” he said during a chat with him outside his retail showroom on SW 2nd Avenue in Old Town yesterday. I’ve known Ross for years and can recall being a bit surprised when he didn’t share my enthusiasm for bike share. A dedicated bike advocate and former member of the City’s Bicycle Advisory Committee, Ross wasn’t as excited about the idea as other advocates I knew.

“I knew my rental numbers would go down. That was always the threat with Biketown,” he shared.

And Ross was right. His revenue did go down. But he didn’t let that stop him from turning it into a positive. 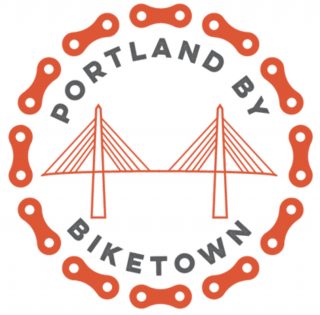 Earlier this week, Ross announced an official partnership with the City of Portland to lead “Biketown Tours”. “Using public bikeshare you’ll cruise the waterfront bike path, discover Portland’s past and present, and ease into city riding with our experienced guides in America’s bike capital,” reads the copy on his new BiketownTours.com website.

For Ross, the third time was indeed the charm. The tours come after two previous attempts to work with Biketown fizzled out. He first hoped to get the maintenance contract for the fleet, then he tried to position his shop as the official helmet and map supplier for Biketown users. Neither of those came to fruition, but Ross maintained a working relationship with bike share program staff. And he remained optimistic.

I asked Ross how he went from seeing Biketown as a threat, to embracing it as a partner. “I realized bike share companies are really good at supplying bikes, but not in curating routes and building a connection to the local community,” he said. “Then I had this epiphany when I realized I spend a lot of time maintaining my fleet, and if I can outsource the maintenance of the bikes, but still provide the tour, it would be a bit advantage to me. I’d save wear-and-tear on my bikes — and not have to store, fix, or buy them in the first place.”

And there were also philosophical reasons for the partnership. “I started my business to get more people riding bikes,” Ross said. “Biketown works toward that same goal, so it’s hard for me to be a hater.”

Biketown (which is operated by Motivate, Inc., a Lyft company) loves the tours because Cycle Portland’s guide staff acts as a concierge to their system. The guides helps riders with rental checkout (including how to push the buttons on the keypad so they respond), offer tips and advice on how to stay comfortable on the bike (saddle adjustment is key), and they educate new riders about safety and rules of the road.

The $20 tours last about an hour and depart from the plaza in front of Voodoo Donuts on SW 3rd Avenue and Burnside. Riders get a $5 discount on their Biketown rental when they sign up. Learn more at BiketownTours.com.

Didn’t happen in my worn old version of Biketown app, but would be neat if his tours popped up as a suggestion particularly to new users. I’d bet alot of folks would be interested at that instant, especially when they all of a sudden realize they have no idea where to start rolling (plz not up Hawthorne w/o a bike lane….).

Congrats, Evan! This is a really great thing!

Good for Evan! He must have some business smarts and also doesn’t let a couple of setbacks discourage him — chapeaux!!

Evan’s, comments below are similar to my experiences in DC + Long Beach CA during my years at Bikestation (as we rented bikes in a city with bike share services like DC) and now as a manager of Biki (the bike share service in Honolulu).

He is very spot on at what bike share does well vs. IBDs/ bike rental shops.

“ ‘I realized bike share companies are really good at supplying bikes, but not in curating routes …,” he said. “Then I had this epiphany when I realized I spend a lot of time maintaining my fleet, and if I can outsource the maintenance of the bikes, but still provide the tour, it would be a bi[g] advantage to me. I’d save wear-and-tear on my bikes — and not have to store, fix, or buy them in the first place. ‘

‘And there were also philosophical reasons for the partnership. “I started my business to get more people riding bikes,’ Ross said. “Biketown works toward that same goal, …”

Evan’s epiphany about the outsourcing of maintenance reflects my own experience as an avid rider of both my own bikes and BikeTown. Reducing the wear/tear/theft risk for my own fleet has reduced my costs and some stresses around my own bikes. Just a few of the many reasons I’ve ridden almost 1500 miles on BikeTown. Looking forward to seeing the next evolution after the Motivate contract expires in July.