Ask BikePortland: What’s the best way to carry a dog on my bike?

There are many ways to carry dogs. (Photos: J. Maus/BikePortland)

With summer in the air and June just a few days away, it’s officially biking-with-your-dog season in Portland. 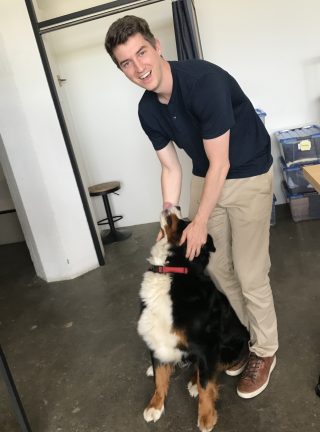 But it’s not always as easy as plopping pup in a pannier and pedaling away. Some dogs need to be coaxed, others just need the right place to sit so they feel comfortable.

I recently met Mac Bishop, founder of Wool & Prince, a southeast Portland-based company that sells merino wool apparel (which is great for biking!). Mac wants to ride; but he has to look after his three-year-old Bernese mountain dog, Rainbow (who has her own Instagram account). “I bring Rainbow to work and haven’t found a good way to bike with her, so unfortunately I drive everyday,” he said. “I would bike if I could find a way to tow her.”

Complicating matters further is the fact that Rainbow weighs 90 pounds. Given her size, a basket or rack would be too small. Some sort of trailer might be the best option. A cargo bike with a big front box might work (see photos below). There’s also the option of setting up a leash and having the dog run alongside; but I’d consider that an advanced skill that isn’t for everyone.

Another complication is that so far Rainbow has been skittish about whole idea. “I tried an old Burley trailer, but she wouldn’t get close to it, and forcing her to do anything is a bit of a nightmare,” Mac said.

Let’s help Mac and Rainbow get rolling! What method of dog-carrying do you think would work best for them? Do you ride with a large dog? Do you have experience getting a dog to relax and feel comfortable being pulled around? What worked for you?

Wait, what about carrying your cat? Why give short shrift to our feline friends?

The Burley Tail Wagon trailer works well — I’ve used one with my pooch for 3 years, probably pushing 500 days of commuting — but it has a stated weight limit of 75 pounds, and I’m pretty sure a Bernese would be too tall to fit even if they were under the weight limit. I think that leaves a custom trailer or a bikfiets — both kind of expensive, but the custom trailer might come out as the more economical option.

While this doesn’t help Mac, if anyone is looking to create a super-secure front basket system for smaller animals (<25lbs), the guys at Crank on SE Ankeny did a fabulous job customizing our bikes to comfortably carry Kepler (my 15lb cat, whom many of you have likely met at TNR/Pedalpalooza). If like me you like to overload your front basket with pets, groceries, camping supplies, or whatever, ask Ian about the system he set up for Jessica's Public bikes. It took a few years of tweaking to get a really secure setup, so I hope others can benefit from the effort too!

Jonathan, something ought to be done about dogs’ love of cars. Roll the window down and their heads will pop out, ears waving in the wind, noses scoping a cornucopia of scent, amazed at the munificence of the planet.

My runt spaniel, Achilles, was the only creature on the block with the guts to hop on a Flexible Flyer and zip down the big hill at Reservoir Park in Saint Louis. He and I got a lot of cred for that.

There used to be a guy at K&F Coffee (26th & Clinton) with an old BMW motorcycle and sidecar, the sidecar being for his Labradoodle. Neat, really neat!

Canines are sensitive creatures. My advice for Mac & Rainbow is to consult James Thurber’s insightful “The Pet Department.” Usually these issues can be worked out with a little common sense.

As far as off-the-shelf commercial bike trailers, the Sunlight Lil’ Hauler Cargo Trailer ($110-$280) will haul up to 120 lbs. But if you are planning to ride regularly with a big dog or a mountain lion, I’d suggest instead a Surly Bill or Ted trailer, they are much more durable and stable with a heavy load, but quite a bit pricier and would require some further customization for shelter and comfort. $800 – $2,000 depending on source and if you are a business paying wholesale or not. Hitches are sold separately from the trailer.

Hooray, dogs on bikes are the best! I’ve got it easy with a 9-pound dog, but I can relate to having a dog who doesn’t want to ride alone in a trailer. I can get my dog in a trailer if she has a kid with her back there, but she really prefers being up front. I do think you could eventually train your dog to be OK with the trailer, as stated in comments above, but also: trailers are a bear to tow around with that much weight in them! Having all the cargo weight up on two wheels is really nice. I think you’d both be very happy with a front-loading cargo bike (you can test ride a variety at Clever Cycles and Splendid Cycles), but I’ve also seen large dogs on cycletrucks (like the last left photo in Jonathan’s post). There are conversion kits (from Haulin’ Colin and Crust) if you want to change an existing bike into a cycletruck–they replace the front wheel with a 20-inch wheel and add a frame-mounted front rack upon which you could put some sort of dog container (I’ve seen a big Rubbermaid that worked well). Any part of the dog or container that reaches above the height of the handlebars will get bumped when you turn is the only problem. So my official vote is for front-loading cargo bike/long john/bakfiets. I hope you’ll update in the comments!

Before we had kids, I would haul our two 50lb dogs on my Big Dummy, using a wideloader set and two plastic tubs, secured to the Xtracycle rack with ratchet straps. It worked really well, but is only stable because the load is balanced. Carrying a single big dog would be hard with anything but a box bike, I think.

Chris I
Before we had kids, I would haul our two 50lb dogs on my Big Dummy, using a wideloader set and two plastic tubs, secured to the Xtracycle rack with ratchet straps. It worked really well, but is only stable because the load is balanced. Carrying a single big dog would be hard with anything but a box bike, I think.Recommended 0

The Houndabout pet trailer (from Solvit) served us well for occasionally getting our Great Dane around bike. It had lower axle base (lower center of gravity for dogs) and a 100 lb. weight limit. Also had a lot of venting and a few places to attach a leash.
You can find it on amazon or a few other retailers.
The quality wasn’t amazing, but it worked well enough.

I converted an Instep trailer (like a Burley) by removing the sling seats and lacing a piece of cabinet-grade 1/4″ plywood to the frame with zip ties. My previous dog (65 lb) loved to ride in it from the get-go, with a dog blanket for padding/footing. She’d stay in with the cover up or down. My current dog (40 lb) will tolerate it for a few minutes, then he jumps out even if it means escaping from the cover or scratching out the mesh window. Leashing him in just makes the inevitable escape worse. He will happily sit and ride in the large Wald basket on the back of my wife’s trike, even though it is a bit wobbly and has no enclosure, but he’ll jump from it, too, if there’s a good enough attraction, so we only do that on very safe streets. He’s good at trotting beside bikes on leash, but it took several months of practice to reduce lunging. Again, I use low-traffic streets. Trotting speed is about six MPH, so it’s easy to over-exert or over-heat a dog by running them faster for several miles. Be careful of your dog if you run them by bike!

We live about 1.5 miles from the dog park and have trained our 40+ lb Springer Spaniel to run with the bike using this: https://www.chewy.com/walky-dog-plus-bicycle-exercise-dog/dp/146032 . I wouldn’t use it for long trips (though he can run SO much as evidenced by his ability to outlast me mountain biking) but it’s been perfect for getting to the park faster than walking speed :).

I had a 95+ lb pup that I was hauling by trailer. He, too, was quite scared at first but got used to it. It was a matter of getting him on there the first time (very nervously) and very slowly riding around our street feeding him treats. He adapted quickly.

I used a very inexpensive cargo trailer, similar to this one (with the cover off, of course):
https://www.amazon.com/dp/B0029KKQSK/ref=cm_sw_em_r_mt_dp_U_FJv7Cb3Q77M97

I glued down some foam padding on the trailer floor to make it comfy and give him grip. I then installed a mounting point in the center of the floor, so he was tethered while riding–a chain to his collar, adjusted to give him just enough room to lay, stand and look around, but he couldn’t jump out. He loved riding in it, with the wind in his face.

I currently use one of those bike-mounted leashes like Carrie posted for exercising my dogs . It works pretty well on sleepy neighborhood streets, but would be tricky to use ion a bike lane type of situation. The front loader cargo bike would be ideal, but obviously the most expensive option.

I had a large herding dog that I toted around in an InSTEP 2-seat kid bike trailer. Place a dog bed over the seats and then have them hop in. If they won’t hop in then you can place them in and then let them hop out a few times. Once they see it’s not too tough to get out of then they won’t be so shy about getting in. I used the clips for the kid seat belts to clip to the dog’s harness (don’t just use a collar) so that they couldn’t get far enough forward to get their legs out. (Found that out the hard way when I took off and the front of the dog was running in front of the trailer while the back of the dog was seated in the trailer.) After a while they got used to it and would even lie down.

Small dogs I’ve toted in a milk crate on a standard rear rack.

Currently I have a small dog front-pack (reverse backpack) that I set on my front porteur rack and strap to my handlebars.