Scooters back in the news: Bird in Salem and Portland as final report coming soon 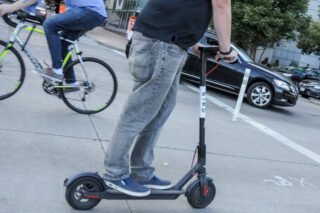 If you’ve missed electric scooters in Portland, you’ll be happy to hear they’ll start popping up again soon. Sort of.

While we don’t have any dates for another deployment, scooters will be back in the news as the City of Portland Bureau of Transportation releases its full report on the four-month pilot program next week.

That’s good timing for officials in Salem who are getting lobbied hard by Bird, a major scooter company and one of the three who participated in the Portland pilot. Salem planners will have plenty of data and analysis to pore over as they consider scooter prospects in the capital.

A story published today in the Statesman Journal reports that Bird executives have already bent the ear of Salem Mayor Chuck Bennett and city staff are likely to meet with the company soon to get their full pitch. That same story mentions the Portland pilot and confirms that PBOT plans to release a full report on it next week. Given the existing survey data and PBOT’s general tone about scooters, my hunch is the report will provide even more momentum for a second deployment.

And if scooters do get the green light in Salem, imagine the impact that could have on the minds of state legislators. A successful and high-profile deployment around the capital might help lawmakers see beyond the automobile when it comes to transportation policy.

Also next week, Forth Mobility (formerly Drive Oregon, a 501(c)(6) public nonprofit that advocates for electric vehicles of all types) will host a networking event where officials from PBOT and Bird will be featured speakers. A webpage selling tickets to the event says they plan to discuss the findings of the e-scooter pilot report and “what the future holds for e-scooters in Portland.”

If the future is anything like the past, scooters have a bright one in Portland.

Back in October, the City of Portland released a survey of scooter riders — 85 percent of whom said they’d be “extremely” or “very likely” to recommend them to a friend.

Salem eh! I lived there for 2 decades and the main use for scooters will be to transport state workers from the far flung ground level employee parking lots to the state office buildings. Could set up a rack of them at each of the prisons so the newly released don’t have to take a cab.

Guest
Just got back

Over the holidays I found myself and my partner in Detroit MI on a mid 50s day with part sun. We rode scooters 19+ miles all over the pace with smiles on our faces. I sure do miss having access to scooter in Portland. I used to love taking them on 1-3 mile trips, or to avoid one leg on a transit commute.

Details on the presentation, and our new collaboration with the TREC Friday Seminar series, here: https://www.portlandoregon.gov/transportation/index.cfm?&a=144945 (or just click my name).

I damned near hit a scooter rider who cut across two lanes of the street in the dark with no headlight or rear light on High Street in Salem. What a dumbshit. I have ridden bicycles, electric scooters (eGo scooters), motorcyles, etc. The current generation riding rentable scooters have a death wish. Dipshit pulled out feet in front of me forcing me to slam on my brakes to save his live and pollute the gene pool. I have doubts about supporting rentals to people who have no hope of being safe.

Vote Up0Vote Down
« PBOT says Greeley Ave bikeway will be built this summer
Family Biking: Join us for a new ‘Storytime’ event series »