*Students from St. Andrews Nativity School at The Lumberyard. Photos by Jonathan Maus/BikePortland

Eighth grade is not an easy time for many young girls. As a father of one of them, I can vouch for that. Getting them to challenge themselves, try something new, and make themselves vulnerable is often like harder than pulling teeth.


“After you do it you’ll feel excited.”

On Wednesday I hung out with a dozen eighth-graders who challenged not only themselves, but my assumptions about them.

The girls were part of an afterschool enrichment program run by Betties360, a Portland nonprofit founded in 2005 by April Snyder and Kristen Wright. This is the fourth year they’ve partnered with The Lumberyard, an indoor bike park on NE 82nd Avenue.

Lumberyard Guest Instructor Elaine Bothe has worked with the girls this year, helping them gain confidence on the ramps and other features of the park. Things were calm and quiet when I arrived, but Elaine said once the girls show up, the energy in the room would spike. She was right. 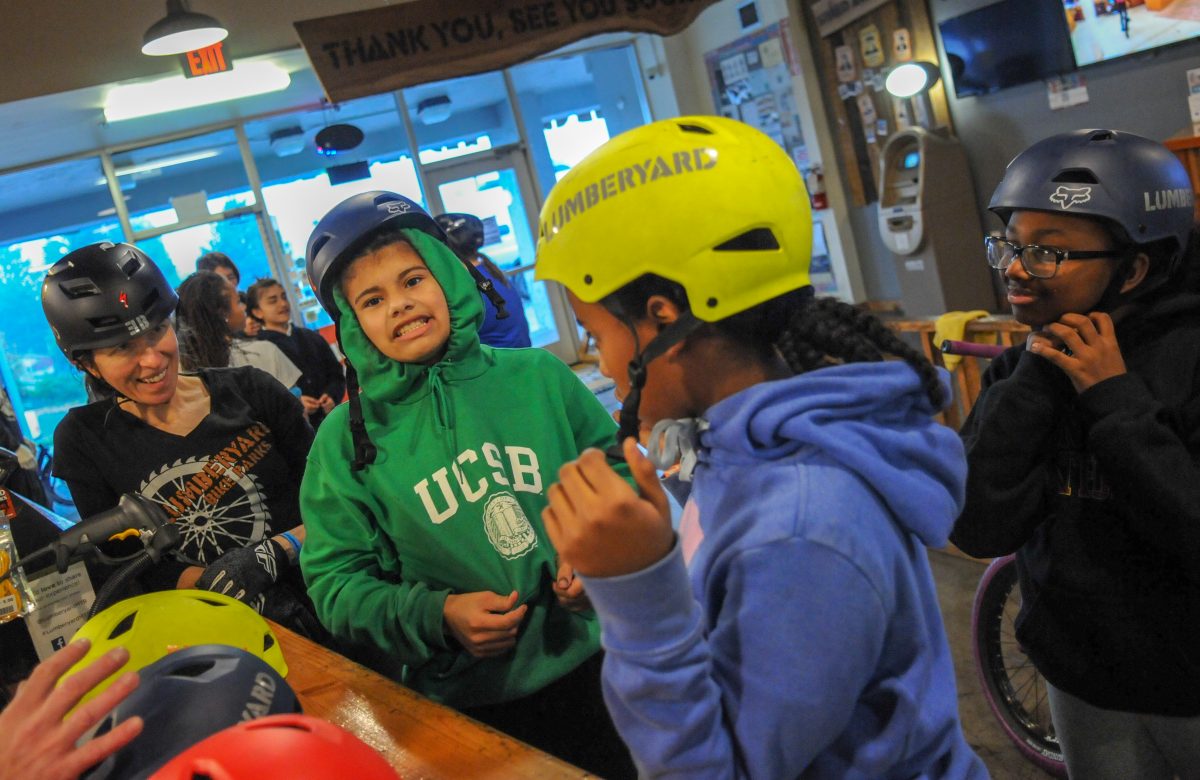 Getting the helmet situation sorted is the first order of business.

As soon as they came in, there was much giggling and jumping around — just what you’d expect when eighth-grade friends are together. The girls were from St. Andrews Nativity, a small, tuition-free Catholic middle school located at NE 9th and Alberta in the heart of Portland’s Soul District.

The first order of business was to get hair and helmets in order. Then they chose their bikes from a fleet of rentals. The Lumberyard’s features lend themselves well to “BMX” bikes with 18 or 20-inch wheels, upright bars, and relatively small frames which make them easy to handle. 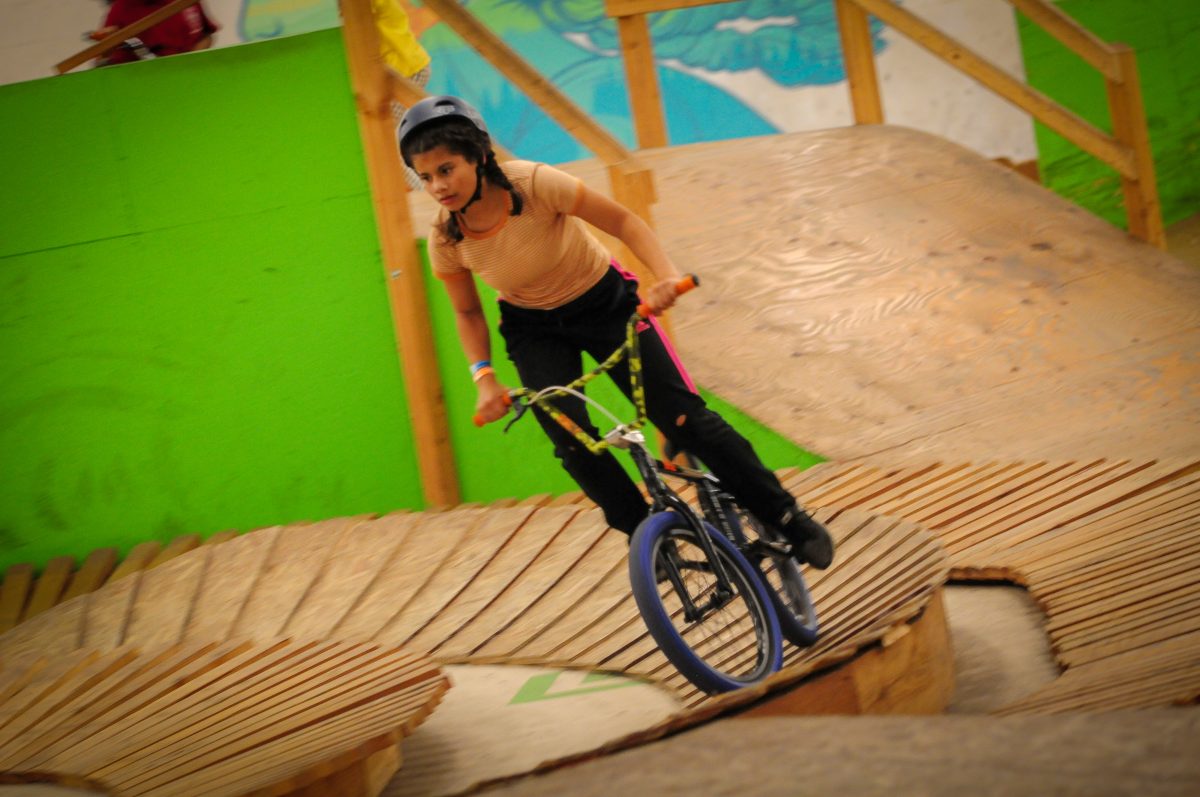 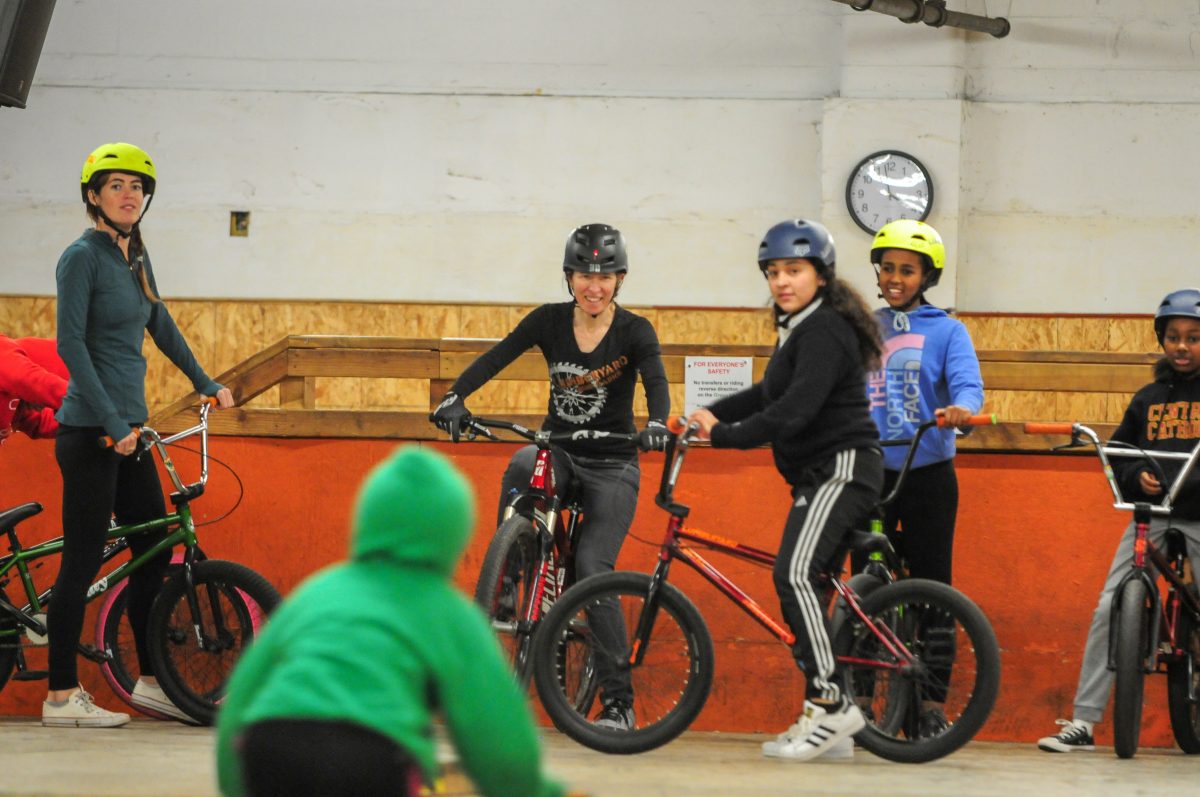 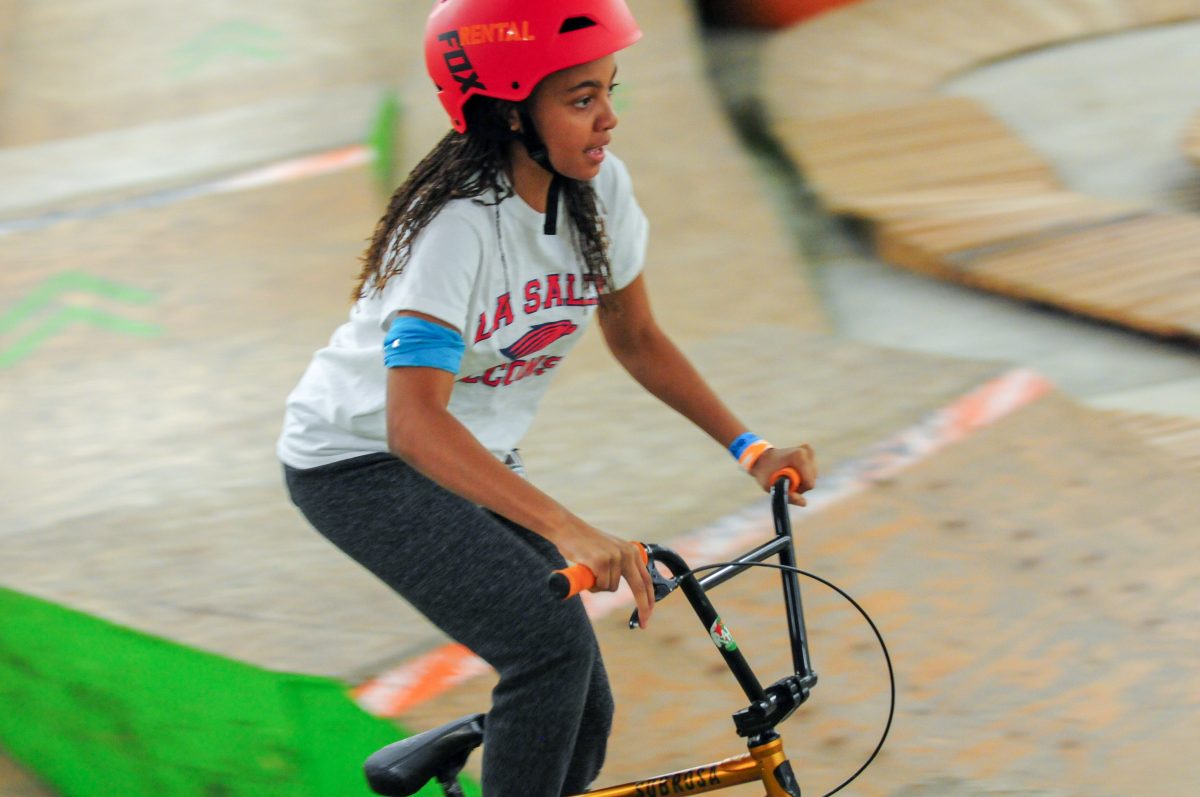 Along with Bothe, the girls were helped by volunteer Sarah Umberhandt and Betties360 staffers Na’ama Schweitzer and Kelsey Ellis. There wasn’t much instruction. Once atop their bikes the girls just wanted to ride.

They had different riding backgrounds and some looked much more comfortable than others. I loved how supportive they were of each other. I watched them tackle the pump track and the “railroad tracks” lines — and even the girls who were still learning how to ride smoothly seemed to love it. Some would bump into walls, others would get their bars all twisted, there were a few crashes. But they persisted. 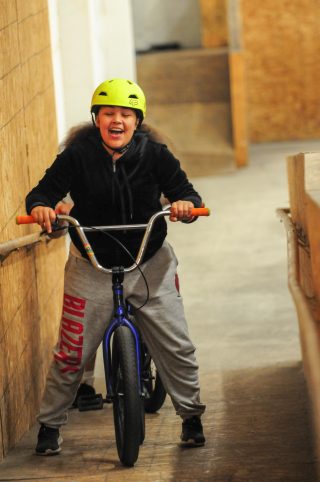 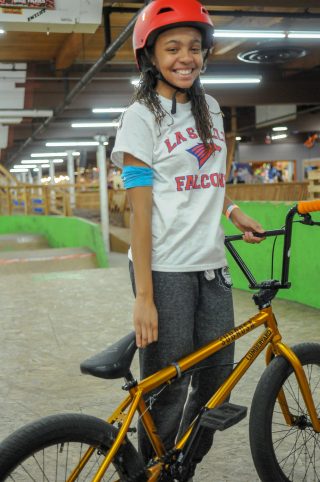 “This can be an intimidating environment for anybody,” said Bothe, the instructor.

I asked one of them what she’d tell another girl who’s afraid to try it. “I’d tell her don’t worry,” the girl said. “After you do it you’ll feel excited because, like, you grow up and progress and do something you’ve never done before.”

Was that you before you did this class? I asked.

As they waited for their turn on the track, one of them told me her favorite thing was, “Coming down the ramp with the feeling of wind on your face.”

If these girls — caught on that tricky precipice of becoming young women — had forgotten how fun bicycling was, I’m pretty sure this class has been a firm reminder that it’s still fun, and it always will be.

“Getting them to challenge themselves, try something new, and make themselves vulnerable is often harder than pulling teeth.”

This sounds like my son. We were at the Lumberyard a couple years ago when an official Lumberyard camp/class was going on (all boys) and the instructor said something to the effect of, “If you do that you get push-ups.” It just oozed football coach bro culture. I instantly knew their classes, at that time, were not for us. I’m very glad to see that this class is happening and perhaps it will show the powers-that-be that there are a variety of riders, most of whom probably don’t fit in with the bros.

Geesh. It was a nice post about young ladies having fun on BMX bikes. Was this comment really necessary?