Get Joel a Tooth! 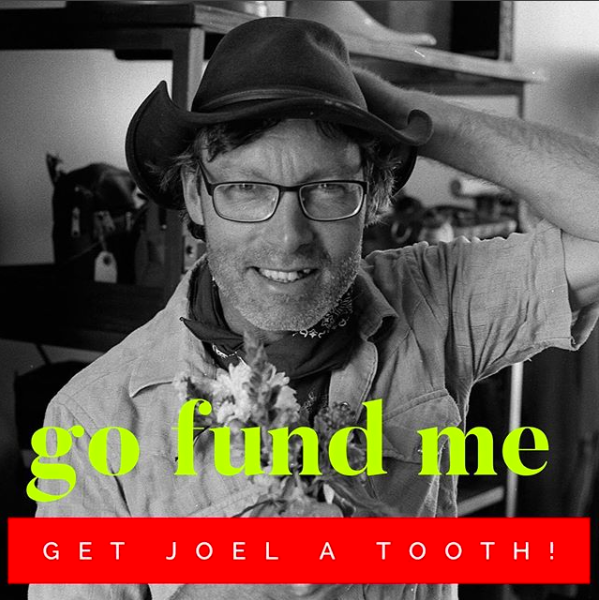 Friend and Rivelo shop regular Joel needs a new front tooth, and we’re hoping to raise the necessary funds to make that happen. If you’ve been to Rivelo, you may have met Joel.

When Joel was still a teenager in Florida, he crashed his VW Microbus and sustained a closed head injury that left him in a coma for almost a month. After he emerged from the coma, the trauma to his brain had unfortunate and lasting consequences. Joel’s memory and ability to concentrate were severely impacted, and he has not been able to maintain regular employment because of it. The State of Oregon awarded him permanent disability status a few years ago.

Joel is a friendly and helpful guy who has spent the last 15 years volunteering in Portland at The Friends of Trees; The Street Trust/Bicycle Transportation Alliance (where he was named Volunteer of the Year); Food Not Bombs; and Cycle Oregon…to name but a few.

Joel’s volunteer work continued through a period of homelessness, during which he was living in his van. He now has his own studio apartment, but he has not forgotten this time in his life. I recently saw him on a well-traveled bike path with his portable repair stand set up, fixing bicycles for homeless cyclists. Classic Joel.

His monthly disability check takes care of most of his basic expenses, but it doesn’t begin to cover something like a dental implant.

We’re hoping that if all of our regular Instagram and Facebook friends and followers make a donation, even a small one, the cumulative cash will mean we can send Joel to the dentist’s office.

Dental procedures like the one that Joel requires are expensive, and we’ve set a goal of $6,000 to cover all aspects of the surgery and replacing his tooth.

Please consider chipping in. This is one time when even a few dollars can go a long way toward improving someone’s life.

Great news! Thanks to everyone who has donated so far.