We talked to over 100 people about making Better Naito permanent 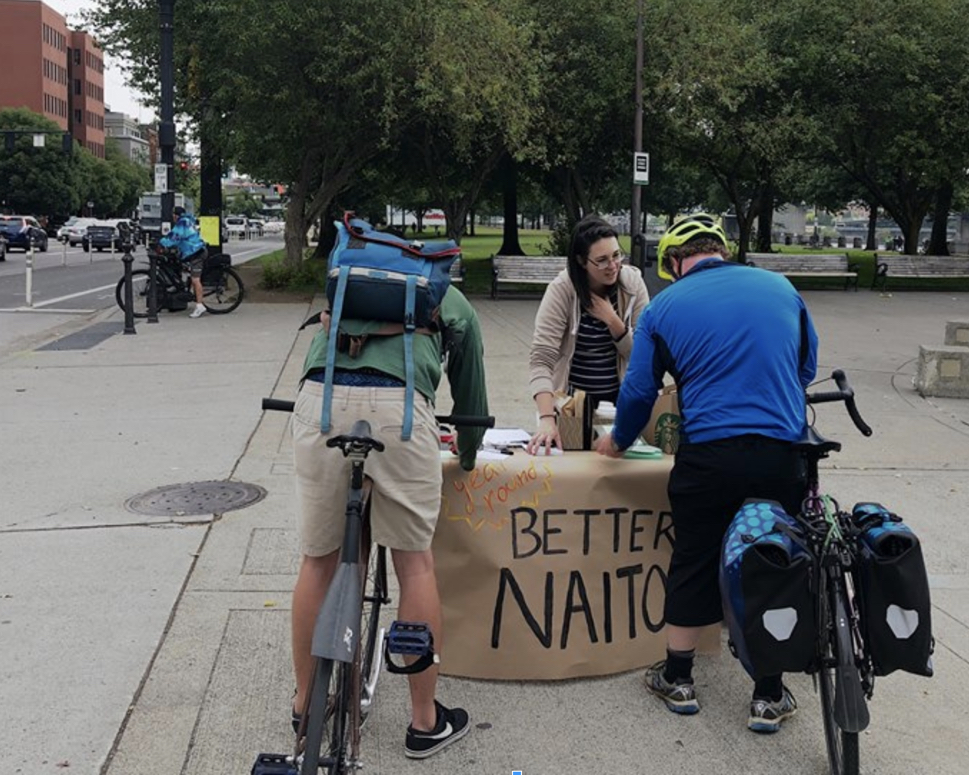 It was hard not to feel a wave of optimism about biking in Portland after talking with so many people who wanted to support this project.
(Photos: Armando Luna)

This is the latest installment of our Adventures in Activism column, written by Catie Gould and Emily Guise.

“People told us about how Naito got them biking more, and how they change their route after it closes.”

For a full week last month, you might have heard this appeal from volunteers from BikeLoudPDX at the Salmon Springs fountain. They were there during commute hours to talk to people about a permanent Better Naito. We just concluded the second year of the city’s seasonal installation — which makes less sense every year as we talk more about needing a connected, low stress bike network.

The night before the week of tabling kicked off I had a hard time sleeping. I had not done much of this type of thing and I was unsure how it would go. Are people sick of hearing about Naito? Are we wasting our time trying to get it installed year-round while a permanent design is in process?

My worries turned out to be unfounded.

On the first day as I was setting up our table someone stopped by asking where they could sign. That trend continued every morning as someone came over within minutes of our arrival. For as long as we were there each day, a steady stream of people stopped to sign. Not everyone had heard of “Better” Naito or that it was only seasonal. People told us about how Naito got them biking more, and how they change their route after it closes. What connected all these users is that they love this lane, and they want to use it year-round.

I don’t usually find myself downtown during the day so it was nice to just be present in the space. We were lucky that every day there was beautiful weather, and lots of people were still using Naito. Traffic seemed pretty usual for anywhere, and not any visibly worse northbound.

As late as Wednesday there were no signs indicating when Naito was going to be removed. One woman told me last year how she had rode right out into traffic like normal, totally unaware the Better Naito had disappeared. She called the city to ask why there had been no signage, worried that someone else could be hurt if they just followed their routine. We couldn’t have anticipated that Better Naito wouldn’t be around the whole week, and must have told hundreds of commuters ourselves that it was going to be removed over the weekend.

Of the 130 people we talked to, we collected just one opposing view of Naito. One man on his bike stopped by to fill out a postcard and told me that Better Naito was awful, and it didn’t work at all. “How so?” I mused, thinking he might be referring to the lack of a zone to make turns in-and-out or people walking across the entire width of the lane. No. That wasn’t it. He said the traffic had gotten terrible. He drives down Naito all the time. Yet today he was biking on a beautiful morning, demonstrating the elusive modal shift of our dreams.

Very few people we spoke to knew about the Central City in Motion project or that a permanent version of Naito was one of the potential projects. With the last online open house already closed, it was difficult to tell people how to get involved in the design process. There is little publicly available information to point them to.

Many people thanked us for just being there to organize some support for year-round Better Naito. In its few years of existence, it has solidly implanted itself with Portlanders who prefer it to the waterfront path or southbound bike lane. It was hard not to feel a wave of optimism about biking in Portland after talking with so many people who wanted to support this project.

I hope our city council feels the same way.

In related news, don’t miss this story in The Oregonian about what the Naito family thinks about the project — even after the grandson of the streets namesake was hit while biking on it.

Thanks, Catie and Emily, for your advocacy for this important route in our cycling network!

When you talked with the various users having to make detours, did you survey which routes were most popular?

It would be interesting to see if the less-experienced cyclists were using different routes than the fearless for avoiding Naito.

It wasn’t something we were specifically asking people, but I would say that of those who mentioned it, most would be going back to the waterfront path.

Thank you Catie and Emily! With construction already underway on the I-405 to Jefferson section (https://www.portlandoregon.gov/transportation/75403?utm_medium=email&utm_source=govdelivery) there will be even more people wanting to ride through that section. It will no longer make sense to NOT have Better Naito year round.

For any readers who might fall into the above category I have plenty of BikeTown credits and would be happy to meet you at a BikeTown station near your car and help guide you safely to your destination. Worst case you’d learn of an alternative to save some $, feel healthier and enjoy life a bit more. If every BP subscriber made the same offer to their friends, family and co-workers the city would be a much happier place.

Wow, Phil–way to put your money where your mouth is! offering up your own creds to further the cause.

I joined up for two of those days and have to echo the sentiment: It was really thrilling and uplifting to be outside next to the street talking to other bicyclists about biking.

I would also encourage folks to get out there and give it a try. See something? Say something.

Vote Up0Vote Down  Reply
« Meet the Team: The Club Roule gets rolling
Promised over a decade ago, Portland embarks on NW Flanders Bikeway project »