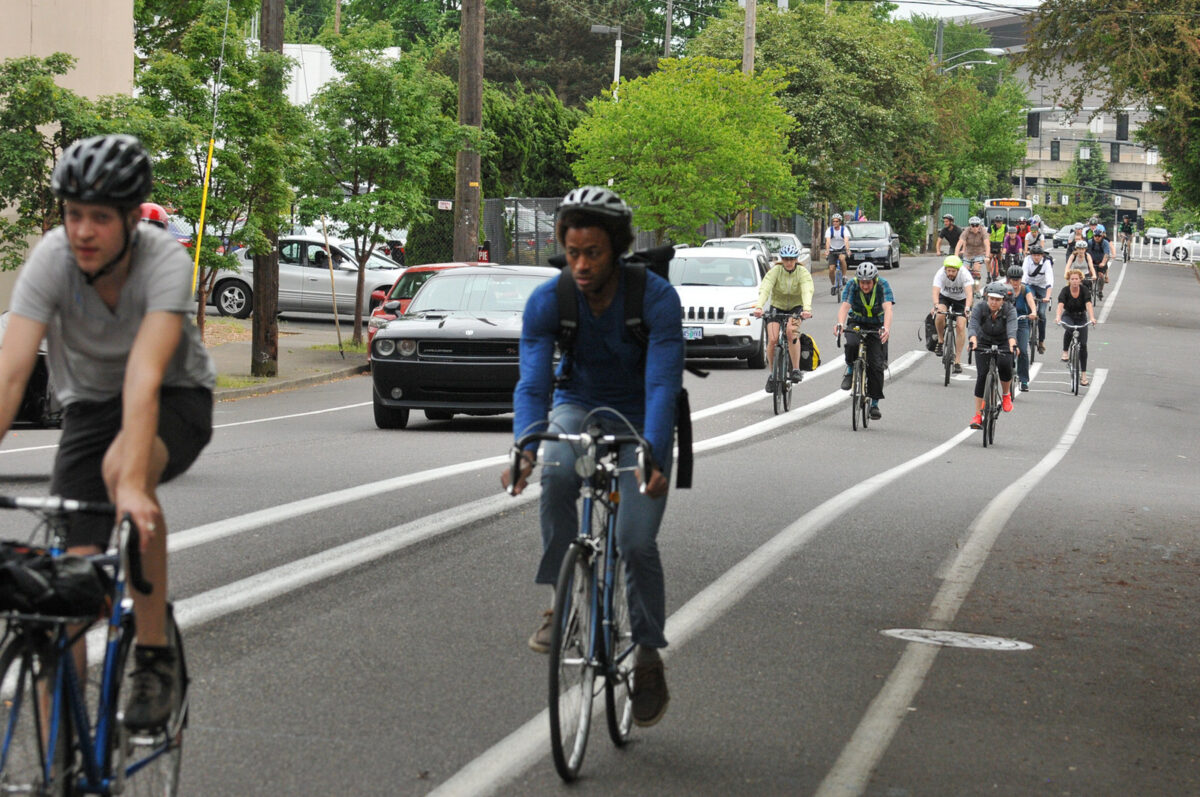 The Portland Bureau of Transportation just announced a repaving project that will require bicycle users to detour off North Williams Avenue for two weeks beginning this Tuesday.

PBOT plans to grind down and then repave Williams as part of regularly scheduled maintenance on a one-mile stretch between Beech and Killingsworth. The project will require lane closures from September 4th through September 18th from 7:00 am to 4:00 pm and possibly on weekends. They also say bicycle users “will be detoured” around the work zone onto an adjacent street.

Streets with ground down surfaces are open for travel. Lane closures are only in effect during project hours. Access will be maintained for businesses and residents during the project. For the safety of people biking on this popular bike route, bicyclists will be detoured onto NE Cleveland between N Beech and N Killingsworth.

Cleveland is one block east of Williams.

Asked about the detour today, a PBOT spokesperson said bicycle users are welcome to share the lane with others if they’re comfortable doing so. The spokesperson also said the advisory calls for a detour for bicycle riders to Cleveland because, “Ground pavement is a rough ride in a car, and we think people biking may be significantly less comfortable on a ground surface. So we advise alternate routes.”

Williams Avenue is the sixth busiest street for bicycle users in the city. PBOT counted 3,835 bicycle trips per day at Williams and Going in 2017.

It’s not clear why PBOT is requiring bicycle users to detour while allowing auto users to continue on Williams. We’ve asked for clarification on that as well as whether or not bicycle riders and other vulnerable road users could share lanes on Williams with other road users.

Ground-down surfaces are not safe for bicycle tires as the grooves can easily catch and channel smaller tires. You’d be fine with wider tires, but my hunch says anything under 40mm would not be very pleasant or safe to ride on.

A very similar project just took place along Cornell Rd. between U.S. 26 and Murray Blvd. The cross-hatch grinding pattern left behind does not necessarily “catch” tires of any size, but the jarring roughness of the surface is very uncomfortable, even at lower speeds around 10 mph. My nominal 32mm tires did fine; it was my 32-cm hiney that had the most trouble.

Biggest thing I’ve had to watch out for on ground-down surfaces are the spots around under-street access points that aren’t ground down, leaving inches-high plateaus of death.

I’m assuming the bike lane will likely be closed as they do the work. Even if it were open, the grooves left after grinding can be a major hazard. Definitely fine for fat bikes and mountain bikes, or for cyclists on skinny-tired bikes who have more experience with rough roads. Ever see those “Motorcycles use extreme caution” signs when they are grinding highways?

Riding a road bike with skinny tires on a ground up pavement is no fun, so I think I’ll be taking N Cleveland for the duration of the project. At the moment the worst pavement on N Williams is actually between N Broadway and N Russell where the apartment construction dug up and re-asphalted the bike lane, but left it quite rough. This happens a lot when developers have to dig through pavement.

Last year when this type of work happened on Beaverton-Hillsdale Hwy there was no detour because it’s SW and alternate routes just don’t exist. Let’s just say riding on pavement in the middle of this type of project is pretty terrible. Two weeks for a grind and pave is pretty fast, when they tried this in SW it took two months (in Spring so weather delays were involved). Unless you enjoy that type of riding taking a detour is the way to go.

They did some of this on a different part of my westside commute. On 23mm tires I would compare it to an improperly loaded dryer on a 3x speed spin cycle, literally teeth chattering at speed.

PBOT should put a stop sign for cars at Beech to allow for people on bikes to cross over the car lane. There is poor visibility at this intersection. -Or a prioritized bike light at Fremont to allow bikes to merge prior to cars starting (I know this is probably to expensive, but it could be permanent, which would make it worth it.)

At least they are sharing information in advance of this project, usually they just show up and start working.

If Williams is the sixth busiest bicycling street, what are the top five? Just curious. 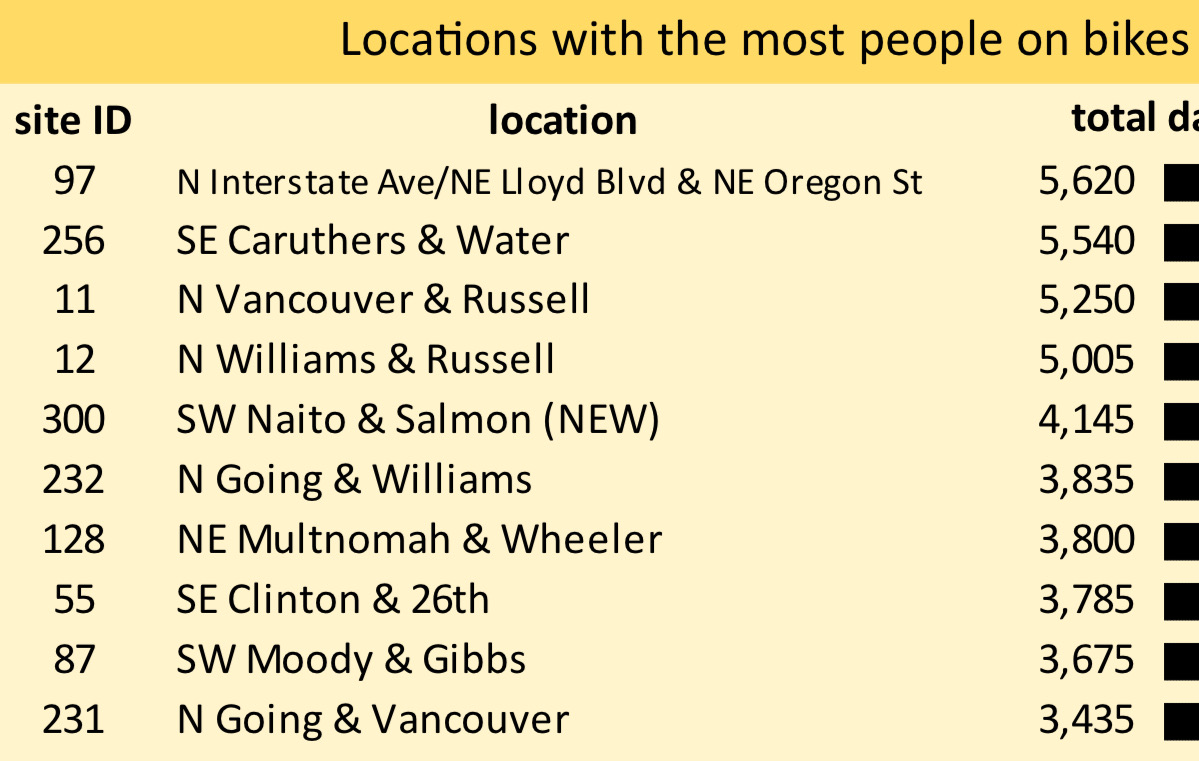 Woo, what’s your source there? Is it the standard “we count for a couple of hours on a couple of days of summer and extrapolate” or something more sophisticated?

First they were going to widen Williams then come’s the bike’s well let’s move on to something eles we haven’t had a chance for any clean air over here since the smoke..Fill the hole dig a hole fill a hole dig a hole…wtf?

Cleveland feels like a bad choice to me; there are a lot of stop signs for cross streets (Failing, Shaver, and Mason) and people park close to the curbs which reduces visibility. The pavement is also pretty rough between Beech and Shaver. I understand that they don’t want the detour route to be too far off Williams, but Rodney is already a greenway, is smoother, only one block further, and has better connections to continue N/S. There also needs to be good signage for drivers on cross streets like Alberta and Skidmore alerting drivers to watch for more bicyclists crossing where there are no crossing facilities.

Also, how are cyclists expected to get onto Cleveland? Make a right at Fremont, then a left across a very busy street? Maybe my nose is too sensitive, but I smell a distinct lack of forethought in putting this detour together.

Rodney south of Russell has been torn up pretty good over the last few months of water(?) projects. It’s a real mess.

Rodney is a much better detour then Cleveland. Only 200’ further away, but with a better pavement surface and fewer stop signs.

Honestly, they should just close the entire road, end to end where the work is and do it. It’s safer for the workers and ultimately faster. The whole idea of trying to work while multi ton death machines are driving through your workspace is dumb.

Despite having owned several “Death Machines” in my lifetime, I’ve never managed to kill anyone.

Good lord. Bikes are going to be forced to cross traffic from the left to go right on Beech, then navigate the jog across Alberta, since Cleveland is not a through street? I’m pretty sure this is going to end badly unless they have folks directing traffic.

Revisiting this since the project is completed. I hope theres a good answer, but I cannot fathom why the lines had to stay in the same place and why the bike lane has to stay where it is as opposed to a protected lane like we see on Rosa Parks. For such a primary stretch of road, I’m amazed and how frequent close calls happen to me or adjacent riders. The parallel parking a full lane width away from the driving lane causes some quick impulse merges and sudden brakes from drivers, and pushes cyclists into the primary driving lane. Amongst all the other hazards that road sees for riders..

From my point of view there was a blank slate to paint in some protection! Many days I end up finding an alternate because its just too chaotic sometimes.