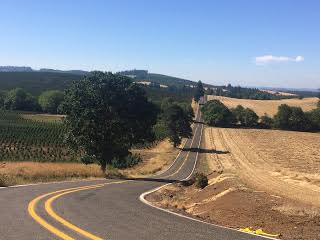 A sampling of the route.
(Photos by Maria Schur)

Maria Schur, a.k.a. “Bicycle Kitty” is a Portland-based bike lover and ride leader. You might have sampled her handiwork if you did the Pedalpalooza Kickoff Ride. In this post she shares her experience as a volunteer at the Ride to Defeat ALS earlier this month.

I’m not sure whether to feel terrible for Lou Gehrig because he died young from ALS (amyotrophic lateral sclerosis), or because his name has become almost synonymous with this debilitating and often fatal disease instead of for his illustrious career as a talented professional baseball player.

I didn’t know much about ALS before joining the Ride to Defeat ALS last Saturday. 75 miles gave me a lot of time to think about the privilege of good health, and the struggle of the folks diagnosed with ALS and their families. ALS is a motor neurone disease, weakening the victim’s muscles until eventually they’re unable to breathe. It’s always fatal and a diagnosis usually means the patient will die within five years. 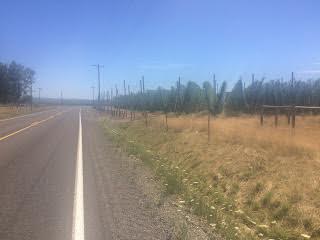 That five year mark is especially meaningful to me. I’ll never forget the day best friend called to tell me he had tested positive for AIDS and just wished to live five years. That was the early 1990s, before the HIV-fighting drug cocktail was invented. He lived almost five years to the day of his diagnosis, at age 30. This may seem like a tangent from ALS, but 22 years later, I still live with the grief of losing a loved one.

Vision Zero also comes to mind. Our aspiration to prevent tragic traffic deaths is highly fueled by the fact that these deaths are preventable, and unnecessary. We all deserve our full chance at hanging around this strange sapphire-colored sphere for as long as we’d like.

This year’s local Ride to Defeat ALS raised over $167,000, exceeding their $150,000 goal. These funds go to supporting programs and care services so they may be provided for free to ALS sufferers and their families. Pretty inspirational stuff.

I’ve participated in many charity rides over the year, and of course, they’re all worthwhile. However, the Ride to Defeat ALS really set itself apart in my mind. First, there was the army of ALS Association volunteers setting up at 5am on event today, so that riders could enjoy breakfast, get a bib number and slather on some sunscreen before heading out into the heat of the day. 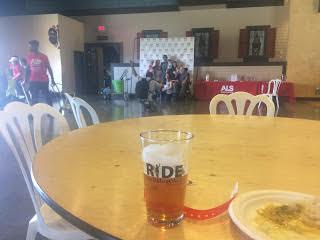 The course was planned and marked by our amazing local event organization, Axiom Productions. These are the fine folks behind our beloved Petal Pedal, Portland Century, Worst Day of the Year Ride, Tour de Lab and many more. The route was absolutely stunning, featuring those stiff rolling country roads we all love.

On course, one could several motivational notes. Each team had a roadside sign cheering them on. Each huge hill had a series of white signs. The first said something like “Fighting ALS”, then “Is like climbing a hill”, finally near the top “Don’t ever give up!”. It reminded the riders why they’d worked hard to raise funds, and why they were pedaling all day.

As designated sweeper, my job was to hang out near the tail of the ride and offer medical, mechanical or moral support to any riders who needed it. The trick here is not to reveal that you are the sweep, as no one wants to know they’re in last place in a ride that’s not a race. I had the privilege of assisting one gentleman, who was riding his first event ride ever. He’d purchased new shoes to try clipless pedals and couldn’t clip out on either side. I was able to catch him, get his cleats tightened and his pedals loosened.

It took just a few small turns of an allen key, but he was grateful.

I spied the same farm stand I had stopped at for strawberries during the Petal Pedal, this time there were one pound bags of blueberries on display. I ate as many as I could without getting sick, and tucked the rest away for later. Roadside farm stands are a favorite roadie delight.

The finish line offered quite a bit of fanfare. First you pass through the great red arch, and there’s a team of folks ringing bells and whistling and cheering. You can’t help but smile. Then a nice lady runs up and hands you a cold wet washcloth. As you enjoy that, another lady approaches and hands you a school lunch sized box of chocolate milk. Finally, they put a small medal around your neck.

The finish line feast, which was served within the Mt. Angel Community Festhalle, included more dishes than I can recall. There were at least five types of sausage, and many pickled things. I ate more bags of kettle chips than I’ll admit in writing. And, of course, there was beer, and souvenir pint glasses, for everyone.

Hi Dave, yes, check out their website, link in article. A great ride and cause!

Some rides just mean more than others. Thanks so much for sharing this.

Odd aside, but there are suspicions that Lou Gehrig died from CTE, not ALS, not that it makes much difference.

Oh yeah. Anyone who gets those spring-loaded pedals I insist they loosen them all the way out and then tighten half a turn at a time until it’s comfortable. I do not understand why they ship race-tight.

“We all deserve our full chance at hanging around this strange sapphire-colored sphere for as long as we’d like.”
Wonderfully stated, Bicycle Kitty!

Thanks for reading, and for the comments!

I regret writing that it’s always fatal and those diagnosed die after five years – that is not always the case! I had based those lines on a quick Wikipedia research. My apologies.

Does everyone here know Maria? If not, but she’s a friend of a friend by chance, go out of your way to meet and make friends with her. Maria is faaaantastic. Fantastic.

I’m afraid I don’t recognize you from your Bike Portland commentator pseudonym, but thanks for the kind words!

Do not let her anywhere near Maraschino cherries. Trust me on this.

I didn’t know about this ride. A dear friend of mine died of ALS just a couple weeks ago. His was extraordinarily rapidly progressing and it was so difficult to see this talented, vital person go through what he did. I’m still reeling, and I will miss him like crazy. Thank you for the story.

This is a beautiful ride for a deserving cause. I rode this year and we joked it was like a tour of Europe. There was a field of sunflowers – France! We passed Mt. Angel Abbey – Tuscanny! There were flower-seed fields Holland! And, yes lots of hops and Bavaria at the end. Even better to know Maria had our backs! Thank you!