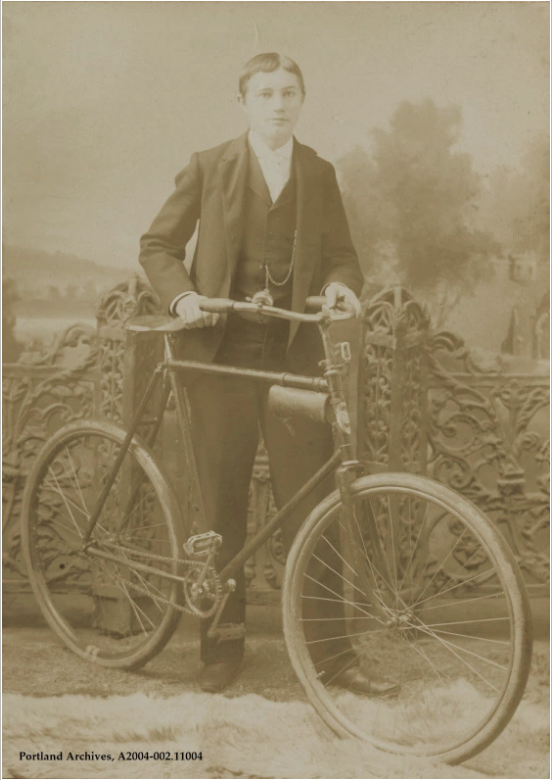 This photo was taken 123 years ago, but the bicycle pictured here doesn’t look significantly different than the single speeds we see tooling around Portland in 2018.

Pretty amazing, and testimony to the perfection of the traditional “diamond” frame.

The link from Vintage Portland, our (other) daily read:

True. And unlike most really, really old bicycles, some really old violins work better than newer ones.

The question of how well older vs newer versions of products (bikes, cars, musical instruments, machine tools, fountain pens, screw drivers, shoes, frying pans, toilets, etc.) is a perennial favorite of mine. Throughout the history of technology, we’ve seen inflection points indicating that the oft assumed linear progress is not evident. Today’s versions are recognizably ‘newer’ but often not ‘better’ with respect to easily identified parameters.

The question of how older versions of products compare, measure up against newer versions is a perennial favorite of mine. Newer versions of bicycles, cars, machine tools, fountain pens, toilets, frying pans, musical instruments, footwear, telephones, etc. tend to appear recognizably ‘newer’ but the question as to whether they are ‘better’ along different easily agreed upon axes is much less clear/more interesting.
Historians of technology note inflection points suggesting non-linear evolution of technologies.

I would say, to quote Joni Mitchell, “Something’s lost, but something’s gained in living every day.”

Cars: New ones are not nearly as much fun to drive, but their exhaust pipes are much easier to pedal behind than the so-called “classics.” Cough, cough….They are also much more rust proof.

Toilets: Not as good as the old ones, but they save water, and the new ones have (recently) gotten better.

Bicycles: We only sell steel bikes. Definitely superior/safer than carbon.

Frying pans: We still have the one Darby got from her Memphis-born mom long ago, and let me tell you, it’s great!

Telephones: I’d gladly go back to rotary IF the rest of the world would, too. I had one as late as the mid-90s, and those “menus” on the other end of the line proved insurmountable.