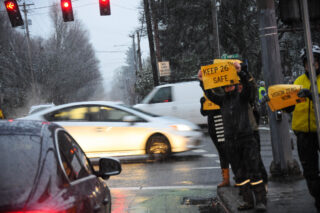 A protest rally on 26th and Powell in February.
(Photo: J. Maus)

In their letter to PBOT Commissioner Dan Saltzman and PBOT Director Leah Treat, SE Uplift Co-chairs Terry Dublinski-Milton and Reuben Deumling say their board is, “Very concerned about the safety ramifications,” of removing the lanes.

ODOT says they feel the lanes should be removed because they’re too dangerous and that a new bikeway on 28th is safer. SE Uplift says using 28th is, “Not viable for commuters heading to the employment zones of the central eastside or points downtown.”

Here’re more from the letter:

“Commuters will take the path of least resistance and SE 26th has functioned as a commuter route for over a generation. It is fast, flat and direct. Thus, the new successful new crossing of Southeast Powell at SE 28th will not provide enough benefits to change behavior of cyclists accustomed to the SE 26th route. Without an alternative in place prior to removal of the SE 26th bike lanes, commuters will continue to use SE 26th, making a dangerous situation worse.”

SE Uplift wants PBOT to pause on plans to remove the bike lanes. And if the City chooses to ultimately move forward, SE Uplift says they should do so only after making 21st Avenue safer so it can be used as a viable alternative.

This project just gets more interesting as time moves forward…

Is the crossing at 28th “successful”? In that it exists, yes, In that it is uphill (both ways!), and takes an eternity for the signal to change, even when volumes on Powell are low, not so much.

I think giving up 26th for 28th was a bad trade. We would have done better to improve riding conditions on 26th. Luckily, 21st (unlike 26th) is classified such that improving the already ok bike conditions there is viable.

SE 21st south of Powell really needs a good repaving to be truly viable for cyclists, otherwise I agree.

OTOH, I think SE 26th is worth fighting for. If the bike facility there is substandard, it should be improved, not removed.

their own bike counts show that people still prefer 26th…

But we must not hurt ODOT’s feelings on this matter.

In the perceived “war” over safer streets… people are still fighting over this? 28th has no choice but to safer as it checks the boxes for less stressful riding as well as less cars. Should there be a cost (in this case, time and a small hill) for safety? Quite possibly.

What? “no choice but to safer..” really confused about what your comment is

That still doesn’t make your statement make any kind of sense..

Maybe you should read it slower?

funny how the “costs of time and effort” are acceptable for people biking (for their own “safety”) but the people driving who cause much of the safety risk must not be delayed or inconvenienced.

i also note that you were dismissive of the concerns of people for whom riding up hills is a barrier to cycling for transportation.

Feel free to share your checklist of what you would rather see. Safe? Convenient? Quick? Feel free to add anything I missed.

You remember that far back? Nice. I also said that we can’t always have everything. So I am eager to see the order of hopeful items that you’d like to see in a bike facility. Thanks in advance.

Personally, I avoid that intersection. I could use it daily.

Still nothing? Come one Soren. I know you can do this.

and why does the bully get to win? why do the very people that make the road dangerous get to kick out the vulnerable users they endanger?

in a logical world we remove the danger, not the victims…

You may be starting to notice that this world is not logical.

No argument from me, but isn’t the question what we do about this?
Shrug, or take off the gloves?

We need a critical mass of people pushing for change. We’re not there yet. I’m not sure how to move the needle.

If the world were logical we would not have petroleum powered motorcars at all. We would have phased them out starting in the 1970’s when we realized how damaging they were to continuation of life on earth.

Who’s the bully? Did you miss the open house where it was already decided upon before the meeting took place? Welcome to Portland. The danger was removed (26th) and replaced by the safer 28th. The problem is that people don’t prefer it but in terms of the safe streets that many people want, it fits the bill. Diverters included.

Buzz
SE 21st south of Powell really needs a good repaving to be truly viable for cyclists, otherwise I agree.

The unintended consequence of this is that cars, like an invasive virus, will find new pavement and start using it in greater numbers (and speeds) to cut around Powell too.

The road, as it is right now, is actually not all that horrible. What’s best about it is if you’re heading north. There’s a 2-3 foot wide strip of newer pavement from a sewer reconstruction project that is pretty smooth. Everything else around it is junk. Too small for a car but perfect for a bike. It’s in the middle of the lane so it sort of forces you to rightfully take the lane.

Keep fighting! I believe persistence will eventually pay off in this extended battle with ODOT.

This would’ve been a non issue if the MHF was in place. Separated cars lanes means more bike friendliness everywhere else.

Really? There’s a ring of highways surrounding downtown, but I wouldn’t call downtown “bike friendly.” Manufacturing facts does not make them true.

I guess that would be to the eye of the beholder. I bike downtown daily. I would hate to see I-5 or 84 shut down for any length of time. I sure you would too. Just because you have a cool phrase to toss in doesn’t make it accurate.

ODOT’s unspoken priority is to make it easier to move heavy freight and commuter traffic on SE 26th–a collector lined with residences and a school. UPRR expansion has put huge pressure on surrounding neighborhoods, completely changing the ped/bike and driving experience on SE 26th and other streets. I suspect UPRR has been putting pressure on ODOT to remove the bike lanes. Their trucks don’t even fit in the traffic lanes. Why PBOT caved, I have no idea. Never made sense to me. Exasperating!

Love how you put it, Jonathan–“…they planned to cash in an agreement wrung out of PBOT over the lanes…”

Thanks Everyone. It was unanimous at both my LUTC and full Board presentations.

If 21st is built as a replacement, before 26th removal, it would need to be protected bike lanes of some form……after repaving. This is all about funding. The most recent communication from ODOT states that current plans for 26th include removing the bike box and bike lane symbols, but leave the three foot shoulder “for those who want to use it” plus adding lead pedestrian crossings and banning right turns on red.

I will follow up with PBOT as the 21st alternative is all about allocation of a half million dollars as the project is on the tsp for the near term.

Leaving a 3ft “shoulder” on 26th would be a terrible outcome. De-facto bike lanes, but without any official recognition, would essentially create a wider and faster street, making it a much more hostile environment than it is today. If the bike lanes are removed, we really need to lobby for parking to be restored to both sides to narrow the roadway and limit vehicle speeds.

Vote Up0Vote Down
« A “Bike Fun Library” is in the works, just in time for Pedalpalooza
A Paul Bunyan-themed Biketown bike? Your vote could make it a reality »