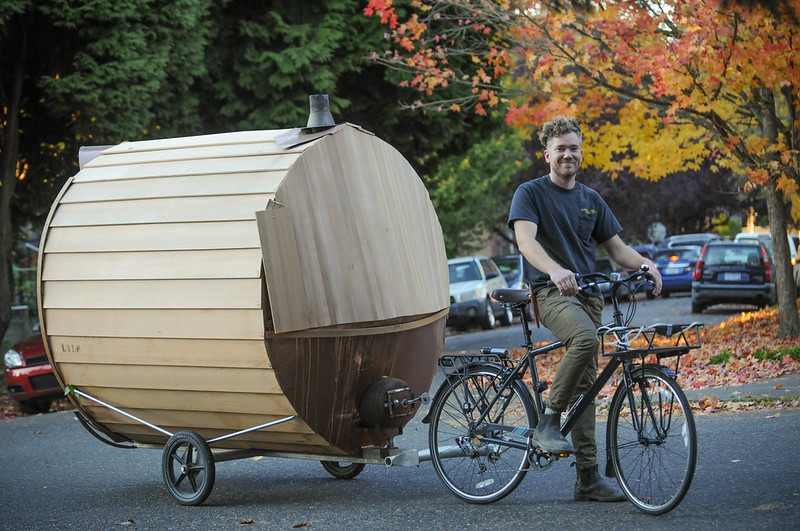 Powered by leg muscles and fire, the SaunaVelo is the manifestation of many passions for southeast Portland resident Simon Lyle. At its core, the cedar wood structure that sits atop a bicycle trailer is simply a place to warm up. But it’s also a mobile community builder. After all, it’d be difficult to enjoy its warmth — usually done wearing only your skivvies — without getting to know the people huddled next to you.

For Lyle, the 37-year old builder who grew up near the Buckman neighborhood of inner southeast Portland where I met him yesterday, the SaunaVelo is a fun side-project. But it’s also much more than that.

“I’m obsessed with old wooden boats,” Lyle shared with me as we sat on the long benches inside the SaunaVelo. Several years ago he came across a photo of a sauna bike built in Prague, Czechoslovakia and thought to himself, “I could build that!”

As he began to draw up plans and gather the parts and materials for the subframe, ribbing, and wood stove, Lyle began to realize that a small structure with heat could have other uses. As a kid he hung out at St. Francis Park on SE Stark and 11th where his dad worked for 20 years as the maintenance supervisor for the church and apartment block that used to serve thousands of homeless Portlanders. “Witnessing how those people lived was a huge wake-up call for me,” Lyle shared. 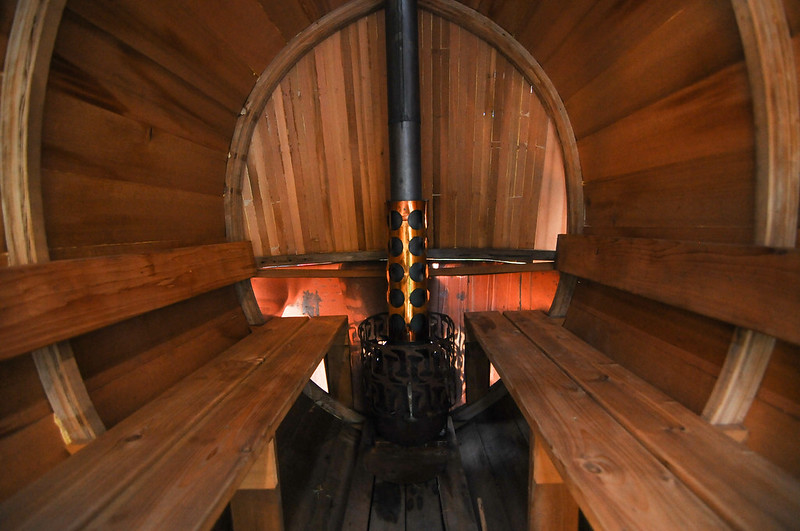 Interior with the wood stove and copper fire shrouds at the far end. 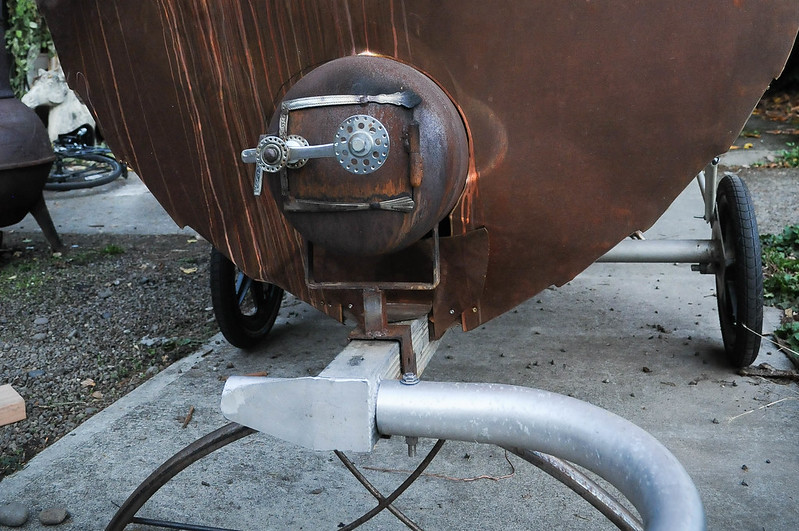 A look at the trailer and hitch set-up below the custom wood door (yes, those are utensils). 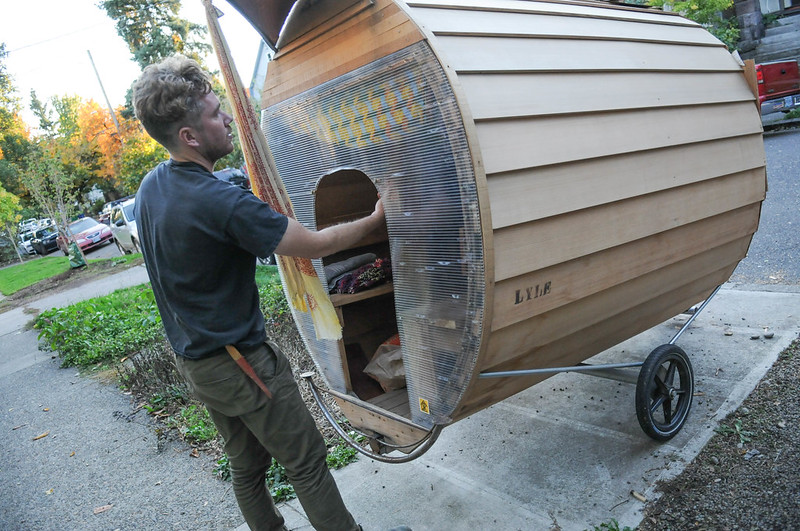 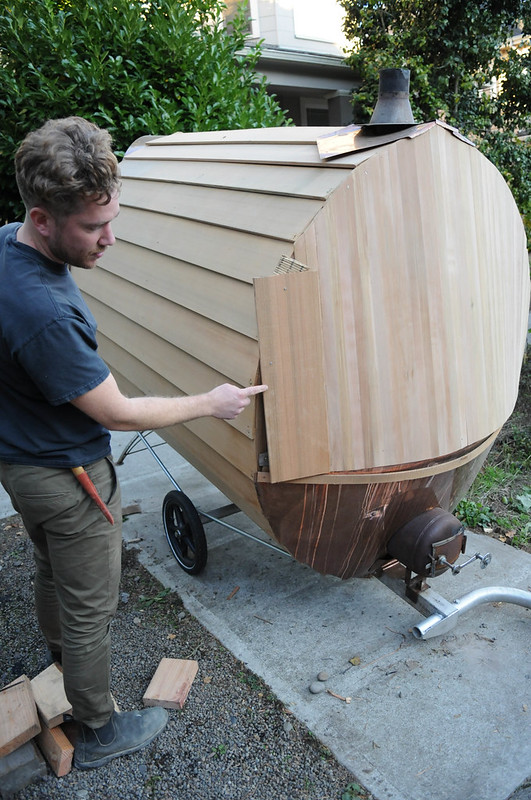 Oops! This is where he banged the side on a bollard while biking on the Esplanade. 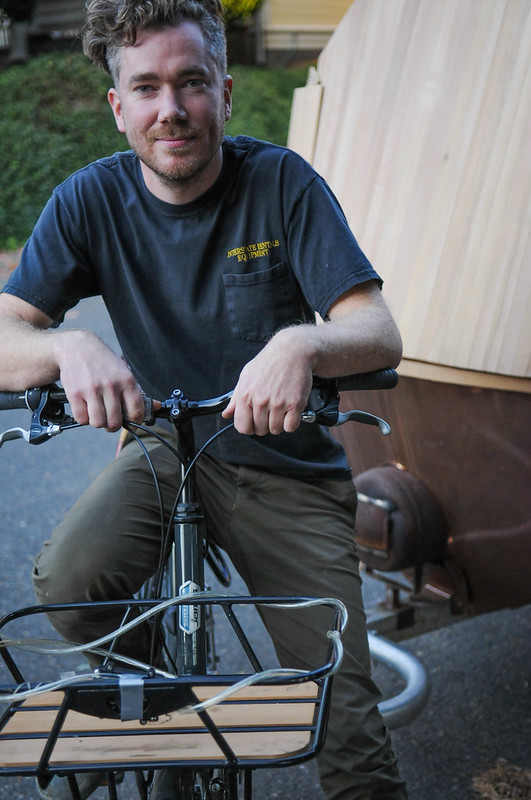 “My favorite comment was when someone said, ‘I don’t even know what that is, but I like it.'”
— Simon Lyle

A product of Portland Public Schools, Lyle got into the building trades and was mentored by local housing developer (and Portland Planning Commissioner) Eli Spevak of Orange Splot LLC. Now co-owner of his own construction company (along with his brother Rion), Lyle specializes in residential projects, tiny homes and accessory dwelling units (ADUs). One of his current projects is the Clackamas County Veteran’s Village. “At first I wanted a sauna,” he said yesterday, “But I also wanted a solution for sleeping in the streets.” Staying warm in a tiny house is tricky because insurance companies don’t allow heating elements, so Lyle hopes the heating lessons he’s learning with the SaunaVelo can be applied to other projects down the road. 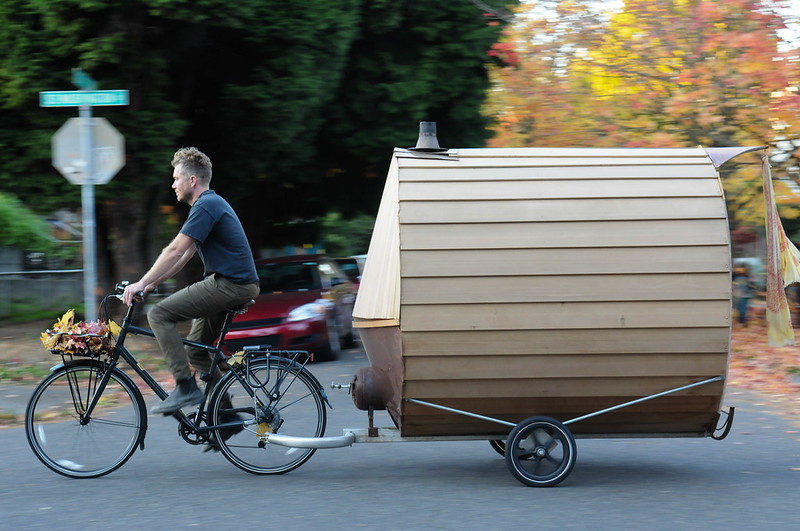 At about four-feet-wide by-six feet tall, the SaunaVelo just barely fits through the bollards on the Eastbank Esplanade path. Lyle pointed out repairs he made to the right corner after smashing into one of them over the summer. With an estimated weight of about 200-300 pounds it has an 800 pound capacity. Lyle said eight people squeezed into it at its debut event at Pedalpalooza over the summer.

The roof of the pod looks like the hull of a boat with overlapping cedar shingles glued together and held in place by ribs. The small stove was made from an old air compressor and is fed via a door on the outside of the pod above the trailer hitch. A steel pipe welded to the stove sticks out the top and acts as the chimney (and as an “open” sign when smoking that draws people near). Lyle made the trailer bed himself and purchased the wheels and hitch mechanism from Bikes at Work. He tows it with his five-speed Jamis Commuter bike, although he’s looking to upgrade to electric-assist to help him pedal it further afield.

Lyle wants to build more SaunaVelos. This first one cost him about $2,000 in labor and materials and he figures he could bring the price down considerably on future versions. He envisions people might rent one or perhaps even do a “Sauna share” with friends where everyone pays dues like a co-op. And with Portland’s new approach to RVs and tiny homes, a structure like the SaunaVelo can be legally lived-in as long as its parked on private property.

Legalities aside, the SaunaVelo is anything but private. Like many of his creations, Lyle said its design was partly influenced by the work of people like Mark Lakeman who founded the City Repair Project and Communitecture. Community building through small-scale architecture is at the heart of Lakeman’s legacy.

“At the root this is about getting to know your neighbors,” he shared. “I’ll fire it up on Fridays and everyone in the neighborhood will gather around it. My favorite comment was when someone said, ‘I don’t even know what that is, but I like it.'” 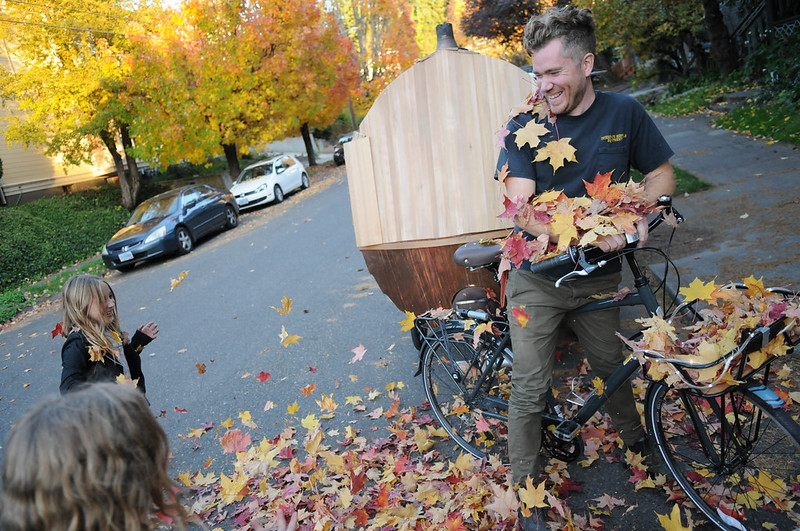 Check out more of Simon’s work at BornAndRaisedConstruction.com and follow the SaunaVelo’s adventures (including a recent run-in with police in Ladds Addition) via Instagram.

Cooks BBQ too. Just kidding, but…

Not bike powered. Transported by bike, powered by a wood stove.

Glad you saw this.

And I didn’t say the heat was powered by the bike… just that the whole contraption uses bike power in its operation. And IMO there’s also an element of bicycle inspiration – and thus “power” – behind the entire project.

Seems like a great idea for the first annual “put a name to a face” bikeportland social.

There were lots of kids that enjoyed sitting in that sauna during the Cargo Bike Roll Call ride for Pedalpalooza. It put a big smile on my face.

I really like the idea of profiling individuals that do fun or interesting things with their bikes here in Portland.

That must be a real bear to tow up any kind of grade — do my eyes deceive me or is he moving that thing with about 42×32 gearing? On the plus side, I’ll bet the motorists cut him more space.

While I’m noticing interesting details in images on the page, I must admit seeing a NASCAR fan in the BP banner made me smile. Aside from that the fact that the Ladd’s 500 borrows its graphic inspiration from NASCAR rather than the series that hosts the Indy 500, only a NASCAR fan would modify the Tide Ride logo in that way or be rocking Junior’s number 🙂

In all fairness, the Tide Ride drivers have been regarded as the highly regarded and cleaner drivers in the sport for decades, no pun intended (who am I kidding).

Plus, Craven’s first career victory over bad boy Kurt Busch at Darlington in 2003 was one of the finest in automotive racing history. But it would be hard for anything to top Harvick taking Gordon at the line in 2001 (never saw so many tough guys bawling after winning in my life) — the only way not get misty eyed over that would be to hate cars. Oh wait… 😉

Simon is awesome, and that mobile sauna is so beautiful, and smells good! That’s not condos over there at St Francis Park, but really great apartments the church built for survivors of domestic violence and homeless people to get a foot up and transition to a better situation. http://blog.oregonlive.com/business-watch/2017/05/saint_francis_park_apartments.html

Brakes… It needs better brakes to be safe to peddle…

I go really slow up and down the hills for sure. I need an xl bike that can help me get around easier and safer. what do you suggest? It needs to have room in the rear triangle for the Bikes at Work Mounting Bracket.

Depends on your budget. But for starters, you need much smaller rings up front. An MTB 22/32/44 triple crankset will give you a cheap and dramatic improvement, especially second hand. The biggest and hardest ring on an MTB triple is closest to what you have right now and the smallest is *way* easier. You’ll need to buy a shifter, but those are cheap — just get a friction thumb shifter for a few bucks.

The second thing you could do is put a much bigger cassette on. Likewise, that won’t cost you much. You will probably need a new RD because of chain wrap. Consult Google or bike geek friends if what I’m saying doesn’t make sense. The bigger cassette won’t make nearly the difference that the rings will, but it will still be very noticeable.

None of these things will affect your ability to mount anything else. There are other things you can do, but the complexity and cost factors go up dramatically. These things I’m talking about can be done in minutes for cheap.

Now that I think about it more, you should get a friend to help you with this if you haven’t done this kind of work before. It’s not hard, but it requires a few tools and bits of knowledge. If you do it blind, you’re likely to make mistakes that make it economically inefficient compared to just paying someone to do it.

For consulting on proper equipment choice and installation assistance, three beers each for the front (rings) and rear (cassette) improvements respectively strikes me an appropriate thanks for the help and technical education.

For going downhill, I’m not sure the rig you have can be modified effectively.

You need discs for sufficient stopping power and I don’t think your bike can be altered to take them. Discs send all the braking force through the axle so the wheels and fork need to be stronger than they do with pull style brakes.

Moreover, the downhill problem you have to do has to do with the weight of the sauna — even if you have awesome brakes on the bike, it’s going to want to overtake you and jacknife. This means you want braking power on the sauna itself. You may be able to rig some bicycle disc brakes for your trailer but fabrication will be necessary.

Chris I
Reply to  Simon Lyle

A XL surly big dummy would work well. It positions the rider more forward, which would balance out the bike a bit better. And it has disc brakes. Ideally, you would find one with e-assist, but that does add cost.

Thanks Isaak. I regret making that error and have deleted reference to condos in the story.

Great project! Did you measure the max temperature this sauna can do?