The Ugly, the Bad, and the Good of Bike accident economics 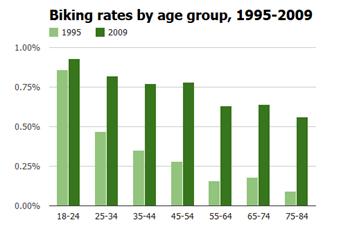 I only have week to go before I can get on my bicycles. I am not just looking forward to the naked bike ride but really looking forward to rolling through the air on my two wheels. The Why: the accident, the surgery, the recovery are my personal equivalent to the good, the bad, and the ugly in reverse order. I had shoulder surgery on Mar 24 and my orthopedist-surgeon told me multiple times you cannot bicycle for three months.

The cost of a bicycle accident triggers many thoughts about dollars, aging, and attitudes. The top muscle (supraspinatus) was completely torn from the bone. With age, this muscle (as well as many other ones) develops micro-tears. As one ages, more tears become larger, pain increases, and accidents have greater consequences pushing up the cost of medical treatments. For me it was simply a fall-over with a cargo bicycle caused this big rip.

Citylab.com published an article by John Metcalf at the beginning of June describing the increasing costs of bike injuries. He stated that there has been an increment of a 120% ‘bump’ in hospital visits featuring bicycle crashes since 1990. More than 800 deaths from car-on-bike crashes occurred in 2015 in the US. He reported that a serious non fatal ‘accident’ in 1997 cost an average of $52,495 which included medical expenses, missed work, and reduced quality of life. This figure jumped to $77K in 2013.

Metcalf went on to report that the total bike injuries costs have increased nearly $789 million per year from the late 1990s and to near total of $24 billion in 2013 (yes 24 billion). Additionally, there are more older-cyclists. There were nearly 2 million bicyclists in 2001 over the age 45 and in 2009 this number reached 3.6 million. I could not find the number of these riders in this decade. Federal data shows biking rates among people between the ages of 60 and 79 are soaring. ‘New trips by seniors account for 22 percent of the nation’s growth in adult biking,’ according to People for Bikes. Growth rates of older bicyclists are larger than younger age groups of new bicyclists.


The caveat is health care related crashes: with age, being over 50 years of age doubles the risk of injury and greater medical expense from a non-mortal bicycle crash.

When we look at annual US automobile related deaths it is hovering near 37,000 people per year. Additionally, some 2.35 million are injured. Of the 37K deaths, 8000 are aged 16-20 years old. Non fatal road crashes cost an annual total of $230.6 billion per year for the US. The global perspective is 3200 deaths a day totaling 1.3 million people dying worldwide annually in automobile crashes.

While the crash data of 800 cyclist deaths is dramatic, there is a high cost of not bicycling. Sitting on a couch is a more frequent road to early death. 635,000 deaths occur annually due to cardiac disease; 795,000 people have strokes each year. American Heart Association lists seven factors for cardiac disease in this order: Smoking, Physical Activity, Healthy Diet, Obesity, Cholesterol, High Blood Pressure, Diabetes. One must also remember that exercise does not cure all and the genetic inheritance of heart disease is present for many. But when one compares almost 800,000 deaths due to unfavorable cardiac disease factors versus 800 due to street crashes, the risk of sitting on the couch is much -much greater in my mind.

Another approach is to look at the ratio of injury costs and miles traveled. “…injury costs per mile ridden in the U.S. have dropped from $2.85 in 2001 to $2.35 in 2009. That basically means that miles ridden are increasing faster than costs due to injuries,” says Thomas Gaither-co-author of Soaring Medical Costs from Bicycle Accidents. 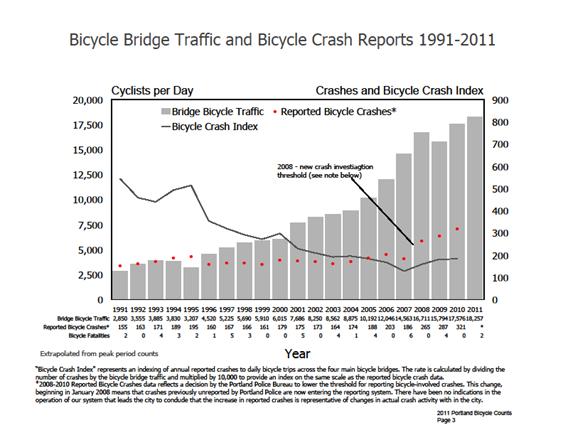 Above, our own Portland’s last decade shows the dramatic growth of bicycle use on the streets with low growth of crashes over many years. My mantra still affirms that it is better to be outside and active than sitting on the couch. I wish I could have found an updated graph of the past 6 years to include.

What was my cost? In my mind, the biggest cost was 3 months of no bicycling. I was completely caught off guard by how slowly I healed. I had thought that on the second day after the surgery I would be walking around the block. But I ended up sleeping the day away; I ended up napping 3 to 4 times a day for the first week. I slept in 20 to 40 min increments; the narcotics didn’t do much. My dear friend brought over another’s friend’s recliner which I occupied about 20 hours a day. My first shower after the surgery hurt so much I had to recite the alphabet to keep my attention somewhere else other than screaming at the pain. Intellectually, I knew what to expect: pain, sleeplessness, groggy cognition. Finally, I walked but didn’t really get started with first block until the end of week 2. It was a shock to find myself in a lot of pain and no energy. The second self-image cost was doing the physical therapy: it generates a bit of pain and the pace of increasing the range of motion seems measured in millimeter gains over a week not a day. Again, I fit the paradigm of the older you are~ the slower you heal.

In terms of dollars, we are near 27,000 dollars and my Physical Therapy visits are $312.00 per 45 min sessions. Thankfully, I have Medicare and savings. This is not a plea for help. I am lucky.

The other silent cost is a new wave of being conservative. My dear partner says, don’t do too much, that’s dangerous, you can’t bike in the Gorge or the Deschutes River trail yet, it is too slippery, watch out for that crack in the sidewalk, don’t walk and use your phone…and given the pain and claustrophobia from not bicycling for almost 3+ months, bicycling has become a little more precious. “Freedom’s just another word for nothin’ left to lose” but losing 3 months has not made me more free. Given that I have bicycled since age 7, have crossed the US and biked many other long distance trips… I have no interest in compromising future cycling. And I am wondering how much those collective voices of ‘be careful’ will be whispering to my ear from my shoulder’s perch. Will this stunt my bravado? Come the 24th of June I may not be nude but I’ll be hauling down the Springwater again. With many smiles. And a patch kit. Join me at Splendid Cycles 10 am and we will tootle to Oaks Bottom and back. Healing wing and all…We’ll see how far I can get.

I have no insurance – obamacare policies are too expensive and I don’t want the subsidies which are welfare. I had good insurance before obamacare. Yesterday as I rode in the bike lane on TV Highway and Brookwood with high speed traffic whizzing past and as I crossed many turn-out lanes into driveways and side streets, I knew I could be hit by a car. I hoped that if that happened the driver would have good insurance to cover my injuries. But I realized the fair probability that in Washington County, and increasingly everywhere in the US, that I’d be hit by an uninsured immigrant. I’ve heard of it happening quite a bit – not to bikes but to cars, pedestrians, etc.

Our immigration policy and refusal to enforce the immigration laws is putting all cyclists and everyone else at serious risk.

We elected a president who wants to help solve the problem and all he gets is constant resistance from the media, liberals, mayors, governors, city councils, the deep state, RINOs, activist judges, etc.

On your statement: “But when one compares almost 800,000 deaths due to unfavorable cardiac disease factors versus 800 due to street crashes, the risk of sitting on the couch is much -much greater in my mind.” We’re all going to die of something and 800,000 is out of 330,000,000 whereas 800 is out of how many cyclists? A lot lower number. You are correct – being active does reduce risk of cardiac disease; but even active people die of cardiac disease. And depending on what you do to stay active, that can introduce risk. Also, you can swim, walk or run instead of cycling and that would reduce your chances of being hit by a car.

Getting hit by a car is probably one of the lesser threats. Over here in Bend, mtb crashes are rampant. I have talked to ER docs and others who say the rate is just amazing. Four of my friends crashed in the last two months, two had broken collarbones (one multiple breaks), one had a strained shoulder, and the other tore his rotator cuff. These are significant injuries if you are over 50. I know this is sacrilege, but it is very hard to justify, at least economically, riding off-road, if you are older. I still ride off-road, but I put on a rigid fork, to slow me down on the descents. You just have to admit that you do it because you love it, but it might not be a wise life choice.