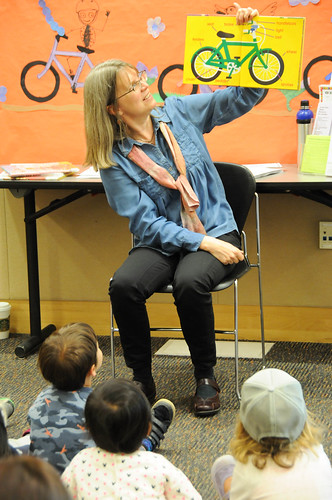 The City of Portland and Multnomah County Library (with an assist from Metro) have teamed up on a novel way to promote National Bike Month: They’re hosting an art contest with a grand prize of having the winners’ design installed as a bike lane character.

Ever notice how some of the bike lane symbols around town have extra special flair? Some are subtle little twists and others are nothing short than a work of art. It’s a tradition that the Portland Bureau of Transportation started back in 1999. And now four lucky young Portlanders will get a chance to have their vision turned into a piece of infrastructure.

The “Bike to Books” program kicked off this morning at the Hillsdale Library. With the library’s book bike (more on that later) parked in the entrance, over a dozen pre-schoolers were treated to a special, bike-themed storytime. Youth Librarian Barbara Head kept the kids entertained (no easy task at that age) with bike books and bike-themed songs. It’s all part of an effort to get people of all ages to bike to the library during the month of May.

Any Multnomah County resident in kindergarten to 12th grade can grab a coloring contest flyer from a library or online and give it your best shot. The contest is open all month long and entrants must return the finished art to a library branch. Four grand prize winners (one for each age category) will get their bike lane art installed. The second place prize is four passes to The Lumberyard Indoor Bike Park and third place gets a Nutcase helmet.

Also during the month of May, anyone who rides to the library gets a free blinkie front light thanks to Metro. 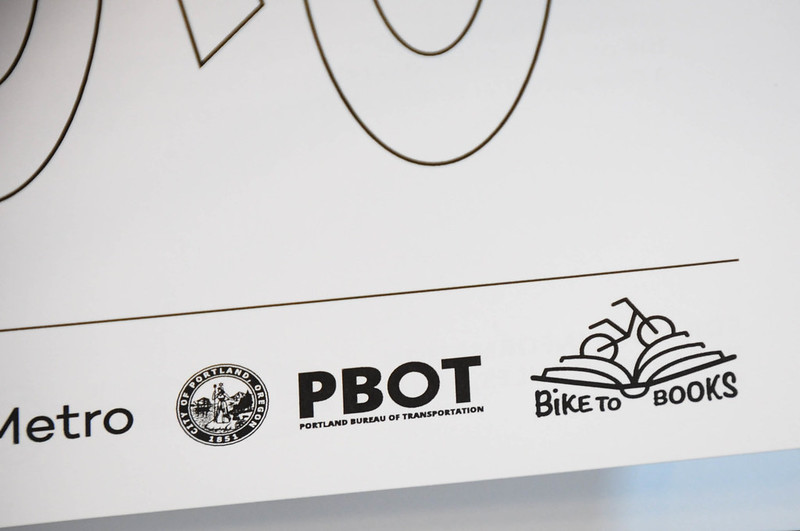 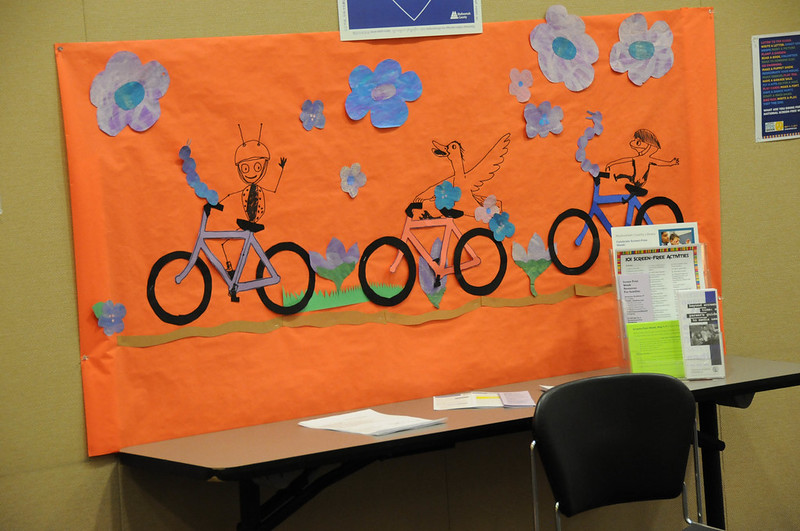 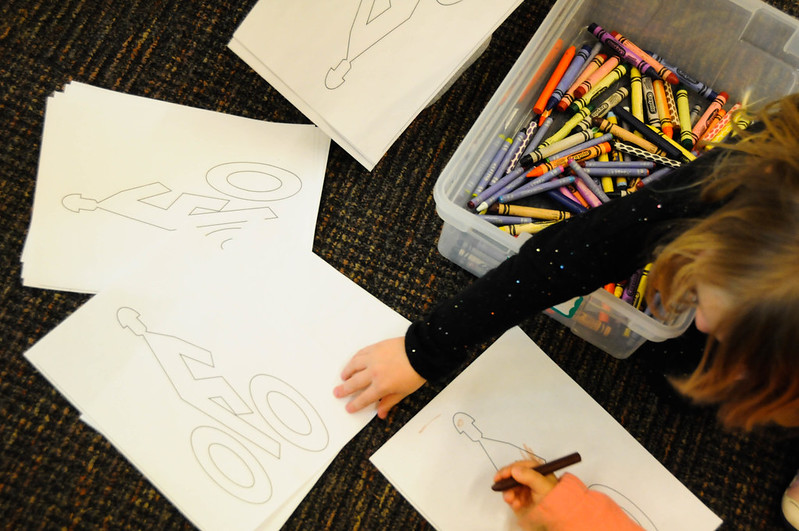 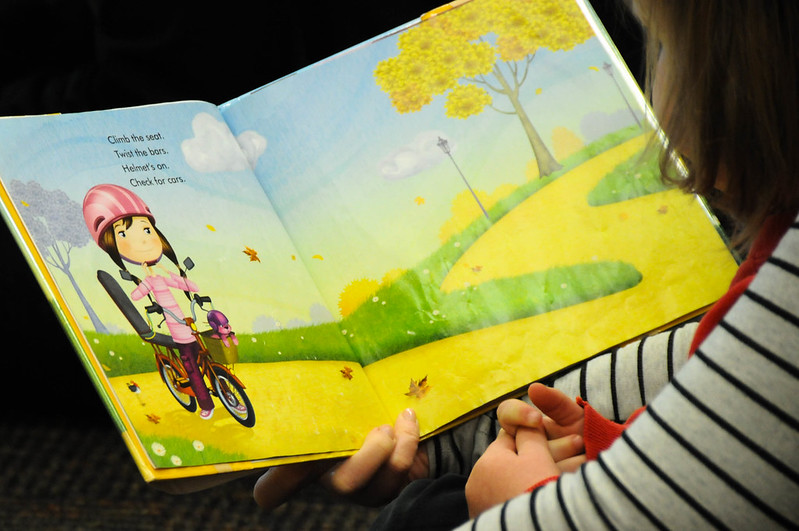 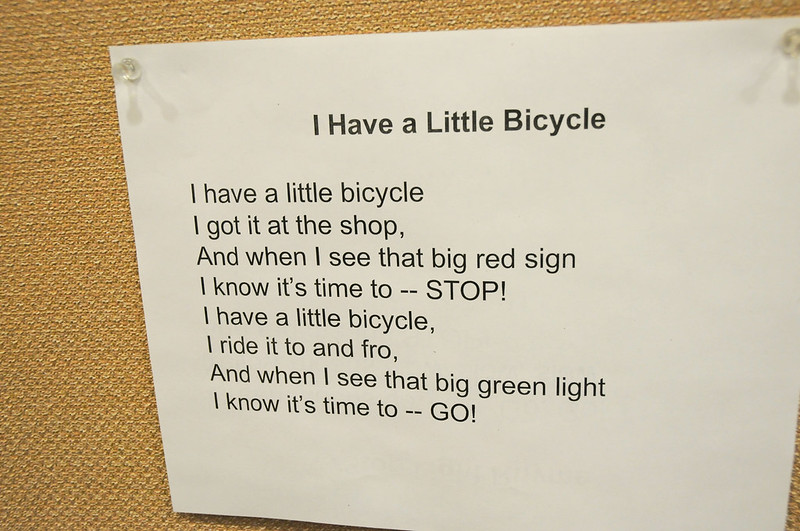 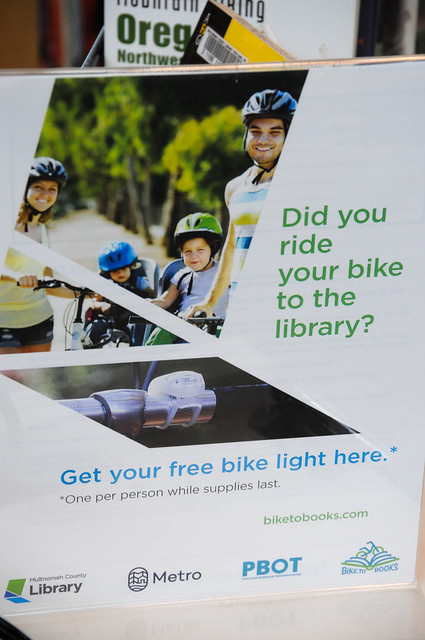 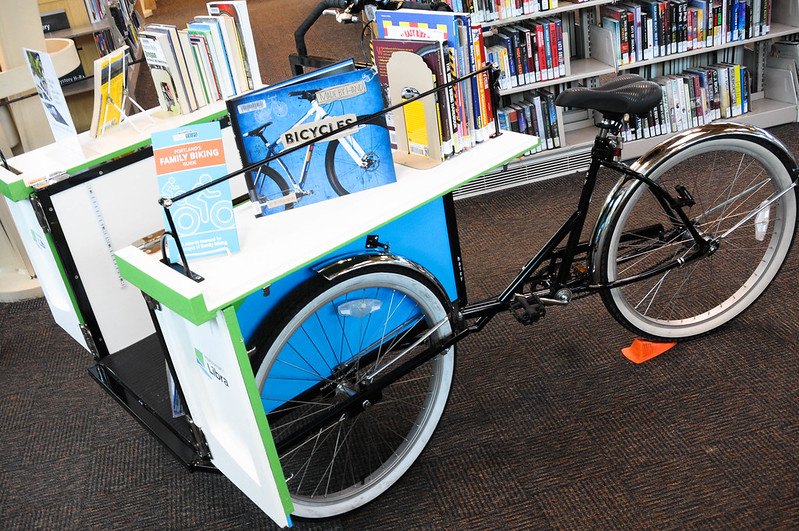 While I was at the Hillsdale Library this morning, Multnomah County Library spokesman Shawn Cunningham was eager to show off their Book Bike. Based on a cargo trike made by Haley Trikes, the Book Bike was funded through the County’s “Curiousity Kick” program. Each year the library makes about $15,000 available for staff to pursue a work-related project. It’s up to each individual staffer to pitch the idea to a group of their coworkers who then vet each proposal and select which ones get funded. The Book Bike debuted last summer and Cunningham says it’ll be out on the roads during Sunday Parkways and at other library events.

If you have little ones, make sure to read them books with bikes featured prominently in the story! We’ve got to start teaching them appropriate transportation as early as possible. And have them enter the bike lane contest. Who knows, the next whimsical bike lane character you see might be the one your own kid designed.

Happy bike month to one and all.

Lucky kids! I want to design one too.