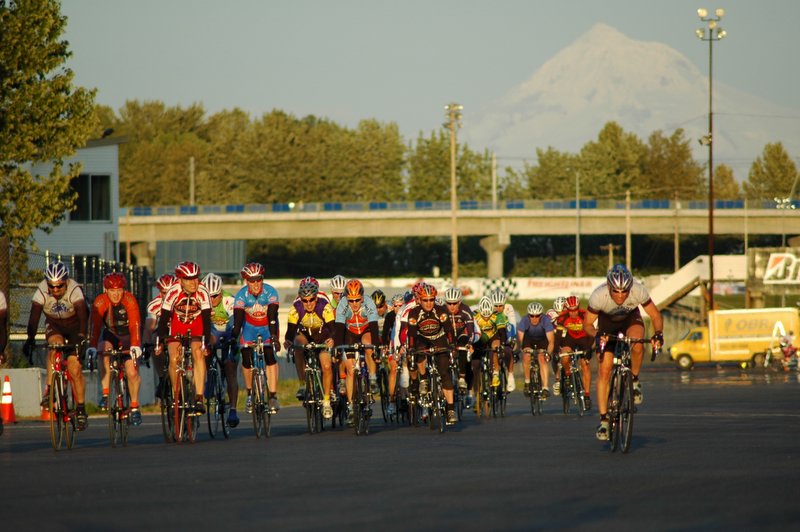 Close to town and carfree, the 2-mile laps of Portland International Raceway are a perfect place to race.
(Photos by J. Maus/BikePortland)

At the end of thge 2016 season, when promoter Jim Anderson walked away from the Race Monday Night series at Portland International Raceway, it could have been the end of a 20-year Portland tradition.

The weeknight series is part of the bedrock of the Portland-area’s vaunted local racing scene, where there’s a race every weeknight during peak season. But Matt Barney didn’t want to see it go. Even though he doesn’t race road bikes, Barney worked at the races last year to get to know people and fill a few hours in his part-time work schedule. When I sat down with him a few weeks ago, the six-year Portland resident (from Seattle) said, “I just love everything associated with bicycles.”

Barney had so much fun at the races on Monday nights, he didn’t want to see that “avenue to be involved with the community” go away. So, when the opportunity to take over the series came up, he sprinted for the chance to grab it. Tonight’s opening race is a chance for Barney to show he can inject new life into the event. His goal is to make it more of an experience for participants and spectators alike. “It’s got to be more than just doing your laps, high-fiving your buddies, and then going home,” he said.

To spice things up, Barney has made several changes for this season: There’s a new fixed gear/track bike category, an emphasis on inclusivity to welcome novice riders, free clinics for new riders each week and a big prize raffle open to everyone who shows up (spectators included). Barney has scoured the city for new partners that can add fun elements to the series. One of them is Royale Brewing, an outfit with a pub just off North Vancouver and Columbia that could become the post-race hangout north Portlanders have been waiting for. They’ll host an after-party each with discounts for racers. Olympia Cycling Team, a Portland-based club with a strong record of shepherding women racers through the ranks, will host the free clinics.

Kenji Sugahara, the executive director of the Oregon Bicycle Racing Association, is thrilled that PIR’s monday night series has new blood. “Monday PIR is a great way for people to get introduced to road racing. The event has been such a great resource and having Matthew re-invigorating it is very exciting. He’s dynamic and thinks outside the box.”

Roll over each Monday night starting tonight at 5:00 pm to soak up — or join — the action. And if Mondays don’t fit in your schedule, there’s a Tuesday night series as well!

This write-up and Matt Barney make me want to try racing at PIR for the first time.

Thanks, Sam. Would love to have ya out!
MB

Would be cooler if it were cars.

Only got to try the Monday Night PIR racing a couple times last year, but it was a blast! Hoping to make it at least a few times again this year.