(Publisher’s note: This week we’re excited to highlight a few of the projects created by students in Portland State University’s Traffic and Transportation course. As we reported in a profile earlier this year, the class has had a vast impact on Portland in numerous ways by churning out over 1,200 smart and inspired graduates since 1991. We worked with class assistant Rebecca Hamilton (a graduate herself who now works at Metro) to share three of the projects. Learn about Amy Wren’s work to improve biking and walking near Bridger Elementary School and Charles Tso’s work on parking benefit districts.)

There are precious few convenient and safe east-west routes for cycling through downtown Portland. In the southwest quadrant I-405, the Park Blocks, and Portland State University buildings are just some of the impediments to cycling access between Washington Park and the Willamette. Ross Peizer (who took a job as program manager with the Westside Transportation Alliance last year) thinks SW Salmon is a good candidate for improvements.

My big idea is a SW Salmon Street Bikeway connecting Washington Park to the Willamette River. Portland lacks a good east-west bikeway through downtown and I thought this would connect two key destinations while creating a safer SW Salmon St for all modes. I live near SW 16th and SW Salmon and when I bike east along SW Salmon it can be stressful sharing the lane with cars. The issue I see and experience is cars going east speeding up the hill and this intersection is at the top of the hill. Visibility can sometimes be an issue due to the parked cars along SW Salmon St. It is a fairly well used intersection for pedestrians with a main entrance to Lincoln High School. In addition, SW 16th Ave is the only way to get through Lincoln High School. I think a protected bikeway would make those who currently bike and walk safer while encouraging others to bike and slowing down the speed of cars.

While looking into this idea and contacting PBOT I came across a couple different plans that made it seem that a SW Salmon St protected bikeway is a ways out, so in the meantime a short-term solution I thought of for the intersection of SW Salmon St and SW 16th Ave would be to test out painted curb extensions which would provide shorter crossing distances for pedestrians and act as traffic calming for cars. I have seen these being done inexpensively in the street with paint and bollards in Austin and Seattle. This would be a cheap way to test out a curb extension before investing in a bioswale. You could even have the students at Lincoln High School help with ideas for the paint designs. This could also be a treatment the city uses all over the city! 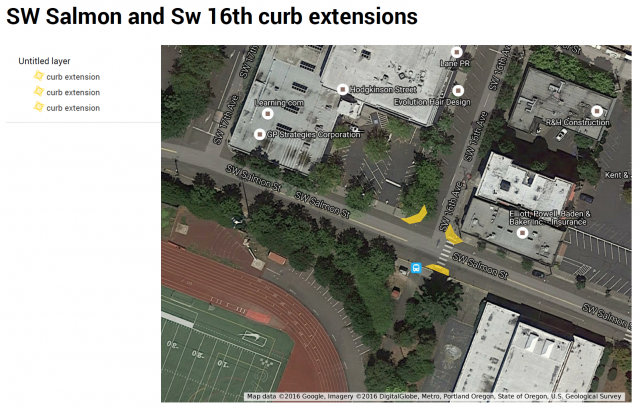 What steps are you taking to make it happen? Have you made any progress?

I have contacted a few folks at PBOT so far. While looking into this idea I came across a number of plans that support a bikeway along SW Salmon St including the Portland Bike Plan for 2030 and the West Quadrant Plan. However, the Lincoln High School Master Planning effort seems to show SW Salmon St remaining as a parent drop off and short term parking zone with curb extensions. I’ve also begun making a list of stakeholders. Those include: Goose Hollow Foothills League (Neighborhood Association), Lincoln High School, TriMet, businesses at 16th and Salmon (and along Salmon Street for larger bikeway concept), apartments near 16th and Salmon, the BTA. If anyone else is interested in this project and wants to help me reach out to these stakeholders/knows these stakeholders, let me know!

What have you learned about trying to make a change in your community? Has anything surprised you?

The class has taught me to be persistent and that change does not come easily. I think it was Rick Gustafson who said, “Your project is not worth anything until you have gotten three no’s.” We discussed how the best ideas have had to ask multiple times. It was also refreshing to hear from folks working for the City of Portland, TriMet, Metro, Portland Streetcar etc. who were just as passionate as the students in the class about creating a world class transportation system that has protected bikeways and sustainable transportation options to support the land use.

This is the final post in our series. Read all three of them here. If you’d like to see this and other projects presented live, the final presentations for the Traffic & Transportation course will be shared on Thursday from 6:40 to 8:40 pm at the Portland Building auditorium, 2nd Floor, Room C. The event is free and open to the public.

I’d love this. ODOT says it is legal to ride east on Highway 26 from Sylvan to Jefferson Street. The shoulder is generally cleaner than Barbur and BH Highway. I actually feel safer on it than Natio Parkway near Barbur in heavy car traffic.

I’ve looked for awhile for a safe route with shade for riding from the west side to SE.

I do this daily, it saves 8-10 minutes off of an inbound commute that would normally go through Washington Park, and I find it to be very safe. Except right now, there are some narrow shoulder sections in construction.

I would too but I take Washington Park because I am worried about the driver who exits early to Jefferson St. using the “bike lane” rather than legally waiting and staying in the car lane. I see it happen all the time when I am driving due to impatience with the tunnel back-up.

Andy, do you mean ride on the shoulder of Highway 26 east-bound? The shoulder is mostly smooth except for the sewer/water covers.

It’s only happened twice in 5 years, but it sticks with you

I used to live at SW 20th and Salmon and Salmon Street is by far the best route to get to the east side, despite it’s complete lack of cycling infra. Adding bike improvements to this street should be a no-brainer. Salmon has four car lanes, so there is certainly plenty of room.

Your description is misleading. It has two travel lanes and two parking lanes.

I call all non-bike-specific lanes car lanes, because that’s what vehicle dominates the usage and the vehicle that actively discourages other uses. If 99% of the space is taken up by cars, then it’s a car lane. Sure, I can technically ride my bike in the car lane, but I am not exactly welcome or comfortable there. Additionally, I can’t park my bike in the parking lane, so it is also a “car” lane.

You can park a sweet moped in the parking lane, though.

Call them what you want, but your description will mislead most people who read it. Maybe that’s your intent, as a way of exaggerating the situation.

In this case, it would be either a travel lane or a parking lane. Which are different things.

Former downtown bike commuter/resident here – moving down hill at the speed of traffic (Eastbound) is never a problem. Grinding uphill with cars honking at you (westbound) is the problem, and there’s no good street for that downtown.

Other than Jefferson, which has a bike lane but is plagued with construction, there is no bike-only westbound path. Couch has some sharrows, I think, but it’s really slow now. Have fun on Glisan.

I like this plan and it can only happen with parking removals.

On the route in the map above, westbound Salmon St is almost un-ridable approaching the 20th street intersection during peak commuting times. Same with WB Park at Vista. The combination of grade (12-18%), gridlock, and parked cars is not good for cyclists.

I think a safer SW Salmon will only result from closing Washington Park to cut-through auto traffic.

So mant cars cut through from W Burnside to access downtown. It’s preposterous.

Why does auto parking in this town take precedence over safe biking? Sad.
At least remove parking on the westbound side of Salmon to provide a protected bike lane for the uphill direction. A no-brainer, but unfortunately something that takes guts.